With a combined total of 13 goals in just two games this week, Luleå now sit seven points ahead of both the second a third place teams. They have also become the first team to reach the 70 point mark this season.

Coming into the week, Luleå had won five of their previous six games, however they were also coming off a CHL semi final loss to Frölunda and were looking to bounce back.

Their first matchup of the week came against a Rögle team who were also hoping to have a bounce back game as they had lost their previous two contests. The game turned out to be a offensive brawl between the two teams.

The first period saw Luleå strike twice in the first half of the frame and Rögle responded with one of their own. Luleå also managed 13 shots on net and held Rögle to just 6. The second period is when the offence exploded.

Both teams came out of the gate flying in the second frame and combined for a total of 24 shots in the period, plenty of which found their way into the nets. A total of four goals, two for each team, were scored in just over a five minute span in the first half of the frame. Luleå followed that up with another before the end of the period and carried the 5-3 lead into the third.

Luleås offence was far from done however, as they continued to generated chances in the frame and were rewarded with another pair of goals in quick succession to give them a comfortable 7-3 lead. Rögle did manage to get one back but fell well short of the win as Luleå cruised to a three point victory and handed Rögle their third straight loss. The second matchup of the week for Luleå would see their offence pick up right where it left off against Rögle. 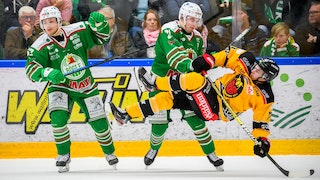 Facing off against an HV71 team who were on a three game losing skid and who they had already beaten twice this season, Luleå came out with confidence.

Luleå showed no signs of slowing down after their seven goal performance on Thursday as they scored five unanswered goals, three in the first and two in the second. Not only did they dominate on the score sheet, but Lulea heavily outshot HV71 in the first two frames as well. Despite finding themselves down 5-0, HV71 refused to quit as they managed to find the back of the net before the end of the second frame and gave themselves a fighting chance heading into the third.

HV71, looking to mount a comeback, got the first goal of the frame to pull themselves back within three. Unfortunately, not long after that, Luleå regained the four goal lead and despite one more from HV71, they were unable to contend with Luleås red hot offence. The 6-3 win gave Luleå the full three points and propelled them to 70 points on the season.

Luleås red hot offence will look to continue their success this week as they face off against Örebro and Brynäs.

Our game of the week this week came back on Saturday afternoon as Frölunda and Färjestad faced off in Scandinavium. It was the third matchup between these two teams and the season series was tied at one game a piece.

The first period would start off with a pair of goals for Ryan Lasch, unfortunately for the American, both of them would be waived off. The first came on the man advantage after the initial shot created a scramble in front of the net. Lasch was able to fire it home, but Rhett Rakhshani and Simon Hjalmarsson both found themselves inside the crease and the goal was waived off after a video review. The second disallowed goal was originally signaled as a goal on the ice, but after a brief discussion between the officials it was waived off due to a hand pass from the captain Joel Lundqvist.

Despite the frustration of two dissalowed goals, Frölunda kept pressing and were rewarded with a shorthanded tally. Patrik Carlsson was able to break up Färjestads attempt to move into the offensive zone and sprung Johan Sundström on a partial break, he was able to snipe it home from the high slot to give Frölunda the 1-0 lead. Frölunda was able to follow that up with a bit of lucky one from Sebastian Stålberg. His centering pass attempt deflected off the stick of Linus Arnesson and popped up and over Arvid Holm, who then knocked it into the net with his glove. Frölunda would carry the 2-0 lead into the second frame. 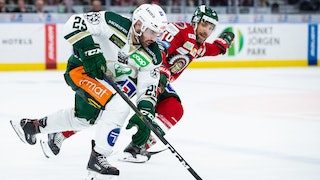 Färjestad wouldn't take long to respond with a goal of their own in the second. The Captain, Linus Johansson, intercepted the clearing attempt at the blue line and snapped home a wrister that beat Johan Mattsson far side to pull the game back within one. With some momentum back on their side, Färjestad would get things all tied up on the man advantage. Per Åslund walked out of the corner and his attempt in close rebounded right to Daniel Viksten who was able to ripple the mesh to tie the game at two. Despite multiple chances for both teams in the remainder of the frame, neither was able to break the deadlock heading into the final frame of regulation.

Despite multiple chances in the third, including two post shots and a breakaway, neither team seemed to be able to break the tie. However, with about five and half minutes remaining in the third, Ryan Lasch would finally get one that would count. Viktor Ekbom was able to glove down the puck right and the blue line and send it to Lasch down low. Lasch then tried his luck with a perfectly placed shot from below the goal line that found its way off the back of Arvid Holm and in to give Frölunda the 3-2 lead and eventually the 3-2 victory.

With the win, Frölunda snapped a four game losing streak and took the 2-1 season series lead against Färjestad. The final matchup of the season between the two teams will take place on February 20th.