With a historic season under their belt, Rögle is hoping to cap it off with their first ever SHL title and Växjö is looking for their second title in just four years. This is the battle for the Le Mat Trophy!

After dropping game 1 last Sunday, Rögle was looking for a quick turnaround as the teams were back on the ice for game 2 on Monday night. One of the biggest bright spots for Rögle this season has been the play of SHL rookie Adam Tambellini who continued to produce over the past week. He was able to open the scoring in game 2 in the first frame as Rögle jumped out to the early lead. The Lakers would respond with a goal from Emil Pettersson in the 2nd but Rögle answered right back and carried the 2-1 lead into the final frame of regulation. That lead was short live as Pontus Holmberg tied the game early in the 3rd and neither team was able to break the deadlock before the buzzer sounded to signal the end of regulation time. The extra frame would not last long as a long shot from Hardy Häman Aktell would find its way through and the young defencemens second career post season goal would give the Lakers the 2-0 series lead.

Heading into game 3 Rögle knew they were looking at an almost certain do or die situation. They knew very well that no SHL team has ever come back from a 3-0 series defecit. In fact in European hockey history its only ever been done 5 times throughout 4 leagues and never in a final series. Rögle needed a big game and that's exactly what they got.

After a shorthanded 2 on 1 goal by Dennis Everberg, Daniel Zaar was able to bury the second of the game after a turn over right in front of the net. Rögle would outshoot the laker 13-7 in the first frame and carry their two goal lead into the 2nd. The 2nd was much of the same from Rögle as they continued to pepper Erik Källgren between the pipes. Adam Tambellini would pot his sixth of the post season on the powerplay in the 2nd to increase Rögles lead to three heading into the final frame. Växjö refused to give up though as Marcus Sylvegård was able to pull the Lakers back within two early in the 3rd period. However, despite outshooting Rögle in the frame and having a number of good chances, the Lakers would give up another pair of goals before the final buzzer and Rögle came away with the big 5-1 and much needed win.

Game 4 was a much tighter affair on Saturday afternoon as the Lakers were once again looking to take a stranglehold on the series and they came out firing on all cylinders. Outshooting Rögle 12-8 in the 1st they managed to score the opening goal after a redirect from Brendan Gaunce found its way in. The 2nd would be a much different story, however, as Rögle would answer back with a pair of goals from Anton Bengtsson and Niklas Hansson and carry the 2-1 lead into the 3rd period. The lead for Rögle would not last long in the 3rd as Richard Gynge's marker just over five minutes into the frame would tie the game and be the final goal in regulation. It would take exactly 60 seconds into overtime for the Lakers to find the winner. A scramble play in front was finished off by Pontus Holmberg and Växjö took the 3-1 stranglehold lead on the series.

Game 5 is played tonight Monday. Växjö can secure the gold medals and for Rögle it is only win that counts. 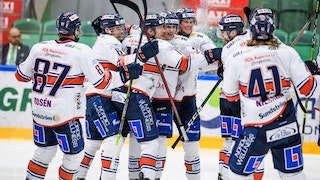