The Quarterfinal round has seen three of the four series end in sweeps, perhaps an unexpected outcome for some, and the fourth and final series to be decided could wrap up tonight. We also now know the outcome of the play-out round as a longtime SHL team will be missed next year on the ice.

With a 2-0 series lead against Färjestad coming into the week, The Växjö Lakers showed no indication of slowing down in game number 3 on Tuesday night. Backed by a fantastic 30 save shutout performance by Viktor Fasth the Lakers rippled the mesh with a trio of goals to not only win the game by a score of 3-0 but also take the 3-0 series lead, with an opportunity to finish it on Wednesday night in Karlstad.

Staring down the barrel of elimination, Färjestad needed four straight wins to come back from the 3-0 deficit, something no SHL team has ever done. Game 4 started with an opening goal from Färjestad, followed by a pair of Lakers goals in the first frame. The second was an almost mirror opposite as the Lakers opened the scoring in the frame but Färjestad followed that up with a pair of their own to tie the game at three goals a piece. Despite the offence in the first two frames the third would remain goaless and the game would go to extra time. Almost two full periods of overtime were needed to find a winner as the Lakers absolutely peppered Arvid Holm in the two overtime frames as they outshot Färjestad 23-8. They were finally able to slip one past him with just over 5 minutes to play in double OT as Fredrik Karlström ended the game and the series with his goal.

Perhaps one of the most surprising outcomes in the quarterfinal matchups was the dominance of Örbero and their offence against Leksand. Boasting arguably the best line in the regular season, many people had Leksand slated to move onto the semifinal final round. However, Örebro had different plans and they made their mark in the first round with massive offensive numbers and a great performance between the pipes by Jhonas Enroth. After a big 6-1 victory to open the series, game two was a much tighter contest as all the scoring in the game came in the second frame. The two teams both found the back of the net, but Örbero carried the slight 2-1 lead into the third frame and Jhonas Enroth turned aside all 12 shots he faced to hang on for the win and grab the 2-0 series lead. After a brief rest on Tuesday, the teams were back on the ice for a Wednesday night matchup in Örebro. Just as they did in game 1, Örebros offence exploded, opening up a 5-0 lead before the end of the second frame and adding two more in the third. A lone goal from Leksand at the end of the second was the only tally in the game as they fell to 0-3 in the series, and as previously mentioned no SHL team has ever battled back from that deficit.

Just like game 2, game 4 was a tight battle until the very end as a 1-1 game would need extra time to determine a winner. Unfortunately for Leksand it didn't take long for Örebro to send them home as Emil Larsson found the back of the net just 1:15 into the overtime period. With the goal Örebro sealed the series win and moved onto the semi final round for the first time in club history. With three games played in the first round Jhonas Enroth registered a 1.01 GAA and a .957 SV% on 66 shots faced. 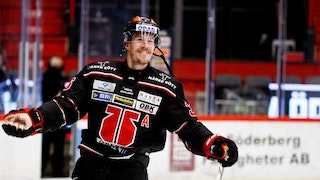 Rögles dominance in the regular season seems to have followed them into the playoffs as they had a decisive series win against the Frölunda Indians. Coming into the week with a 2-0 series lead, the team from Ängelholm had outscored their opponents in the first two games 9-2 and had no intentions of slowing down. Frölunda could not get any kind of offence going in games 3 and 4 as Rögle completely over powered them with a 5-0 and 6-1 victory to easily move onto the semi finals. With the four game sweep, Rögle managed to outscore Frölunda 20-3 in the series and will carry plenty of optimisim and momentum into their first semi final appearence. Being just their 3rd ever playoff appearence and winning their clubs first post season game this year, Rögle is in uncharted territory and every accomplishment from here on out will be a first in team history.

The most entertaining and exciting series of the post season so far has been the matchup between northern rivals Skellefteå and Luleå. It comes as no surprise that this has been the tightest series of the quarterfinals as both teams are backed by stellar goaltending, solid defence and plenty of offensive capability. Game one was a long overtime game that Skellefteå managed to win in the dying seconds of double OT. Game two was a quick turn around as the teams were back it Monday night in what turned out to be another tight contest. A late goal with the net empty managed to bring Skellefteå back within one, but it was to little to late as Luleå held on to tie the series at one game a piece. Game 3 was a goaltender dual as Joel Lassinantti and Gustaf Lindvall stood tall between their pipes and both put forth spectacular games. But it was Daniel Sondell who would play hero in this one as he managed to score the only goal of the game late in the third period to propel Luleå to the 1-0 win and grab the 2-1 series lead.

Game 4 would see an emphatic response from Skellefteå as they would give up the first tally of the game but respond with four unaswered goals. Backed by an incredible 36 save performance by Arvid Söderblom Skellefteå tied the series at 2. Game 5 was the only SHL action on Saturday afternoon and not to be outdone, Luleå responded with a big win of their own. In what was an almost mirror opposite result of game 4, Joel Lassinantti posted 37 save performance and got help from his offence as Luleå put 5 past Gustaf Lindvall to come away with the 5-1 win to take the stranglehold on the series. Luleå has an opportunity to finsih the series tonight at home.

Despite the entertaining hockey in the four quarterfinal matchups, perhaps the most anticipated and most watched series this past week was the play-out round between HV71 and Brynäs. Having won the first two games of the series, Brynäs was looking to take a stranglehold on the series on Monday night. HV71, however, battled hard in game three and avoided an 0-3 series situation with a 2-1 win. Unfortuntely for HV71 that would be the only success they would have in the series. Thursday night saw Brynäs win game 4 by a score of 4-1 and the final game of the series was an overtime thriller that saw Oula Palve secure Brynäs' spot in the SHL next season. With the loss HV71 will play in second tier Swedish hockey for the first time since the 84/85 season. 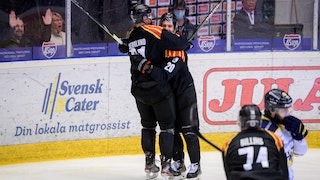 Some of the SHL Awards have also been announced this week. 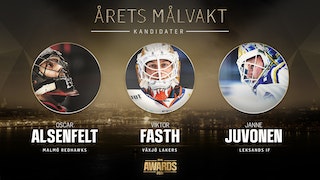 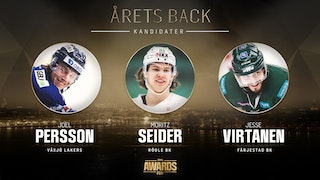