SHL rookie goaltender Matt Tomkins put on an incredible performance between the pipes for our team of the week this week. We also take a look at individual player news over the past seven days.

Our first team of the week this season is Frölunda. The team from Gothenburg came away with a full six points in their two games this week against two teams who are expected to be top competitors this season.

Their first game of the week came on thursday evening as they visited Skellefteå for their first matchup of the season. The game turned out to be a goaltending duel as SHL veteran Gustaf Lindvall and SHL rookie Matt Tomkins, making his league debut, went head to head between the pipes. Throughout the first two periods neither goaltender looked as if they would break and allow a goal. Tomkins, however, was the busier of the two as he faced 10 shots in both of the first two frames. Lindvall faced just over half of those shots and the game remained deadlocked heading in to the final frame of regulation.

The deadlock was finally broken early in the third period as a quick wrister from Jacob Nilsson fooled Lindvall and gave Frölunda the lead and, what would eventually be, the game winner. An empty net goal late in the frame would give Frölunda the 2-0 victory as Matt Tomkins would finish his SHL debut with a 25 save shutout performance.

– It doesn't get much better than that really, amazing start, but more importantly a good game for our team... I'm just happy to be a part of it, to do my part and give our team a chance to win. Said Tomkins after his debut.

The second game of the week for Frölunda was also against a tough opponent as they returned home to host Luleå in what would prove to be another tight game and another great performance from Tomkins.

The hero against Skellefteå, Jacob Nilsson, would continue to produce as he was able to open the scoring late in the first frame. With just 20 seconds remaining in the opening period he was able to find the back of the net, giving Frölunda the 1-0 lead heading into the first intermission. Luleå would come out hard in the second period, heavily outshooting the home team 12-5 in the frame, however Tomkins stood tall until very late in the frame. With just 15 seconds remaining in the period Brendan Shinnimin was finally able to beat Tomkins to even the score heading into the final frame of regulation.

The third period would be another exciting frame with great goaltending as both teams peppered the net looking for the winner. Frölunda would finally break the deadlock with just under six minutes remaining in regulation as a hard wrist from the slot by Elmer Söderblom would find the back of the net. Frölunda would hold on to the lead an come away with the 2-1 victory. Matt Tomkins, with another great showing, finished with a 29 save performance. 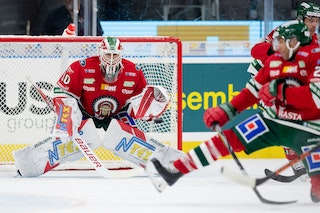 Patrik Berglund and Brynäs have mutually decided to part ways. The former NHLer returned to Sweden 2019 to play with Djurgården for one season before he went to Brynäs before last season. He scored 13 goals and added 14 assists in 45 games played for Brynäs.

– After talks, we have come to the conclusion that it is best for both parties to end the contract, says Brynäs General Manager Johan Alcén.

Färjestads Sebastian Erixon has, unfortunately, been forced into retirement due to concussion complications. Erixon exited the season last year after only 17 games played in his first season as Färjestads new captain. He suffered a severe concussion and has not been able to fully recover since the hit.

– It is so difficult to describe how I feel, but simply explained, life has been turned upside down for both me and my family after the injury. I have had concussions before in my career, but here and there I have been back after a few weeks. I thought it might be a bit like that this time too, but… it has been anything but that, says Erixon.

Erixon made his SHL debute, then Elitserien, back in the 2006/07 season with Timrå. He became a mainstay on the Timrå lineup two seasons later. Erixon then moved to North America for a single season in the AHL with the Chicago Wolves before returning to Timrå the next season. After a pair of season with Växjö Erixon found his place in Färjestad where he played the remainder of his career. He finishes with 527 games played, scoring 38 goals and adding 107 assists.

– The only thing I want is to be able to come back as the playful father my children had before, the alert and happy man that Gabriella has chosen to live her life with. That is the most important thing, says Erixon. 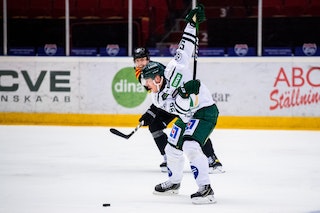 Petr Zámorský has been training with Örebro for the past two weeks hoping to grab a full time spot on the roster and his hard work has been rewarded as he has signed a contract for the season.

Zámorský had previously played with Örebro from 2014 - 2017 before returning to the Czech League. The 29 year old defenceman is expected to make his return to SHL hockey later this week.

The young Austrian Marco Kasper has been rewarded with a full time contract with Rögle. He made his debut last season, playing in 10 games. He scored his first SHL goal against Leksand this past weekend and in CHL play has registered four points in five games.

– What an impressive young man this is. He has truly deserved everything he has since he came to us. He just keeps evolving. I am very happy for his sake, that he was able to score his first goal the same night he gets his first SHL contract, says Rögle's General Manager Chris Abbott.

Kasper will be eligible for next summer NHL entry draft and his contract with Rögle is valid through the 2023 season.