Jonatan Berggren left home at the age of 15 to pursue his hockey in Skellefteå. It has not always been easy, but in the middle of what must be seen as his breakthrough season, he finds it easy to say the words: "It was all worth it."

Between 2011-2016, Skellefteå AIK reached the finals six straight times, winning twice, adding another finals appearance in 2018. The former (?) powerhouse in the league is building something new. Walking downtown in the Västerbotten town of Skellefteå, one doesn't have to look far to find flags, posters or other stuff showing that basically the whole town is behind the team. And with the season he has, Jonatan Berggren is no longer completely anonymous in the street.

He laughs. "No, but it's pretty okay. Some people come up and say a few words about the last game or so, but nothing more than that. I think the older guys get more of it," he says, continuing:

"It's really amazing, being able to live the life I do up here. It's awesome that everyone is so updated on the team and how we're doing."

Although being a bit unlucky, Berggren doesn't feel there's any difference from last year, despite Skellefteå changing coaches in the off-season, as Andreas Falk taken the reigns after Tommy Samuelsson.

"I can't really tell the difference, no. It has been a natural transition with him coming on. Our style of play is pretty similar to earlier years, I feel we play the same style this team has played in the last ten years," he says.

Having lost to Linköping (2-1) last Tuesday, Skellefteå turned the tide and won the other two games of the week and that might be the start of something. 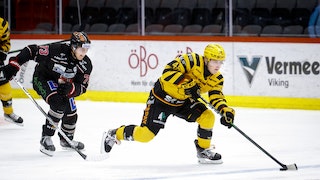 "It has felt like every goalie we've played has had their night of the season. But it's a matter of details. It would have been far worse if we had lost every game by five goals. Focus on the details and we could win by those margins," he says.

Jonatan Berggren is now in his fourth season in the SHL and the biggest change has been to adapt to a bit more defensive structure.

"If you compare to ten years ago, the SHL is a bit more defensive now. Every team is forechecking and everyone is really well trained. That puts the pressure on the more skilled players, whose time and space is vastly reduced." he says with a hint of laughter. "It makes it more difficult for us wanting to create something."

Does he discuss offensive plays with the defensmen to get some hints and tips?

"Sure, we talk. But that is more in regards to the powerplay. What's difficult for the d-men, how are we to make our set plays, stuff like that."

Nevertheless, looking at the stats, Berggren has adapted well. Back to that in a bit.

Born in Uppsala and having spent his entire life in Enköping, representing Enköpings SK, Jonatan Berggren moved to Skellefteå at the age of 15. Normally, players tend to move for hockeygymnasium (literally translated to hockey high school) at the age of 16 but there's a story to his early move. With young Mr. Berggren playing between one and five years above his age, this resulted in a spot of trouble. Where would he play?

"It was almost a sealed deal that I was going to Västerås to play there but I got a call from Fredrik Öberg, U18 coach in Skellefteå at the time. He asked me if I wanted to come up and check things out for the hockey high school in the following year."

Berggren and his older brother went and after a day in Skellefteå, it was all set. And not only that: Berggren didn't want to wait. He wanted to move right away, moving to finish elementary school, by completing ninth grade, in Skellefteå.

"Everything felt perfect. We called Öberg, asking him if I could move right away and he put it all together. Me playing here today is all thanks to him. I got his number as well, 48. So that's a perfect, nice little story, I think." he says with a fond voice, adding that homesickness has got the best of him from time to time. But looking back, and looking forward to what might come, he doesn't regret anything. Having been drafted by the Detroit Red Wings, he knows he is on the right path.

"Of course! Playing in the NHL is something I've been thinking about, and dreaming of since I started playing. And now I'm closer to realising that dream than ever. It's all about that final push. And if I think about all the work I've put in to be able to try to make that push...It has all been worth it." 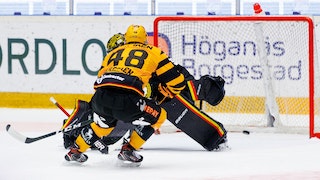 Looking at the top scorers of the league it is hard not to glance by Jonatan Berggren. Last season, Berggren finished with two goals and ten assist in 24 games during an injury plagued season. But this year, being rid of injuries, Berggren has been...well, pretty much everywhere, scoring four goals and adding 14 assists in 16 games so far.

"I've built confidence and everything feels easier. It feels like the game is in slow motion. It is kind of nice being in that zone, having that feeling. You see passing lanes that are so obvious, yet they're not. I've been on the other end of that, when a two metre pass is the hardest thing in the world," he says.

He says he hasn't changed a whole lot to his game prior to this season. Or at least, he can't pinpoint it:

"I don't know. I'm trying to get to the net more. But I had a good start to the season and I've been able to build off of that. To me, last season was important. I got a receipt that I could play at this level and do my things."

Getting back to the start of this season, he continues:

"It was really nice to score in the first game. A goal can give you a boost just like that. To score and get points on the board right away was a relief. Every point makes you grow, but scoring is a different feeling."

Music Genre: "I listen to anything from Norwegian party music to 80's stuff to...well, anything."

Meal: "I'm the worst at cooking! I eat ready made stuff, hahaha!"

NHL Team: "The Red Wings thanks to all the Swedes playing there."