With the final games of the season taking place this week there were a lot of possibilities when it came to which teams were going to finish where in the standings. Oskarshamn was one such team. Despite a tough 6-1 loss to Växjö on Tuesday evening, their fate was still in their hands coming into Thursday nights final game of the season against Djurgården.

Thursday night was a big one for Oskarshamn as they were looking for their first ever SHL playoff berth in team history, all they had to do was win.

In front of a packed house in Oskarshamn they got the start they were hoping for as Johannes Salmonsson opened the scoring in the first period with a bit of a controversial goal. The initial shot from John Dahlström was saved by Mantas Armalis and knocked into the air. As it came down Salmonsson slid into the crease and knocked the puck home with his skate. After a lengthy review, it was deemed a good goal and Oskarsham took the one goal lead into the second period.

Despite the lack of scoring in the first, the second was much more lively as Oskarshamn increased their lead to two in the first minute of the frame as Kim Rosdahl would strike on the powerplay. Joakim Thelin would follow that up just a few minutes later to give Oskarshamn the 3-0 lead. Despite Oskarshamns dominance in the first half of the period, it would be Djurgårdens turn to answer back in the later stages of the frame. Sebastian Strandberg and Emile Poirier would score a pair of goals in under two minutes to pull Djurgården back within one heading into the final frame of regulation.

Despite the momentum shift at the end of the second period, Djurgården was unable to turn that into a game tying goal in the third as Oskarshamn would hold on to their one goal lead and clinch their first ever SHL playoff berth with the win.

It was once again a packed house in Oskarshamn as fans were excited for their teams first ever playoff game and the home team would not dissapoint. Having finished 9th in the regular season after their win on Thursday it meant Oskarshamn would be facing off against Leksand in the best of three series.

Not only would this game be packed with chances and excitement it also turned out to be a great duel between the two goaltenders. Tim Juel for Oskarshamn and Kasimir Kaskisuo for Leksand would be the reason the game went to the first intermission locked at a scoreless tie, making 21 saves between the two of them in the opening frame. It looked as if the game would continue that way through the second period until the final few minutes of the frame. The opening goal and first ever playoff goal in team history was scored by none other than Johannes Salmonson with a great display of hand eye coordination to bang the puck out of mid air and into the back of the net. That would be the only scoring we get in the opening forty minutes of the game as Oskarshamn carried the tenuous one goal lead into the third.

It would be Patrik Karlkvist, the teams goal leader in the regular season, extending the lead in the opening minute of the third frame on the powerplay. Despite Leksand putting fifteen shots on net in the frame, they just couldnt seem to put anything past Juel. Kim Rosdahl would secure the victory with a long empty net goal to put them up by three. Unfortunately for Juel, he would not come away with the shutout as a late goal from Leksand broke the goose egg, but it was to little to late for the visitors as Oskarshamn secured their first ever playoff victory in a very important game one of the best of three series. 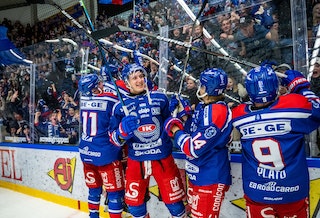 Färjestad locked up some key pieces this week as they have inked both Michael Lindqvist and Dennis Hildeby to new contracts.

The young Hildeby showed great promise this season in his limited play between the pipes. In seven appearences this year he posted a 3-2 record with a 1.93 GAA and .931 SV% with one shutout. The new contract will keep him with the team for the next two seasons.

– It's good to be safe. That you still know that you have two years ahead of you, safe and clear in some way. I will compete to take a jersey next season, that is my plan, says Hildeby to the club's website.

On the other side Lindqvist is an SHL veteran and in his fifth season with Färjestad. The 27 year old agreed to a new three year deal with the team this week.

– We are extremely happy that an important piece of the puzzle chooses to extend with us. Michael has shown me a lot by choosing to be part of the investment in the future towards the common goal. In his best moments, he is one of the leagues absolute biggest offensive threats, and also has a strong character off the ice, says Färjestad's sports director Rickard Wallin to the club's website.

Oskarshamns has signed young Hampus Plato to a big team contract after the 19 year old reached his 100 minute mark this week. The 19 year old appeared in 34 games this seasonscoring two goals and two assists.

– Hampus has taken great strides and been really good. He has taken more steps the further into the season we have come. We have signed a two-year contract with him to see what we can do with him and what development he can get, says the club's sports director Thomas Fröberg.

Tony Sund made his SHL debut this year with Rögle and obviously made an impact as he has been signed to a new deal. The 26 year old Finnish defender put up 6 goals and 10 assists in 45 games this season.

– Tony has gotten better and better during his first season here. He has become a top defender who can play in all situations. There is more to pick out and we are very happy to have him here for at least another year. He loves to play here and that is something we value highly, says Rögle's sports director Chris Abbott to the club's website.

The contract is valid through next season. 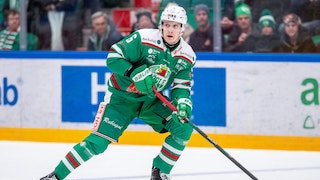