A pair of three point wins this week moves Örebro in to second as their early season success continues.

Team Of The Week

Coming in to the week, Örebro sat on the bubble spot in sixth overall. Hoping to improve their standings they kicked things off this week with a contest on the road in Leksand.

The game would be tightly matched throughout as both teams exchanged chances. Both goaltenders certainly earned their pay as Dominik Furch faced 32 shots against and Janne Juvonen faced 31. The difference in the game, however, would be the powerplay opportunities for Örebro. Giving up three man advantages to Örebro, Leksand weren't able to hold them off as Örebro capitalized on two opportunities and came away with the 5-3 win. Leksand fought hard until the end, pulling the game back to within one in the third, but an empty net goal by Ryan Stoa sealed the win for Örebro and secured three points in the standings. 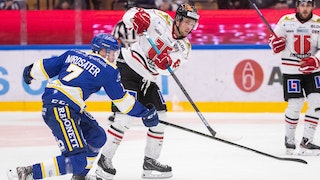 Örebros second matchup of the week was a much bigger test as they faced off against league leaders Rögle on Saturday night. Another tight contest with lots of shots on net, both teams exchanged goals in the first two frames as the game would head to the third all tied at two goals a piece. Despite absolutely peppering Roman Will between the pipes with 17 shots on target, Örebro could not break the deadlock for most of the frame. That was until Shane Harper intercepted an outlet pass and moved in all alone, making no mistake he was able to rip one past Will with less than two minutes to play and Örebro would hold on for the 3-2 victory and leap frog over Rögle in the standings.

With the win Örebro has now won six of their last seven games and will look to continue their hot streak this week with matchups against Färjestad and Skellefteå.

Our game of the week on the English language world feed was a contest between the two most northern teams in the league back on Tuesday night. Skellefteå playing host to Lulea in the first matchup between those two this season proved to be an exciting game.

Both teams came out hard in the first and generated a number of shots on net and a number of good chances. The scoreless deadlock was broken by Luleå on the powerplay as the initial shot from the line was turned aside by Gustaf Lindvall, but Petter Emanuelson was able to poke home the juicy rebound to give Luleå the 1-0 lead heading in to the first intermission. Despite generating 11 shots on goal in the frame, Skellefteå was unable to solve Joel Lassinantti between the pipes. 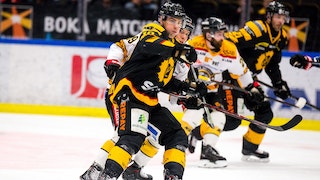 The second was much of the same as both teams improved upon their shot totals from the first period with Skellefteå firing 12 shots on target and Luleå generating 15. Unfortunately for Skellefteå, one of those shots hit Gustaf Lindvall in the head and forced him to come out of the game, replaced by Oskar Östlund. Östlund played well between the pipes but Luleå was able to increase their lead to two as, once again, Petter Emanuelsson on the powerplay was able to send it past Östlund to make it 2-0. Skellefteå would have an answer before the end of the frame. On the man advantage, Tom Pyatt attempted a centering pass and got a fortuitous bounce off the leg of Pontus Själin that deflected past Lassinanti to pull the game back within one. The second period would finish 2-1 in favour of Luleå

Skellefteå would come out hard in the third looking for the game tying goal. Heavily outshooting Luleå in the frame they were finally rewarded near the halfway point of the period as Joakim Lindström took the feed out front and slipped it past Lassinanti to tie the game at two. Unfortunately for Skellefteå, the tie would not last very long. Daniel Sondell intercepted a pass in the neutral ice and sprung Robin Kovacs on the breakaway, making no mistake Kovacs was able to beat Östlund five hole to give Luleå the 3-2 lead and the win.

Frölundas hot streak continues as they were able to move in to top spot this week and became the first team to break the 30 point mark. Örebros six points moves them in to second and drop Rögle in to third. Färjestad remains in fourth and Luleå jumps in to fifth, knocking Djurgården in to sixth. Skellefteå was the biggest faller this week, dropping from third all the way in to eigth this week. The bottom four remain relatively the same with Linköping, Leksand, Brynäs and Växjö all battling to move back in to the top ten.