With two big wins this week, the Frölunda Indians move back in to top spot in the standings.

Coming in to the week, Frölunda was on their first skid of the season. At the start of the week Frölunda had lost just six games all year, however, three of those losses had come in their past four games. They were hoping to turn things around this week with matchups against Leksand and Linköping.

It was the second matchup of the season between Frölunda and Leksand, with Frölunda coming away with the 4-2 victory back on October 3rd. This matchup, however, would prove to be a bit more lopsided.

The game was all Frölunda right from the get go. An early tally in the first put them up 1-0 and Leksand wasn't able to respond. The second proved to be much of the same for Frölunda as they peppered Janne Juvonen between the pipes with 20 shots in the frame, 2 of which found their way home. Despite being outshot, Leksand generated some chances and put up 10 shots of their own in the period, However Niklas Rubin turned aside all shots he faced in the second. The Third period would be the nail in the coffin for Leksand as the Indians offence exploded in the final frame.

Brandon Gormley kicked things off with a blast on the powerplay to make it 4-0. Just a couple minutes later Nicklas Lasu made it 5-0. Frölundas offence didn't slow down all period long and, despite giving up one goal in the final frame, were able to come away with the big 7-1 victory. The victory marks the fifth straight in Scandinavium for Frölunda and their third straight against Leksand. 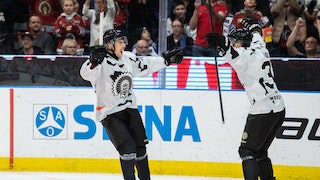 Frölundas second matchup of the week was on the road as they visited SAAB Arena to face off against Linköping. The second matchup of the season between these two teams started with a tight first period. Despite being heavily outshot 14-5 in the opening frame, Linköping managed to keep the game tied, thanks in no small part to the play of Jonas Gustavsson between the pipes.

Linköping would battle back on the shot clock in the second, outshooting Frölunda 10-8. Rookie Lucas Raymond would finally break the deadlock near the halfway point of the period, but Joe Whitney would answer back just a minute and a half later. The second would end in a 1-1 tie.

The third period was all Frölunda as the vistors came out hard, fast and firing on all cylinders. Outshooting Linköping 17-3 in the frame and putting up 3 unanswered goals in quick succession was enough to come away with the 4-1 win, handing Linköping their second straight loss.

The full six points for Frölunda this week returns them to the top spot in the standings and they'll look to continue their success with matchups against Oskarshamn and Färjestad this week.

This weeks game of the week came back on Thursday night as Rögle hosted Färjestad in Catena Arena. It was the second contest between these two teams this season with Färjestad winning 5-3 at home back on October 17th, so Rögle was hoping to return the favour. This game would prove to be a very busy outing for both goaltenders as Rögle would put up 38 shots on net and Färjestad responding with 35 of their own.

The first would prove to be the busiest frame for the goalies with Christopher Rifalk facing 12 shots and Arvid Holm facing 16. It didn't take long for one of Färjestads numerous shots to find its way whome as Marcus Nilsson scored a beautiful goal on the wrap around to give them the lead. Nils Höglander was able to tie things at one as he stole the puck at his own blue line, used his speed to move in to the offensive zone and snapped home his first of the game. The final tally of the frame came from Victor Edjsell who backhanded home the lose puck to give Färjestad the 2-1 lead heading in to the first intermission. 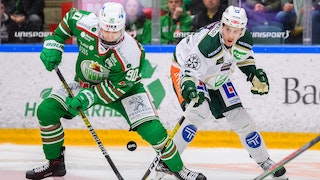 The second frame would prove to be a tough one for Rögle as the vistors managed to put up two goals in the frame, one from the Captain Linus Johansson and another from Carl Jakobsson. The two goals in just over a minute and a half was enough to end Christopher Rifalks night early as Roman Will came in to replace him. Will was solid between the pipes for the remainder of the game, and the second would finish 4-1 in favour of Färjestad.

Despite trailing by three, Rögle was not ready to give up and they came out looking to mount a comeback in the third. They got the start to the frame that they were hoping for as Adam Edström gloved the puck down at the blue line and beat Holm with a backhander up high to pull them back within two. They'd get more life in the final frame thanks to a rebound opportunity for Anton Bengtsson, who was able to pull it around Holm and ripple the mesh to pull them back within one. Unfortunately for Rögle, they were unable to get things tied up before the final whistle and fell 4-3 to Färjestad. It was a big win for Färjestad as well, as they now sit 3 points ahead of Rögle in the standings.

All teams in the top six remain there this week with Frölunda moving in to first and Örebro dropping in to third. Färjestad remains in fourth and Rögle and HV71 switch places in fifth and sixth. The only change in the bottom half of the standings is Brynäs moving in to tenth, which knocks the Lakers and Linkoping down in to eleventh and twelfth respectively. Oskarshamn and Leksand remain in the bottom two spots in the league.

Check out this weeks top goals and saves: