This week was a bit unique when it comes to scheduling, due to the ongoing pandemic and game postponements fans were treated to at least one game a day for all seven days this week. It kicked off with back to back meetings between Rögle and Timrå in Ängelholm. Neither team had been especially good in their previous five games, as both had just a pair of games in that span. However, these games were arguably more important for Timrå as they are trying to claw their way out of the bottom two, in hopes of avoiding regulation.

Monday nights game was as close as they come and both teams put forth a solid sixty minute effort, that included great goaltending from both Christoffer Rifalk and Jacob Johansson.

The first period was fast paced and without a lot of stoppages. However, that did not translate to a lot of chances for either team. Both teams played well defensively and held the other teams offense in check. Rögle managed just six shots on target and Timrå was held to just three of their own. Neither team would find the back of the net in the opening frame.

The second period was a much different story, at least for Rögle. They came out firing on all cylinders and absolutely hammered Johansson between the pipes with sixteen shots on target and held Timrå, once again, to just three. The deadlock was finally broken about twelve minutes into the frame on a Rögle powerplay. A scramble out front caught Johansson out of position and Leon Bristedt was able to bury the opening goal into an almost open net. Despite the continued pressure from Rögle, the game would head to the third period with just the one tally being scored.

The third period saw a complete reversal from the second as it was Timrås turn to pour it on. Despite managing just six shots in the opening forty minutes, the third period saw them hammer Riffalk with seventeen shots on target. However, despite their best efforts, Rifalk stood tall and turned away all the shots he faced in the frame. Rögle managed seven shots of their own in the frame but they were also turned aside. The goaltender battle in Ängleholm would end 1-0 in favour of Rögle as they grabbed an important three point win.

It was two games in two days for these two teams as they were back on the ice Tuesday night, once again in Ängelholm. This one would be a bit higher scoring, but still a good game from both sides. Rögle was also looking for their first nine point win streak of the season

Coming off their loss the previous night, Timrå was looking to get things started early in this one and that's exactly what they did. Jens Lööke opened the scoring with just over three and a half minutes elapsed in the first frame. Despite being outshot in the period, they would end the first with another goal, this time coming shorthanded from Jeremy Boyce-Rotevall, sending the game to the second period with Timrå on top 2-0.

The second period would see a reversal of fortune for Timrå as they heavily outshot Rögle, but would give up a pair of goals in the frame. Leon Bristedt would continue to deliver, scoring Rögles opening goal and made it his third straight game with a goal. Anton Bengtsson would tie the game with just 21 seconds remaining in the period. Despite Timrå outshooting their opponents 12-6, the game would head to the final frame of regulation all tied at two gaols a piece.

The third period was a wild one with plenty of chances and lots of scoring. Rögle would open the frames scoring with a pair of lightning fast goals courtesy Ted Brithén who managed to score the two goals in a span of just 22 seconds. Undaunted, however, Timrå battled back and scored their second shorthanded goal of the game, this time coming from Per Svensson. Despite their best efforts that's as close as they would come as Leon Bristedt would score an empty netter in the final seconds of the game to secure the victory.

With two goals and three assists, Bristedt registered his first career five point game in this one and Rögle won three three point games in a row for the first time this season. After the weeks action wrapped up yesterday Rögle now sit second overall with 70 points, four back of league leaders Skellefteå. 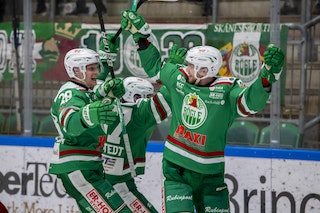 Djurgården continues to bolster their roster and this week they added a big piece to their back end, recruiting Éric Gélinas from Rögle. Gélinas started the season hoping to make the roster of the Carolina Hurricanes, but after beeing sent down to their AHL affiliate he decided to return to Rögle. However, he was not given as big of a role as he had last season and so decided to part ways with the team.

– It feels very safe to bring Éric here, a defender who adds a lot in both the defensive and offensive sides of the game. In recent years, Éric has been one of the league's absolute best defenders. Of course, it feels great to reach this solution at this stage of the season, says Djurgården's acting. sports director KG Stoppel

Gélinas SHL resume has been impressive as he has scored 58 points in 102 SHL appearences (15G 43A). His contract is valid through the end of the season.

The Växjö Lakers also added a new face to their blue line this season as they have signed 25 year old Ben Thomas. Last season Thomas had a brief appearence with the Tampa Bay Lightning and also had a few games with their AHL affiliate. He came over to Leksand at the start of this season, but was looking for a new opportunity.

– We've taken Ben Thomas from Leksand. Ben and Leksand have not really gotten it right, so this was a good solution for everyone. Ben is a typical two-way back who normally plays all aspects of the game. He will be very useful for us, says Lakers sports manager Henrik Evertsson.

Thomas had just two goals and one assist in 32 games played with Leksand this season.

Oskarshamn and Dale Weise have decided to part ways after a bumpy first season for Weise in the SHL. He started the season with a lower body injury in his first period of action and was sidelined for a number of weeks while he recovered. After that he struggled to produce for the team, scoring just three points in 17 games.

– I and IK Oskarshamn want to thank Dale for the time with us. We both feel that we have not really reached the point where we wanted to reach and have decided to break the contract. I appreciate the mentality and level of professionalism that Dale has contributed during his time with us and wish him luck in the future, says Oskarshamn's sports director Thomas Fröberg. 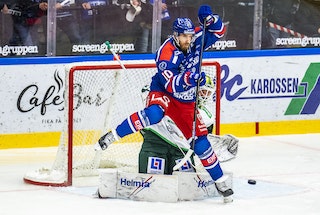 Skellefteå will be keeping their veteran goaltender Gustaf Lindvall as they have signed him to a new contract.

– It feels very fun to secure Gustaf. It gives us security over time in an important position. His performance on the ice and his way of wanting to get better every day helps our team and will be able to help us compete for the Swedish Championship gold in the next few years, says Skellefteå's GM Erik Forssell.

This is Lindvalls sixth straight season with the club. In 20 appearences so far this year Lindvall has posted a 2.00 GAA and a .922 SV%. The new contract will see Lindvall remain with the team until the conclusion of the 25/26 season.

Kristaps Zile is Örebro's newest defensive recruit. The 24-year-old comes from Dinamo Riga, where he has scored nine points in 32 games this season. Ziles has a total of 229 appearances in the KHL. He is currently playing in the Olympics with Latvia, but will join Örebro after the tournament.

– We get a defensively strong defender who plays with a big heart and who will make our team stronger, says Örebro's sports manager Niklas Johansson

The contract is valid for the rest of this season.

Färjestad fans were delighted this week to hear that Theodore Lennström will be returning to their blue line for the rest fo the season. The 27 year old played two seasons with Färjestad between 2017-2019.

– We are happy to welcome Theodor back to Färjestad BK. We know that he enjoyed himself very much with us when he played here, and we hope that it will be the same now. It is a very competent defender who comes to us and we believe that Lennström will be able to help the team in a very nice way, says Färjestad's sports director Rickard Wallin.

Lennström has spent this season in the KHL playing with Torpedo Nizhny Novgorod where he scored 9 goals and 18 assists in 40 games played. He is currently representing Sweden at the Olympics and will join the team after the games have concluded.

The contract is valid for the remainder of the season. 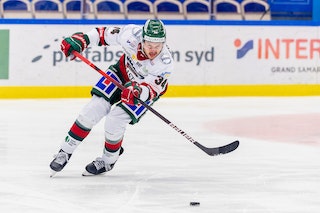 Greg Scott and Brynäas have agreed to a new deal this week. The 33 year old Canadian is in his sixth season with Brynäs and spent three seasons in the KHL.

– Greg is really a person and player that we want in Brynäs. He is useful in all forms of play, always puts the team before himself and is a much appreciated teammate and person, says Brynäs sports manager Johan Alcén

The new contract is valid for an additional two seasons.

Jesper Kandergård and Patrik Norén have signed new contracts with Leksand this week.

Jesper Kandergård came to Lesakand in 2017 and made his debut with the clubs big team the in 2019/20. He appeared in 42 SHL games last season and 21 so far this season. His new contract with Leksand is valid until 2023.

– I think I have had a nice development curve in recent years in the association and look forward to developing further with the team, says Kandergård.

Patrik Norén is in his third season in Leksand. He returned to the club last year after playing a pair of seasons in Skellefteå. The 29-year-old has been assistant captain for the past two seasons and this season he is averaging almost 19 minutes per game.

– Somehow I have always longed for home and wanted to play for Leksand again, and that we now have a longer contract for three years feels great to me. The future looks really interesting, says Norén, who has signed a contract until 2025.