When star goalie Joel Lassinantti left Luleå prior to this season, the team didn't have to look far to find his replacement. For starters, they already had veteran David Rautio. And in their junior ranks, they had one of the top ranked goalies in the world. Meet Jesper Wallstedt.

In what pretty much was a stealthy climb to the top, Luleå Hockey are now a powerhouse in the SHL. With a solid system, focused on a compact defensive game with strong breakouts and pinpoint passing, Luleå are now a force to be reckoned with. And they seem to have picked up where they left their game this past spring. With 19 points in eight games, Luleå are still undefeated in regulation and they have only lost one game (3-2 shootout loss to Djurgården).

"We've been playing okay. We've come away with points without playing our best game and that is a strength in itself." goalie Jesper Wallstedt says.

With a small player turnover in the offseason, the core of the team is intact and the group chemistry has not changed a bit.

In the summer, Wallstedt replaced longterm star goalie Joel Lassinantti, who moved to the KHL. Together with veteran David Rautio, Wallstedt has some big shoes to fill. And to be fair, they have.

"The pressure on me and David to fill that void is 'Lassi' left and that makes you push yourself further." he says.

The 17 year-old is in his first full season as an SHL player having taken the spot of Lassinantti in the summer. Using his big body - he is 191 centimeters tall, weighing 97 kilos which translates to 6'3", 214 lbs - he hasn't changed much in his game, although there was a bit of a learning curve coming into the SHL full time.

"In the beginnig, I found it tough with all the practice. First fitness practice and then two hours on the ice. Other than that, I just had to adapt to the speed of the game. The shots are harder and they come faster." he says.

Did you have to adapt your stance or the way you take away the shooters´ angles?

"No, not really. I adapted pretty quick, which has helped me being able to continue honing the details of my game."

What stands out in the league, would you say?

"It's a very strategic style of play. There is a defensive style of play and more strategy to how to play. But I enjoy it very much, it's fun being here playing. I try to keep to my game, that's what brought me here. For me, it has been about adapting to the speed. My focus is endurance, to be switched on during a whole practice or game." 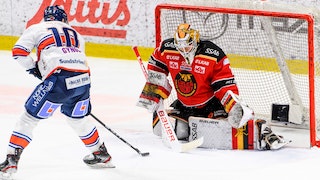 Wallstedt stopped 20 out of 21 shots in his season debut against Växjö Photo credits: Simon Eliasson / BILDBYRÅN

The Wallstedt family is of goaltender pedigree. Both his father Jonas and big brother Jacob were goalies. And eventhough Jesper Wallstedt combined his goaltending with playing D up until the age of twelve, he doesn't look back on the decision to become a goalie fulltime.

"If it had been dobale, I would've loved to continue playing D as well. I liked the defensive game, but it was hard to skate that much!" he laughs.

Wallstedt is from Västerås, a mid-Sweden town known for players such as Nicklas Lidström, who by the way lives down the street from Wallstedts family home. Up until he was 16, he played for his hometown team and made his U20 debut, beating a record set by Tampa Bay Lightning defenseman Victor Hedman. Wallstedt made his debut at the age of 14 years, ten months and one day, beating Hedman by four days.

And during that season he also did something not every goalie does. He scored a goal.

"We played Brynäs and were up by 3-2 or something. I got the puck and sent it down the ice. It went in. That was pretty fun." he explains, in a calm collected voice.

Since 2018, Wallstedt resides in Luleå where he attends high school with a hockey profile to his education, meaning the studies and hockey is combined under the Luleå Hockey umbrella. And the choice of Luleå was specific for a number of reasons.

"One of the most important things for us when we were looking for a hockey high school was that the club we'd go to would have two fulltime goalie coaches, and Luleå does with Gusten [Törnqvist] and Linda [Blomqvist]. That would ensure me getting the best possible outlook in practice both as a junior player and if I were to make it to the first team."

He did. The 17 year-old made his SHL debut in the last game of the season this past spring and has now played three games in the SHL so far. Just before summer training, he got the call from general manager Stefan Nilsson, letting him know that he'll be playing the SHL in the coming season. 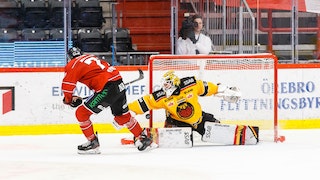 "I got the call just before summer and that was a relief knowing I'd be staying with the team." Wallstedt says.

Looking a bit further down the road, Wallstedt is one of the top ranked prospects heading into the NHL Entry Draft in 2021. But that is then, what's now is now.

"Haha! Of course it is a dream to move to the NHL some day, but I haven't really gotten into that whole draft process yet. We'll see what happens down the road. But for now, I try to lay low."

If a .945 save percentage is laying low, then so be it. But Jesper Wallstedt is making headlines already.

And being 17 years old, he has only begun.

Music Genre: "I've got no favorite genre, I listen to most music."

NHL Team: "I've always been following Henrik Lundqvist, so I guess the Rangers..."