This past week saw some great hockey action with Rogle leading the way, grabbing six points in the process. Jesper Frodén continued his hot streak and Linkoping are now in a world of trouble after yet another week without a regulation win.

Another week in the books and with that, Rogle are topping the league with 15 points in six games. The Angelholm based team grabbed two more wins this past week, beating Oskarshamn 3-2 Thursday before taking down the high scoring Orebro 3-1 on Saturday with Leon Bristedt and Daniel Zaar each tallying a goal and a helper in the latter game. Bristedt is one of seven players who scored three points in two games last week. 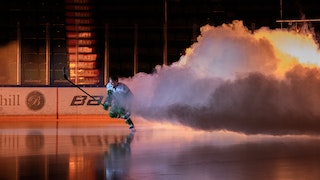 For Orebro, the week brought the team back down to earth. After beginning their campaign with four straight wins, Orebro suffered two straight losses. Prior to the Rogle loss, Orebro lost to Malmo (2-1) on Thursday.

Frolunda beat Brynas 3-0 Thursday, with Niklas Rubin posting his third shutout in four games played – the team has five games played in total. Only three goalies have posted a shutout so far in the season. Other than Rubin, Erik Kallgren of Vaxjo and Niklas Svedberg of Djurgarden each has a shutout.

Besides Rogle, both Farjestad and Skelleftea grabbed two wins last week. Farjestad won a high-scoring, intense affair against Linkoping Thursday where they first went up 3-0 in the first ten minutes before blowing that lead. They then scored twice before Linkoping could polish the nunbers a bit, making it 5-4. Farjestad then went on to beat HV71 Saturday (3-2 in OT). Skelleftea beat HV71 4-2 on Thursday before coming away with a 3-1 win in Vaxjo on Saturday. Jesper Frodén had one goal and two assists in those games, thereby extending his point streak to four straight games (5-2--7). Skelleftea play Frolunda on Monday night. 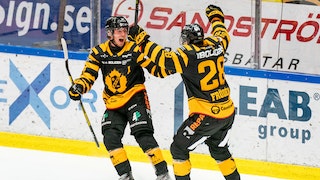 Orebro, HV71, Lulea and Linkoping all lost both their games with Orebro and Linkoping being the only teams not grabbing a point during the week. For Linkoping, that means they now have played six games without getting a regulation win. With three points, they are now in last place, one point behind HV71 with a game in hand.

Malmo Redhawks only played the one game against Orebro and they are the only team with four games played. Djurgarden and Frolunda have five games played, HV71 and Farjestad each have played seven. All other teams have played six games so far.

Getting back to the players, Martin Johansson (Farjestad), Broc Little (Linkoping) and Linus Sandin all had two goals and one assist during the week. But four more players had three points; Leon Bristedt (Rogle, 1-2--3), Patrik Lundh (Linkoping, 1-2--3), Jesper Frodén (Skelleftea, 1-2--3) and Fredrik Olofsson (Oskarshamn, 0-3--3).

In terms of a season perspective, not much has changed when it comes to top scorers. Marek Hrivik of Leksand is still leading the charge with 12 points (3-9--12). He is the only one with 10+ points. Borna Rendulic (5-4--9) of Orebro is still in second place, tied with Broc Little (5-4--9) of Linkoping. Carter Camper and Peter Cehlarik, both with Leksand, is in fourth place with four goals and five assists, being edged from second in terms of goals scored. Jaedon Descheneau (Brynas) and Jonatan Berggren (Skelleftea) both have two goals and seven assists, tied for sixth.

This coming week offers hockey Monday, with the aforementioned Frolunda vs Skelleftea game. We then get two full seven game slates both Thursday and Saturday.