With the regular season winding down and the playoffs looming, the race at the bottom of the standings is heating up as five teams compete for a playoff spot and also attempt to stay out of the bottom two. Coming into the week, Linköping sat just outside a playoff berth in 11th and were hoping to remedy that with a trio of games this week.

The game was fairly evenly matched throughout the full sixty minutes, both on the shot clock and the score sheet and both goaltenders put forth a great effort between the pipes. It was Henrik Törnqvist, however, who would give Linköping the lead in the first period to put them up by one. That would be the only goal scored in the first two frames of the game as neither goalie would let another one past until the third period.

Coming into the game Linköping forward Broc Little had not scored in nine straight games, he had not even claimed a single point in the stretch, in fact. However, that changed at the 6:16 mark of the third period after he was able to bang home a rebound on the doorstep to give Linköping the two goal lead. Timrå would answer right back just a couple minutes later in the late stages of a powerplay as Sebastian Hartmann would send home his own rebound on a breakaway. Unfortunately for Timrå, that was all the offence they would muster as Linköping secured a huge three point victory.

The first period was a wild back and forth from the two teams as they went goal for goal throughout the period. Despite the fact that Linköping was outshot 13-5 in the first frame, they managed to keep pace with Färjestad on the score sheet as both teams scored a pair of goals in the opening twenty minutes, three of which came in the span of just over three minutes.

Despite the wild ´first period and multitude of goals in the opening twenty minutes, the second frame was much less eventful. Both teams managed a few shots on target, but no one was able to break the deadlock heading into the final frame of regulation.

The third period was a nail biter for Linköping after Färjestad regained the lead in the early stages of the frame. The game came right down to the wire as Henrik Törnqvist, with the net empty, on the powerplay and just 26 seconds remaining, was able to tie the game and force the overtime frame.

After going on a nine game goal drought, as previously mentioned, Broc Little made it two games in a row as he scored a goal of the year candidate with a between the legs beauty to win it in overtime and give Linköping the extra point. The win also bppsted them past Brynäs and into the tenth and final playoff spot. 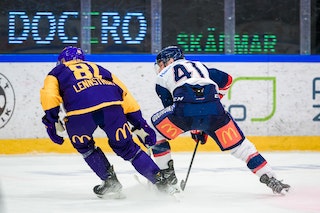 There was little time for rest for Linköping as they were back at home on Sunday evening hosting the Malmö Redhawks. Just like the game against Timrå, this was an important game for Linköping as the Redhawks sat just six points back of them in the standings.

Unfortunately for Linköping this game would not yield the result they were hoping for as Malmö took the lead in the first period and never gave it back. Linköping managed to muster a pair of goals, one in the second and one in the third, but the Redhawks proved to much for them. A pair of goals from Malmö late in the third period would be the nail in the coffin as Linköping would lose 5-2, ending the week on a sour note.

With the loss, and a Brynäs win on Sunday evening, Linköping fell back out of the top ten and now sit just a single point back of Brynäs and just three points ahead of Malmö. Linköping meet Malmö once again on Thursday this week, in what could prove to be one of the most important games of the season for both teams.

Sticking with Linköping, the first news bit of the week concerns a coach, rather than a player. Klas Östman has been rewarded with a new contract with Linköping.

– Klas is a much appreciated coach and leader of everyone in the organization. We are very pleased that we have already agreed on an extension over the next three years. During his first year as head coach, Klas has shown that he is a competent leader and coach. We look forward to continuing our collaboration, says LHC's GM Niklas Persson

The new deal will see Östman remain behind the bench in Linköping until the end of the 2024/25 season.

Despite the fact that Anton Bengtsson was already signed with Rögle until the end of next season, the team from Ängelhom decided to lock him up for an even longer period of time. After starting his professional career with a long tenure with HV71, Bengtsson came over to Rögle in the 2019/20 season and has steadily improved during his time with Rögle. This season has seen him score 17 goals and add 19 assists for a career high 36 points.

– Anton embodies everything we want with our players here in Rögle. He is a fantastic person, he is an incredible teammate and leader and he plays with a frenzy and competitive spirit that is difficult to match. I am very happy and proud that he will continue to play for Rögle for a couple of years to come, says Rögle's sports director Chris Abbott.

The new deal will see Bengtsson remain with Rögle until at least the 2024/25 season. 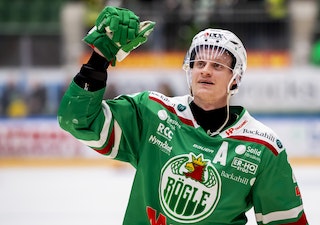 The young Elias Pettersson has had an appearence in 16 games with Örebro this season and has now been rewarded with a big team contract.

– He is a promising defender with strong skating and a good sense of play. It will be very exciting to follow Elias' journey in Örebro Hockey, says Örebro's sports manager Niklas Johansson

Petersson has been locked up by the club until the end of the 2024/25 season.

Janis Kalnins made his SHL debut this season with the Växjö Lakers. Unfortunately for him it was not as successful as he or the team would have hoped. In 17 appearences this season Kalnins posted a 2.84 GAA, an .887 SV% and posted a single shutout. Kalnins and the Lakers agreed to part ways this week and Kalnins was quickly picked up by Tappara in the Finnish League.

Some team related news this week as the CHL tournament wrapped up and an SHL team was once again victorious. Rögle defeated Finnish squad Tappara after a pair of goals from Daniel Zaar propelled them to a 2-1 victory, claiming their first CHL title. Rögle becomes the third SHL team to win the CHL behind Frölunda and Luleå. 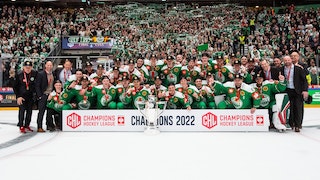