With the past week behind us, we take a look at player and personnel moves within the league. This weeks highlights include a player returning to HV71 and new NHL contracts.

HV71 continues to add key components to their lineup in anticipation of their return to the SHL after one year of relegation play in Hockey Allsvenskan. This week saw them add a familiar face as Mathias Tedenby will be making a much anticipated return to Jönköping this season. The highly decorated left winger has spent the past three seasons with three seperate teams, HC Davos is the Swiss League, Vityaz Podolsk and most recently Dinamo Minsk in the KHL. Tedenby will be entering his 9th season with HV71, the only team he has ever played for in the SHL.

– Fantastic to get back to HV71 which means so much to me. I have missed the wonderful feeling in the club and all the friends I have made over the years in HV71 and look forward to playing in front of the HV audience again. I have many fond memories from my previous years here and now I come home to create new memories, says Mattias Tedenby

Leksand has gone international with their newest recruit as they have signed 26 year old Canadian John Quenneville. The 30th overall pick by the New Jersey Devils in 2014 has made 42 NHL appearences and most recently played in Switzerland with the ZSC Lions where he scored 20 goals and added 17 assists in 46 games. He is also the brother of Oskarshamns David Quenneville.

– We had John on our radar already before last season. Then nothing happened but it is all the more fun that we have now managed to get John to Leksand. In John we get a player who loves to shoot and who has a very good shot. He enters the areas required to be an offensive threat. He is a good skater, is aggressive and we like his ambition to develop in our environment to get a new chance in the NHL in the future, says Leksand's GM Thomas Johansson 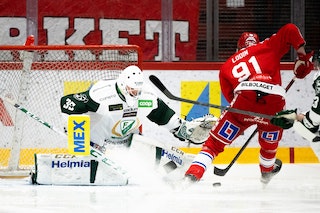 Marco Kasper was the highest SHL pick in the draft, going 8th overall to the Detroit Red Wings. The Austrian center has signed a three year ELC with the Red Wings.

Elias Salomonsson has also signed a three-year ELC with the Winnipeg Jets. They drafted him 55th overall in this summers entry draft

The fourth and final SHL player to sign an NHL contract this week is Ludwig Persson. The forward made ten SHL appearances with Frölunda last season and has also signed a three eyar ELC with the Washington Capitals who drafted him 85th overall.

As some new young careers get started one has also ended this week as Viktor Ekbom has announced his retirment from professional hockey. His last four seasons were spent with Frölunda, where he won a championship with them in 2019. But he also spent time with Linköping and was the Captain of Örebro during his 502 game career in the SHL.

– An incredibly popular guy by players and leaders, who always sacrificed and gave everything for the club, says Frölunda's sports manager Fredrik Sjöström