With all the talent in the league, it comes as no surprise that a number of players are being signed to the big league in North America every summer. This week saw 7 SHLers sign contracts with a number of NHL teams. Timrå has also made key acquisitions in preparation for their new season in Swedens top league.

First and foremost, and perhaps the least surprising, is the signing of Nils Lundkvist with the New York Rangers. The 20 year old has been a mainstay on Luleås blue line for the past three seasons and has shown massive improvement in his game over that span. Drafted 28th overall by the Rangers back in 2018, Lundkvist is finally getting his shot at the big league and will be looking to step into a team that has a history of Swedish talent.

Viktor Lodin, drafted 94th overall in 2019, will be hoping to make the big squad with the Ottawa Senators this coming season. The 22 year old put up an impressive 40 points in 47 games played this season with Timrå in HockeyAllsvenskan and is hoping that translates well to the NHL.

Mattias Norlinder might need to brush up on his french as he is set to join the Montréal Canadiens for the upcoming NHL season. The 21 year old was drafted 64th overall by the Habs in 2019. He turned heads with a great performance in the post season with Frölunda this year, scoring 3 goals and 2 assists in 7 games played.

As a 21 year old playing in just his second SHL season between the pipes Samuel Ersson was extremely impressive this season, despite playing with a struggling Brynäs squad. With a whopping 42 games played this season he posted 2.96 GAA and a .911 SV%. He has now signed with the Philadelphia Flyers, who drafted him 143rd overall back in 2018. As a young goaltender it is unlikely he will see NHL action in the coming season, but he certainly has a bright future ahead of himself.

The SHL will be saying goodbye, at least for now, to one of its speedier players as Andreas Wingerli has signed with the Colorado Avalanche. Wingerli has been with Skellefteå throughout his entire professional and most of his junior career where he has posted consistent offensive numbers. His speed and agility could potentially be better suited to the smaller ice surface in the NHL.

The young superstar for the Växjö Lakers this season, Pontus Holmberg, will be getting his shot at the NHL as he has signed with the Toronto Maple Leafs, who drafted him 156th overall in 2018. The 22 year old won the Stefan Liv Memorial trophy as the most valuable player in the post season.

The seventh and final SHL player announced to be heading to North America this week is Helge Grans. The 19 year old played this past season with the Malmö Redhawks and will be playing with the LA Kings AHL affiliate the Ontario Reign. Grans was drafted 35th overall by LA in this past draft.

It's no secret that winning your way into the SHL is a monumental task, however, being able to play at a high enough level to stay in the big league is perhaps even more challenging. Since being relegated in the 2012/13 season, Timrå has managed to work their way back to the SHL just once, in 2018/19. However, they were unable to keep their spot in the big league. They now have their second opportunity and are recruiting furiously to try and put together a competitive SHL team. 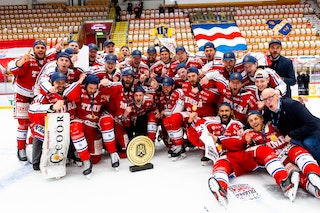 This past week saw them pull in three names that will be recognizable to any SHL fan. Robin Alvarez joins his fifth SHL team as he has previously played with Djurgården, Malmö, Skellefteå and most recently Frölunda. Alvarez will provide some physicality to the Timrå roster and also has the ability to contribute offensive numbers. Erik Andersson will be joining Timrå for the upcoming season after spending the last three seasons with Rögle. Although his offensive numbers aren't the best he has shown steady improvement offensively over the past few seasons in Rögle. Timrå will be hoping the 26 year old will continue to improve with their club. The third forward Timrå has added is Viktor Liljegren who will be making his SHL debut this season. He has spent the past three seasons putting up consistent offensive numbers in HockeyAllsvenskan and will be looking to continue that success in the SHL. He also adds size to the Timrå roster as the 27 year old stands 191cm/6'3" and weighs 94kg/207lbs. The final addition Timrå made this week is on the back end as they have signed Didrik Strömberg. The 27 year old will be returning to his former club as Strömberg was apart of the organization from 2012/13 - 2017/18, playing in with their J20 team as well as on the main team in HockeyAllsvenskan.

Örebro will be losing a key piece of their offence as Borna Rendulic will be returning to his former team Adler Mannheim in the DEL. His one and only season in the SHL this past year saw him put up 38 points in 49 games played. His departure will leave a hole in Örebros offence.

Taylor Matson has signed with HV71 in HockeyAllsvenskan. The 32 year old had a less than stellar season with Rögle, registering just 9 points in 50 games played this past year. He will be hoping to help HV71 get back into the SHL.

Jacob De Le Rose will be joining Färjestad. The 26 year old has spent the last 7 seasons in North America playing with Montréal and their AHL affiliate, as well as the Detroit Red Wings and St. Louis Blues.

Michael Haga will be leaving Sweden for the first time in almost a decade. The 29 year old Norwegian is set to join Lukko in the Finnish League this upcoming season.

Leksand has signed Finnish goaltender Kasimir Kaskisuo. The 27 year old has spent the last six years playing in the AHL and ECHL. Most notably with the Maple Leafs AHL affiliate Toronto Marlies. This past season, however, he played in just one game all year long, which was a short appearence in which he only faced 3 shots. He'll be hoping to shake off the rust and put forth and good performace between the pipes in his debut season in the SHL.

The final big signing of the week welcomes a new North American to the league. Justin Kloos spent the past season with Torpedo Nizhny Novgorod of the KHL, his first season in Europe. Previous to that he spent a number of seasons in the AHL with the Iowa Wild and Sand Diego gulls. This past season he put up 11 goals and 9 assists in 48 games played. He also joins Leksand for the upcoming season.