The Champions Hockey League has begun and the SHL representatives continue to impress at the start of the tournament.

The Champions Hockey League kicked off this weekend with the Swedish teams displaying their dominance.

Rögle had a pair of victories as they kicked off their debut in the CHL with a 5-3 victory over EV Zug. They also had a thrilling victory in Angelholm over Red Bull Munich as a pair of goals in the final 20 seconds of the game edged them past the german squad. Adam Tambellini scored the game winner on a penalty shot with just 6 seconds remaining in the game. The young Marco Kasper was also impressive for the home side as the 17 year old scored a pair of goals and added one assist. Rögles victory now puts them two for two in their debut CHL season.

Reigning CHL champs Frölunda also got off on the right foot as their openener against BK Mlada Boleslav resulted in a 4-1 victory, aided by a three goal first period. They then faced off against Swiss team ZSC Lions in Zurich. The big story of the game was Frölundas inability to stay out of the penalty box as they racked up a total of 35 penalty minutes resulting in 5 powerplay opportunities for the Lions. The powerplay opportunities and lop sided shot total (32-19) proved too much for Frölunda as Zurich came away with the 4-2 win, aided by a three goal third period.

It was a bit of a different story for Växjö as they came away with the 2-1 victory over Sparta Prague and then the Lakers hosted the Fischtown Pinguins of Bremerhaven. The Lakers came out hard in the first and never backed off. A trio of goals in the first period gave them a comfortable lead and they would add another pair before the final buzzer sounded. Richard Gynge scored a hat trick and Adam Åhman registered the shutout in his CHL debut. The dominance of the defending Swedish champs was also evident on the shot clock, as they outshot the german side 44-20.

Skellefteå was the only Swedish team to lose in their first game as they fell 5-1 to HC Lugano. However, they would turn it around as they visited Eisbaren Berlin, looking for their first victory of the tournament. The Swedish side would come away with an impressive come from behind victory, aided by a three goal third period. Rickard Hugg scored a pair of goals for Skellefteå, including an empty netter late in the third to seal the victory.

Just like Rögle, Leksand also made their CHL debut this week and came away with a pair of wins. The first game saw them come away with a big 5-3 victory over Slovan Bratislava. Their second game of the week had them hosting Czech squad Oceláři Třinec. Despite a quick goal just 17 seconds into the first frame by the visitors, Leksand was undaunted and came out hard in the second. Registering 22 shots in the second frame and scoring a pair put them in the drivers seat. The Czech side would tie it up in the third, but a late goal from Oskar Lang secured the 3-2 victory. 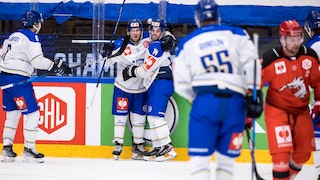 Pre season action also continued this week with a number of warm up games being played.

SHL teams showed their dominance over HockeyAllsvenskan teams in this years Scaniarinken Skoda pre season tournament. Djurgården beat Södertälje and Vasterås 3-0 and 4-3 respectively. Linköping also handed Södertälje a 3-0 loss. Brynäs defeated Västerås 4-1 and Malmö was the only SHL team who failed to register a win this week against an HockeyAllsvenskan team. The Redhawks lost 4-1 and 4-2 against Västerås and Södertälje respectively.

There was only a pair of moves to report this week, both concerning Canadians, one coming and one going.

JC Lipon has signed with HK Sochi in the KHL. The 28 year old spent just 8 games with Oskarshamn this season after coming over from Dinamo Riga. It was reported last week that Lipon would be heading to Germany to play with the Straubing Tigers, however that report proved to be innacurate.

The only other move of the week concerned Leksand as they have recruited Ben Thomas from the Syracuse Crunch. The 25 year old played 5 games with the Tampa Bay Lightning this past season but has spent the last 5 season with Syracuse in the AHL.