The defending Swedish Champions have not had the start to the season they were expecting. Coming into the week the Växjö Lakers sat outside of the top six, but were coming in with a two game win streak and had a chance to push into a quarterfinal spot. This weeks pair of matchups were a home and home against league worst Djurgården and the Lakers were hoping to come away with a full six points.

Thursday nights matchup took place in Stockholm as Djurgården returned home after an unsuccessful two game road trip that saw them lose to both Brynäs and Oskarshamn. This was also just the second matchup of the season between these two teams as Växjö came away with a 4-2 victory in their first matchup of the season back on October 2nd.

The first period saw a good start from Djurgården as they outshot the Lakers 12-6 and took the lead just over 12 minutes into the frame as Ludvig Rens´feldt found the back of the net on the powerplay,

The second frame saw Djurgården continue to put shots on net, tallying another 12 in the frame. Unfortunately for them Adam Åhman turned aside all the shots he faced, giving the Lakers and opportunity to tie the game, which is excatly what they did. Glenn Gustafsson made a good rush along the left side and finished it off with a wrist shot that beat Mantas Armalis far side to tie the game at one heading into the final frame of regulation.

Unlike the first two frames, Djurgården was heavily outshot in the third. However, they managed to regain the lead with just under five minutes elapsed as Rensfeldt scored his second of the game. The Lakers managed 13 shots in the frame but it looked as though Djurgården would hold on for the victory. Unfortunately for them a late penalty gave the Lakers the opportunity they needed and Tobias Redier would score on the powerplay with just 1:21 remaining in the frame, forcing overtime.

The overtime frame would not see a deciding goal, so a shootout was needed. There would be just one goal scored in the shootout and it came from Glenn Gustafsson who beat Armalis with a wrist shot to give the Lakers the win and the extra point.

The second game of the home and home would take place on Saturday evening in Växjö as the Lakers were looking for the series sweep infront of the hometown crowd. Unlike the previous game, Djurgården struggled to hold the Lakers offense at bay in this game as the home team outshot Djurgården 38 to 18.

The first period, despite numerous chance for the Lakers, would end in a scoreless tie. It wouldn't take long, however, for the Lakers to break the deadlock early in the second frame. The hero of the previous game, Glenn Gustafsson, woukld open the scoring with less than four minutes elapsed in the period. Pontus Holmberg would then extend the lead to two on the powerplay just a bit later and the Lakers would carry the 2-0 lead into the final frame.

Despite trialing by two, Djugården could not muster much in the ways of offense in the third and were outshot 17-3 in the final frame. Despite the numerous shots and chances for Växjö, just one managed to find the back of the net. However, that would be more than enough as Djurgårdens trio of shots did not manage to get past Adam Åhman as he would register his first shutout of the season and just the second shutout of his SHL career.

With the 5 points this week the Lakers now sit 6th overall with 45 points. 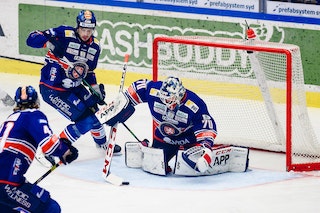 Timrå strengthened their roster this week with the addition of Pontus Åberg. Åbergs most recent SHL team was Färjestad back in 2013/14, he also has experience with Djurgården. He has spent the last 8 seasons in North America and one season in Russia. He played for Nashville, Edmonton, Minnesota and Toronto in the NHL and their AHL affiliates. He also spent one season with Traktor Chelyabinsk.

– It will be fun to come home to Sweden after many years in both the USA and Canada. I am really looking forward to coming back to Swedish hockey and the SHL and hope to be able to contribute in a positive way both on and off the ice. I have recently had a very positive dialogue with "Nubben" (Kent Norberg, Timrås sports manager) and in addition I have heard only good things about the organization, says Åberg.

– I have put a lot of time and work into coming back, so it feels very difficult that these problems have returned. Therefore, I have chosen to take a break from my career in this situation and will not play more this season due to the injury, says Bäckman. 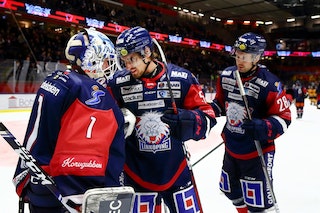 Jaedon Descheneau and the Malmö Redhawks have parted ways. After just 10 games played this season Descheneau leaves Malmö and the league. It didn't take long for him to find a new team, however, as TPS in Finland has signed him to a new contract.

Nikola Pasic has also announced his departure from Linköping and the SHL. His 13 games played and no points this season with Linköpng were not what he was hoping for. He has joined Södertälje in HockeyAllsvenskan.

The third and final player to depart the SHL this week is Radek Muzik.