In Sweden, it is not that uncommon for players to go through the ranks of the team in their heart and make the first team debut, even in the SHL. Not every player, however, has the development of Joel Nyström.

The sun shines over Karlstad on a beautiful Wednesday afternoon. It sounds like Joel Nyström is smiling as he picks up his phone.

"We’re having a day off actually. We’re on a bit of a break between games here so we’ve been working hard Monday through Wednesday and today we’re off. I’m on my way downtown for lunch, after that we'll see how the day unfolds," he says happily.

He has his reason to be happy. His Färjestad has been improving in terms of play. And since last season, when injuries and player transaction opened up a spot for him to be promoted from the U20 squad, he is now a regular defenseman, playing for the team he grew up cheering for. And thinking back on his first game with Färjestad in the SHL he just says:

"It was a very powerful, humbling experience. Since day one, it has been my dream to play first team hockey with Färjestad. It’s been amazing."

Despite having played most of his 67 games (61 in the regular season) in front of no crowd or a limited capacity in the arenas, Nyström doesn't really shy away from his wording when asked about playing in front of the hometown fans.

"Those games were massive. It's something else. Having the crowd there gives more feeling to the games. A hit makes them go wild and that powers us."

And with Covid restictions now lifted in Sweden, life as we knew it before March 2020 is coming back. With that, the crowds. With the crowds, the power. With power - the climb for Färjestad?

It has been a bit of a bumpy ride for Färjestad so far in the season. After a rocky start, Nyström says he felt the team click in terms of play, after the first international break back in November.

"Just after the break, we played Örebro after going through a rough period. Since then, I feel we’ve been playing better and better. I feel we’re more consecutive, we have simplified our game and we’re not always trying to make the pretty plays. The greasy goals count, too. Just getting the rebounds, stuff like that. Our simplified game has given us some results. Despite having lost a few now, I feel we are in good form coming into the stretch here." 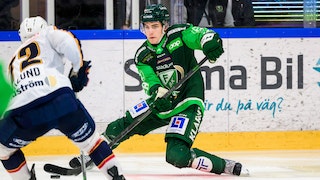 Having completed his high school education in Karlstad, with a hockey profile to his years there, he is now a first team regular, and sure, there was a difference in play coming into the team. But the transition has been pretty seamless. And it helps having teamates that have gone through the same thing recently.

"The whole group is pretty close-knit. But I hang out more with the younger players. Guys like Oskar Lawner, Albert Johansson, Adam Ginning and Anton Berglund, who recently signed his first SHL deal with Färjestad as well. I feel the whole group is very close and I feel at home here. I really do."

Making the jump from junior hockey to playing against men in a professional league can be a daunting task. But Nyström, who has had his ice-time increased from 6:54 minutes per game last season to 16:33 minutes per game, takes it in stride.

"Of course, there’s a difference. The players are bigger, stronger and smarter. But ever since my promotion to the first team, I’ve had great support from my teammates, coaches - everyone, really. There’s a bit of a transition but I feel I’ve adapted more and more to it. I’m pretty satisfied so far," he says before giving his opinion on certain differences in play compared to junior hockey.

"In the league, you have to think a bit faster and sometimes think twice before making a decision on the ice. Since I’m a smaller guy, it was easier for me to kind of box the opponents out when playing junior hockey. Here in the SHL, the players are faster, stronger and smarter so I need to be smart with my stick play to lock the opponent up in a good way. Little things like that. There’s a difference, especially playing in your own zone." the 5'10", 163 lbs right-shot D says.

I'm guessing you pick up one or two things from your teammates, who - if any in particular - do you ask for tips and pointers?

"Everyone talks a lot, all the time. I’ve been playing quite a few games with Mikael Wikstrand, and he’s been helping me out a lot with a few pointers here and there. I’ve also been playing with Mattias Göransson and Ginning. And they help me with stuff as well, since they’ve gone through the transition from junior hockey to first team hockey in recent years."

Nyström has gelled with his surroundings, notching five goals and eight assists in 34 games so far this season - compared to one assist in 27 games last year.

Speaking of recent years, when did he start playing hockey?

"Oh… I must have been about six years old. I had a lot of friends playing hockey and I guess that was what got me playing in the first place. I played other sports as well, like soccer and floorball, but hockey was always number one. I stuck with soccer for quite a while but eventually you reach a point where playing two sports isn’t viable because you miss out on stuff." 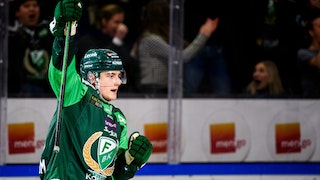 Nyström celebrating one of his five goals so far this season. Photo Credits: Fredrik Karlsson, Bildbyrån

It is not uncommon for players to move positions when playing midget or even junior hockey some times. Joel Nyström had the same upbringing.

"When I was younger I played pretty much everywhere; forward, center. But I felt more comfortable with playing D."

Did you ever play goalie?

Growing up with nine-time champions Färjestad as ones hometown heroes, finding someone to look up to within the organization wasn't exactly hard. But the young D-man was looking up to....a forward.

"I think everyone involved with Färjestad was looking up to Jörgen Jönsson, with everything he did and the way he carried himself. But I don’t have a defenseman with Färjestad that I’ve been looking a bit extra at, no."

How about in general?

"Erik Karlsson, of course. But I guess that goes for pretty much everyone, haha! Other than that I don’t think there’s a defenseman in particular."

It's hard not to find simliarities, both are right-shot defensemen able to carry the puck, skating with an offensive prowess. Karlsson, a bit further in his career than young Nyström, is an NHL mainstay. Does the National Hockey League tickle his brain? He was after all drafted by the Carolina Hurricanes (7th round, 219th overall).

"Of course, I’ve been thinking about stuff like that. But at the same time, my focus here and now is to win the championship with Färjestad. Staying in the present and not get carried away is healthy, I think. We talk from time to time and they give me pointers on stuff I can do better as well as feedback on stuff I do well. " he explains.

One last question, are you supersticious?

"Usually, I go for a pre-game run. But other than that, I don’t have any weird rituals before a game, no," he laughs.

Rituals or no rituals, things are looking up for Joel Nyström.