Despite having gotten off to a rough start at the start of the season, Timrå has really turned things around recently and were looking to keep that momentum going as they hosted second placed Rögle on Tuesday night. Despite being near the bottom of the standings coming into the week, Timrå had actually been the best team over the previous five games, winning four out of five and claiming 12 of a possible 15 points.

The game was fairly evenly matched throughout as both teams would finish with 30 shots on net. However, it was Timrå that would strike first as Ty Rattie would score just over 13 minutes into the first frame to give the hometeam the lead. Not to be outdone, Rögle would respond before the end of the frame and the game would head to the second period all locked at one.

The second period started quickly for Timrå as Sebastian Hartmann was able to restore the lead just over two minutes into the frame. Despite numerous chances from both sides, that would be the only goal of the frame and Timrå would carry the tentative lead into the final frame of regulation.

The third period was fairly quiet for the first 15 minutes or so, but then a flurry of action would result in numerous goals. William Wallinder would score for Rögle to tie the game with less than five minutes remaining, Ty Rattie would pot his second of the game to regain the lead less than two minutes later, and Adam Tambellini would tie the game again with just 13 seconds remaining in the frame to force overtime.

The overtime period did not see a deciding goal and so the shootout was needed. Timrås first shooter, Robin Hanzl, would be the only player to score in the shootout, grabbing an extra point for his team and keeping their hot streak alive.

Thursday would, arguably, be the most important game of the week for Timrå as they were facing off against the Malmö Redhawks, a team they were chasing in the standings. Coming into the game Timrå sat just three points back of the Redhawks and were looking to close that gap with a regulation victory. The Redhawks were also in bad shape coming into the game as they had lost four games in a row, and were hoping to avoid a fifth straight loss.

The first period started off well for Timrå as they struck early. With just over four minutes elapsed Jacob Blomqvist found the back of then net to put them up by one. However Malmö would answer back with a pair of goals in the later half of the frame. Ponthus Westerholm and Lars Bryggman would each score just over two minutes apart to give Malmö the lead heading into the second period.

The seond period was all Timrå on the scoresheet as they struck early and often. It started with a goal from Joey LeLeggia just over thirty seconds into the period. Sebastian Hartmann would extend the lead just over three minutes later and Ty Rattie continued the scoring with just over seven minutes elapsed in the frame. That would be all the scoring in the second period and Timrå was looking strong with a two goal lead heading into the third.

The third period was an absolutely dominant performance from the Redhawks on the shot clock as they hammered Jacob Johansson between the pipes with 17 shots on target. Timrå, on the other hand, managed to muster just three shots of their own in the frame. Luckily for Timrå though, Johansson was able to turn aside all the shots he faced in the third frame and they would hold on for the full three point victory. 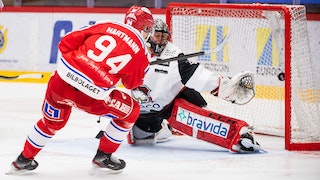 Saturday afternoons contest was the second matchup between Växjö and Timrå, with Växjö having won the first meeting 6-2 back on September 18th.

The first period was a strong performance from the Lakers as they came out hard, firing 15 shots on target in the period. Timrå, on the other hand, managed just six shots in the frame but thanks to another great performance from Jacob Johansson, the game remained scoreless after the first twenty minutes.

The second period was a more evenly matched frame on the shot clock and Timrå was able to to break the deadlock thanks to a goal from Ty Rattie about eight and half minutes into the frame. That would be the only scoring in the period as Timrå would carry the lead into the final period.

It didn't take long for the Lakers to tie the game in the third period as Martin Lundberg broke the goose egg just over two minutes into the period. That would be the last of the scoring until late in the frame. Ty Rattie, with his second of the game, gave Timrå back the lead with less than two minutes remaining. Unfortunately for Timrå and exactly like their game against Rögle, they gave up the game tying goal with just 13 seconds remaining in the frame, forcing the overtime period.

Also like their game against Rögle, 3 on 3 did not yield a game winner and the shootout was needed. The shootout would need an extra round of shooters and Olle Lycksel, with the game on his stick, was able to beat Johansson and give the Lakers the win and the extra point. Despite the loss, Timrå claimed 7 out of a possible 9 points on the week and have claimed points in 6 of their last 7 games.

Färjestad bolstered their blueline this week with the loan of Gustav Berglund from Mora. Berglund was drafted 177th overal by Detroit back in 2019 and spent last season in HockeyAllsvenskan with Västerås.

– We want to broaden our backend, as we have and have had injuries to Jens (Westin) and Jesse (Virtanen), plus we believe and hope that Joel Nyström will play in the junior WC. So we feel that we have a need to find someone who we are able to develop, who's hungry and who wants more, while at the same time can come in unconditionally and challenge in practice and games, says sports director Rickard Wallin.

The loan is valid until further notice.

Brady Ferguson is in his sophomore season in the SHL with Rögle. Last season saw him score 5 goals and add 13 assists in a full 52 games played. This season has seen him score twice and add 11 assists in 24 games played. Rögle has now signed him to an extension that will keep him in Ängelholm until the end of the 2023/24 season.

– Brady has come here and adapted very well to Swedish hockey. He is a very useful center for us and is a very good guy to work with. Everyone in the organization can probably see it. It's great that he can stay for a few years at least. He has a level to reach, especially in the offensive and I really think he will do it, says Rögle's sports director Chris Abbott 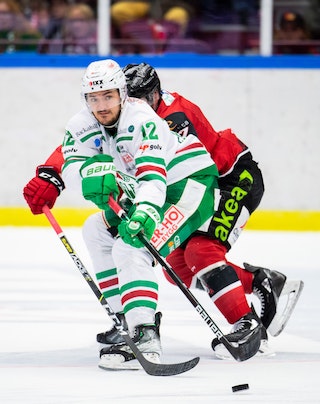 Cannata has been an important part of the Oskarshamn organization for the past season and a half. He played in 44 games last season, posting a 2.79 GAA and a .911 SV%. He has continued to be the main goalie in Oskarshamn this season, playing in 17 games so far. Oskarshamn has inked him to a new extension that will see him stay with the team until at least 2024.

– Joe has developed and taken huge strides since he came to IK Oskarshamn. Although it may not have gone that far in the season, he has already taken big steps with "Sampas" (Mikael Sandberg, goalkeeping coach) help. I am happy that Joe will stay with us for a while longer, says Oskarshamn's sports director Thomas Fröberg.

The only piece of news that involves a player leaving his club this week concern Filip Barklund. The 19 year old was released by Örebro this week after having spent time with the big club over the past two seasons.

– We have not been able to offer Filip the playing time he needs to develop. Right now we have many juniors in our business who are fighting for playing time in the A-team. That is why we have now agreed with Filip to leave the team, says Örebro's sports director Niklas Johansson.

It didn't take loing for Barklund to find a new team, however, as he has signed with Södertälje in HockeyAllsvenskan.