With the past week behind us, we take a look at player and personnel moves within the league. This weeks highlights include a former Brynäs player returning to Gävle and Malmö has found a replacement for Oscar Alsenfelt.

Malmö has been left with a big hole to fill after the departure of Oscar Alsenfelt between the pipes but it appears the Redhawks have found a replacement in 25 year old Adam Werner. Werner has spent the last five seasons bouncing between North America, where he played in the AHL and appeared in two games with the Colorado Avalanch, and Sweden playing in both the SHL and HockeyAllsvenskan.

– He is a tall and modern goalkeeper who has tested the waters on the other side of the Atlantic and in a fairly short time he has gained a great deal of experience. Now he wants to come home and be part of our journey and in him we get a goalkeeper who wants to move forward and push to take the next step, says Malmö's sports director Björn Liljander.

The contrcat is valid through 2024.

Brynäs is happy to welcome back Johannes Kinnvall. The 24 year old defenseman was a standout in he previous two seasons with HV71 scoring 62 points in 83 games. He spent last season in the AHL playing with Calgary's affiliate the Stockton Heat. Kinnvall previously played for the Brynäs junior program as well as the big club between 2015-2017.

– Johannes is basically a whetstone. A humble guy and an esteemed teammate and person. He is a playful defender who, despite his young age, has gained a lot of experience. He is good at finding solutions in the game and is constantly an offensive threat from the blueline, says Brynäs sports manager Johan Alcén. 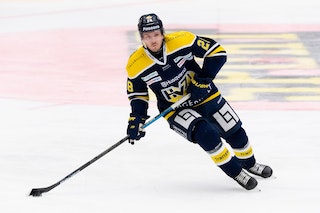 The last acquisition in a quiet week around the league pertains to HV71 and the return of André Petersson, who played for HV71's junior team and big club netween 2006 and 2011. He has spent the past nine season in the KHL playing for a number of teams, most recently Dynamo Moscow.

– André is one of the best Swedish players who played in the KHL and has produced at a high level for a long time. A player who can change a game with his stick handling and offensive power. We are very happy that he chose HV71 for his return to the SHL, says HV71's sports director Kent Norberg.

Petersson has signed a three year contract with the team.