With the top three spots in the standings being a neck and neck race, Skellefteås performance this week kept them in step with Rögle and Frölunda at the top of the pack.

With the league returning to game schedule on the 26th, 12 teams were in action the dy after Christmas as Skellefteå hosted Oskarshamn.

Coming into the game Skellefteå had won 4 of their last 5 and were looking to keep the momentum going. The first period yielded opportunities for both teams, but did not see a goal and the game would head to the first intermission locked at a scoreless tie.

The second period would see Skellefteå blow the game wide open. Linus Karlsson was the first to find the back of the net just a couple minutes into the frame to give Skellefteå the lead. A pair of goals would then be scored in quick succession in the second half of the frame by Jayce Hawryluk and Linus Lindström to give the home team the 3-0 lead heading into the final frame.

The third period would see David Quenneville ripple the mesh for Oskarshamn, but that was all the offence they would muster. A fourth and final goal from Simon Robertsson would seal the deal as Skellefteå came away with the 4-1 victory. With the win, Skellefteå closed to gap between them and Rögle to just one point. They now also sit tied in points, but ahead in the standings, with Frölunda at 54. 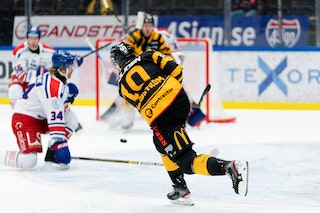 Rögle was a busy team over the past week both with player and staffing news.

Perhaps the biggest news to come out of Ängelholm this week was the news that the Abbott brothers have both received contract extensions this week. Cam Abbott and Chriss Abbott took over mid season in 2017 and have since turned Rögle into a league powerhouse that won the silver medal in last years playoffs and currently lead the league standings. The extension will see the Cam and Chris stay with the team until 2025.

– We strongly believe in continuity and have a lot of work ahead of us to develop the club further. From the club's side, it feels good to extend the contract with Chris and Cam right now. It creates a stability in our sports organization and it means that we can continue to put all our energy in the next few years on developing the club further. Without a doubt, we have a very exciting journey ahead of us as a club, says Rögle's club director Daniel Koch.

Another big extension for Rögle this week was given to Dennis Everberg. The 30 year old forward was already on contract until 2024, but he has now been signed to a five year deal that will see him remain with the club until 2027.

– If you look at the matches, you see how important he is for our team and the way we play. All teams in this league want a Dennis Everberg. Playing as well as he does and agreeing to be here for a long time to come is awesome for the fans, says Rögle's sports director Chris Abbott.

Everberg made his SHL debut back in 2012 with Rögle. He has also played in North America with the Colorado Avalanche and their AHL affiliate. He has also spent time in the KHL and in Switzerland during his career. 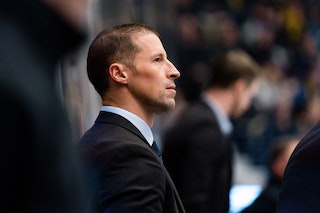 Leksand was also busy this week, inking contract extensions with a trio of young players. 20 year olds Emil Heineman and Nils Åman and 21 year old Alexander Lundqvist have all signed contract extensions. All three made their debuts in 2019.

– A big thing with Emil is his competitivness, both on and off the ice. Emil has a good shot and a great work capacity. Nils is an incredibly skilled and talented center with a fantastic sense of play. He is taking steps in his development every day, and we see an incredible potential in him. Alexander has taken great strides this season and has played very mature for his young age. Alexander is agile on the skates, very flexible, has a good first pass and is position safe, says Leksand's GM Thomas Johansson.

The new deals will see Heineman and Åman stay with the club for the next three seasons and Lundqvist was offered a two year extension.

– Due to the great uncertainty surrounding Carl Lindbom and his possible participation in World Juniors, we felt it necessary to secure the goalkeeper position. Edvin is primarily borrowed for the Christmas week, says Djurgården's acting sports director KG Stoppel.

Rögle had one more announce,ent this week that also concerned goaltending. With Calle Clang at the world juniors tournament, they have borrowed Frederik Dichow from Kristianstad. The loan applied to the match yesterday and the match tomorrow against Leksand. Dichow has a 93.2 save percentage in the HockeyAllsvenskan this season.

Check out this weeks top saves: