Frölundas performance this week has earned them the honour of being the first two time team of the week for our weekly updates this season, and it's for good reason. It's no doubt that Frölunda is currently the team to beat in the SHL and they continued to prove why this week as they grabbed a full nine points in their three games over the past seven days.

Their first game of the week came on the road against Timrå. Despite barely being into November, this was the third of four matchups between the two teams this season, with Frölunda having won both previous games. Frölunda was, of course, the heavy favourite coming into this game and Timrå was looking to avoid extending their losing streak to 11.

Timrå did a good job of shutting down the number of chances they gave to Frölundas high flying offence as they allowed a total of just 16 shots on net for Frölunda over the course of the game and put up an impressive 34 of their own. Despite the large shot differential after the first two periods, Timrå found themselves down by a pair and they struggled to beat Niklas Rubin, who turned aside all 19 shots he faced in the first 40 minutes.

The third period was once again heavily lopsided in the shot category as Timrå hammered the Frölunda keeper with 15 shots in the frame. They were finally able to slip one past Rubin and bring themselves back within one. Unfortunately for them a late goal by Jan Mursak would restore the two goal lead and Frölunda would come away with the 3-1 victory.

Game two of the week for Frölunda saw them welcome the Malmö Redhawks to Scandinvium. They were looking to exact a bit of revenge as Malmö had handed them an overtime loss just 11 days earlier.

This game, just like the previous one, was another massively lopsided game on the shot clock. Although the first period was fairly evenly matched, with the shots being 7-4 in favour of Malmö, the final two periods saw the Redhawks direct a flurry of shots on target.

Despite outshooting Frölunda 34-11 in the final two frames, the Redhawks could, surprisingly, not ripple the mesh. Unfortunately for them they came up against Matt Tomkins, who decided to do his best impression of a brick wall and put on one of the best goaltending performances of the season, keeping the shutout intact until the final buzzer. The only goal of the game came early in the third period as Michael Spacek found the back of the net to give Frölunda the lead and, eventually, the win. With the goal, Spacek extended his point streak to seven straight games. Ryan Lasch also had an assist on the goal which gave him his 17th powerplay point of the season. Tomkins made a total of 41 saves and came away with his second shutout. 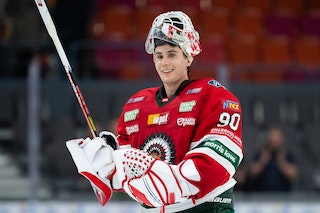 The third and final game of the week was arguably the most important for Frölunda as they came up against Skellefteå, a team that were sitting nine points back of them in the standings.

Just like the previous two games in the week, most of the action in this game occured in the final two periods. Unlike the previous two games however, Frölunda manged to put a decent number of shots on net. Despite a number of good chances for both teams, Frölunda had just a 1-0 lead, courtesy Michael Spacek, heading into the final frame of regulation. Oscar Möller was able to tie the game early in the third frame but it was short lived. Elmer Söderblom restored the lead for Frölunda a few minutes later and Johan Sundström found the empty net with just a second left on the clock to put the nail in the coffin.

With the win Frölunda grabbed a full nine points this week and sit atop the standings with 43 points in just 19 games played. They were also outshot 112-59 but outscored their opponents 7-2, due in no small part to play of Matt Tomkins and Niklas Rubin.

The big news of the week concerns one of the leagues youngest players, Leo Carlsson. At just 16 years of age (2004) Carlsson has signed a full time contract with Örebro. Over the course of the 14 games he has played this season he has surpassed the 100 minute mark and has scored two goals and added a pair of assists.

– A dream that comes true, of course, but right now it feels almost unreal that it went so fast, Carlsson says

The contract runs through until the end of the 2024/25 season.

– Leo has really taken the chance and made a difference since he joined the A-team. Leo has an incredible eye for the game and we are happy to sign a longer contract with him. It will be very interesting to follow Leo's development in our environment, says Örebro's sports director Niklas Johansson. 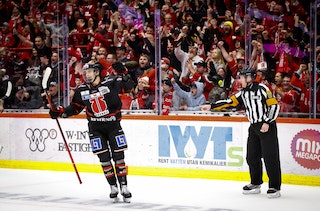 Skellefteå has inked a pair of players to new contracts this week as Albin Sundsvik and Rickard Hugg both signed new deals. Huggs contract will run through until 2024 while Sundsvik is one season shorter.

– Getting ready with these two players means that we are taking a big step with next year's team building. Rickard Hugg is in his third season and has taken a step forward during his time here. He is valuable to us both on and off the ice. Albin Sundsvik has emerged from our junior ranks. He is one of our younger players who drives the group forward every day, says Skellefteå's GM Erik Forssell

More news concerning a young Swedish superstar was announced this week as the San Jose Sharks have allowed William Eklund to return to Djurgården. In nine games played this season with San Jose, Eklund tallied four assists and was a -3. Just as the SHL has a 100 minute mark for junior players to sign big team contracts, the NHL has a 10 game mark for a full season contract. Releasing Eklund to return to Sweden after his ninth game means the Sharks will preserve the first season of his entry level contract and allow him to develop his game further.