Back to Back Wins

This week was a good week for the team from Gothenburg as Frölunda put together two solid performances that resulted in just a single goal against.

Their first matchup of the week on Thursday evening was on the road in Örebro, who has been one of the best home teams so far this season. Before the game on Thursday evening Örebro had claimed 22 points at home in just ten games. However, Frölunda has been one of the best away teams this season and were looking for their fifth straight victory on the road. Unfortunately for Örebro their success on home ice would not translate into success aginst a Frölunda team that was also looking to turn things around after losing three of their previous five games.

It was a stellar performance between the pipes by Lars Johansson who turned aside all 30 shots he faced and claimed his first shutout of the season. The 3-0 win also marked a career milestone for Joel Lundqvist as his assist on the first goal of the game marked his 300th career assist in the SHL. The other two top points leaders in Frölunda, Ryan Lasch and Max Friberg, also each had an assist in the game.

Saturdays matchup was at home for Frölunda as they welcomed a struggling Linköping team who was on the heels of a tough 3-2 loss in the shootout to Rögle on Thursday evening and trying to avoid a three game losing skid. Unfortunately for Linköping they managed to score just a single goal in the third period, which tied the game, but were unable to hold off the Frölunda offence who was able to score another pair in the final frame of the game and come away with the 3-1 victory at home.

With the pair of wins and full six points claimed this week Frölunda now sits third overall in the standings with 35 points in 21 games. Lasch, Friberg and Lundqvist also continue to prove that the veteran core of the team is still going strong as they currently lead the team with 15, 12 and 11 points respectively. Friberg is also tied for the team lead in goals with six tallies on the season. 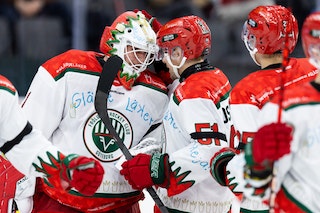 Rögle made a pair of moves this week, the most notable of which was sending Kim Rosdahl back to the Malmö Redhawks. Rosdahl came up through the Malmö organization as a junior player and played four full seasons with the big team, however he departed in 2019. After a bit of a rough start to the season with Rögle they have decided to send him back to his hometown team.

– I am very happy to be back in Malmö again, it is the club in my heart. It's my home and now I'm going to do everything I can to help the team win games. I'm really looking forward to pulling on the red and black jersey tonight, said Rosdahl before his first game back.

Rosdahl spent the previous two seasons playing with Oskarshamn where he put up decent numbers, including a career high 38 points last season.

The second move of the week from Rögle saw them send Theodor Niederbach to MoDo in HockeyAllsvenskan. The 20 year old was drafted 51st overall by the Detroit Redwings in 2020 but has struggled to find his offensive touch this season with Rögle, due in part to his limited ice time.

– It's obviously nice for me. To get to a place that I know inside and out and know that I enjoy off the field. In that way, it feels good to have a fresh start. I also felt that Hockeyallsvenskan is perhaps a better step now and a better opportunity to play a lot. I know MoDo has a team that is in good ownership and doing good things, says Niederbach. 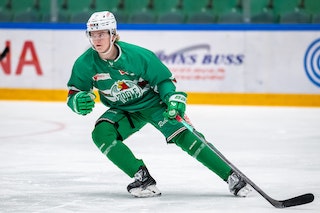 Oskarshamn also made a pair of moves this week as they aqcuired Rasmus Bengtsson from HV71 and sent a player down to HockeyAllsvenskan. Bengtsson has appeared in 12 games so far this season with HV71 but has not managed to produce any offence. The 29 year old defender spent last seaon with Djurgården and before that spent the remainder of his professional career in HockeyAllsvenskan with Rögle, Karlskoga and Tingsryd where he was the captain for a season. The move for HV71 comes after the arrival of Niklas Hjalmarsson, which left them with an overloaded blue line. So to alleviate some of the competitive pressure on the back end Bengtsson has been loaned to Oskarshamn.

Oskarshamns other move this week was to send forward Anthon Eriksson to Västerås on a loan. The 27 year old was in his first season of SHL hockey after playing last season in Poland and previous to that playing in HockeyAllsvenskan and HockeyEttan. Eriksson returns to a Västerås team he had previously spent four seasons with, even helping them get promoted from HockeyEttan in 2018.

– IKO hopes that this will be able to give Anthon more continuous playing time. We wish him all the best at his former club, says a press release from Oskarshamn.

Eriksson appeared in 15 games with the team this season, scoring a single goal.