With just 2 games remaining in the regular season entering this final week, the playoff picture was still uncertain. 1st place was still up for grabs, a couple of teams had opportunities to move in to the top 6 and three teams we're all still in the hunt for the 10th and final playoff spot. It all came down to who was able to perform under the pressure.

Tuesday night featured some very important games. 1st and 2nd placed Luleå and Färjestad went head to head. Luleå had proved over the last month and a half that they were all but unbeatable, however Färjestad was able to snap their lengthy win streak with a 3-0 shutout victory and move in to 1st overall. Malmö hosted Rögle in a game featuring two teams still within striking distance of the top 6, with the hometown team proving victorious. Växjö vs Skellefteå also had top 6 implications and the Lakers loss would prove to be a costly one once all was said and done. But perhaps the most important game of the night and potentialy, for the teams involved, the most important game of the year, was a battle between two teams still in the hunt for the final playoff spot, Linköping vs Brynäs. It was a nail better to the very end, as Linköping needed a win or they would be eliminated from playoff contention. Luckily for them an OT goal from Broc Little that crossed the line by mere millimeters kept their playoff hopes alive and they lived to fight another day. Their victory was also in no small part due to the play of Jonas Gustavsson between the pipes who turned away 51 of the 53 shots he faced. Örebro's victory over Mora also meant that all 3 playoff hunters were still in the chase coming in to the final game of the regular season on Thursday night.

Coming in to Thursday night there were half a dozen scenarios at play when it came to the final three teams looking for a playoff birth. Brynäs and Örebro were tied in points, however, Örebro owned the tie break with a better goals for and against average. Linköping sat 2 points back and were hoping for a win, coupled by a loss from the other two teams. Unfortunately for both Brynäs and Linköping, all 3 teams were defeated in regulation and Örebro backed their way in to the playoffs, completing an astonishing comeback that saw them erase a 14 point defecit in the last month and a half of the regular season. With the win over Örebro and the Lakers loss to Luleå, Malmö moved in to the top 6 and will bypass the 1st round of the playoffs.

Our game of the week on the world feed comes from game 1 of the playoffs in Växjö Sweden on Saturday afternoon as the defending champs played host to Örebro. The visitors came out hard and strong and put together a couple of solid scoring opportunities early on, but were unable to ripple the mesh. Both goaltenders were also looking like they were going to be hard to beat until The Lakers were awarded a powerplay opportunity late in the frame. A pass from behind the net from Tuomas Kiiskinen found Filip Cederqvist in the slot who was able to send it home just as the penalty expired. However, Örebro would answer back almost immediately. A nice streak in to the offensive zone and centering pass from Jonathan Andersson found its way to the stick of Patrik Virta who was able to beat Viktor Fasth five hole to tie the game and send it to the intermission locked at 1.

The 2nd period, much like the 1st, provided some great play from both goaltenders. Jhonas Enroth in particular looked solid between the pipes, turning aside 14 of the 15 shots he faced in the frame. Örebro was able to take the lead early in the frame after a fortuitous bounce off a skate came to Tom Wandell who sprung Tyson Spink on the breakaway and Spink made no mistake rippling the mesh to give them the 2-1 lead. The Lakers would capitilize on another man advantage later in the frame as Roman Horák would find Kris Versteeg with a beautiful cross ice feed that he was able to one time home past Enroth. Despite being outshot 21-11 in the final two periods, the game remained tied in regulation with both goaltenders making some key saves in the final frame and game 1 would require overtime.

With continous 20 minutes periods until a goal is scored in the playoffs and the play of both Enroth and Fasth, this game looked like it might continue for quite some time. Örebro had plans of ending early though as a back door feed to Patrik Virta looked like it was going to end it in the first minute of the extra frame. Unfortunately for Örebro, Fasth made his best save of the game and absolutely robbed Virta in close to keep the tie intact. It wouldn't be long after that the Lakers would break the deadlock. With just over five and half minutes elapsed in the extra frame Julius Juuntilla was able to steal the puck off the boards in the attacking zone. His cross ice feed found Nichlas Hardt who ripped the one timer and despite the fact Enroth got a piece of it with the tip of his glove, it found the back of the net to give the Lakers the OT win in game 1.

HV71 was also able to come away with a victory over Rögle in game 1 of that series on Saturday afternoon. With the first round of the playoffs being just a best of 3 series, both the Lakers and HV71 have a chance to move on to the quartfinals with a win tonight. 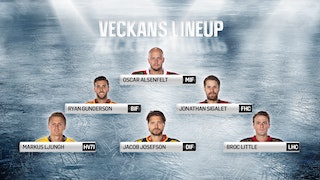 Alsenfelt put forth a great performance this week and helped his team grab a top six finish in the regular season. He turned aside all 32 shots he faced against rivals Rögle and came away with the 3-0 victory. His performance was enough to grab him his second top line of the week honours in the final week of the regular season.

Our second entry in this weeks top line is no stranger to the list. Despite the disspointing finish to the season and missing the playoffs, Gundersson was crucial in helping Brynäs​ push for the final playoff spot. With a goal and an assist against both Linköping and Frölunda, the defensemen did everything he could to help his team win. Gunderson finishes the season on a high note with his 5th top line of the week honours.

Another first appearence this week comes from the Indians blue line. Despite the teams loss to Djurgården on Tuesday, Sigalet was on the ice for both of their goals scored. He followed that up with a goal and an assist against Brynäs on Thursday and finished the week +6. His performance this week was enough to grab his first top line of the week nomination.

Along with Sigalet, Ljungh led the league in the plus/minus category, finishing +6. He also finished the week with 3 goals and 2 assists in HV71's victories over Timrå and Linköping and helped his team secure home ice advantage in the 1st round of the playoffs.

The Captain lead by example this week in two heavyweight battles against Frölunda and Färjestad. Aided by a goal and an assists by Josefson on Tuesday against the Indians, Djurgården would come away with the 4-2 victory. Thursday night against Färjestad would require a shootout, and in extra shooters Josefson would score the game winner and finish the season on a high note. With his performance, Josefson grabs his 4th top line of the week nomination.

Although Linkopings season ended without a playoff appearence, Little was the main reason why they lived to fight another day after their game against Brynäs on Tuesday night. Scoring two goals in the game against Brynäs including the overtime winner, Broc Little became just the second North American born skater in SHL history to score 100 goals in his career. For that he earns his 3rd top line of the week honours and the final spot on this weeks list.

Check out this weeks top goals and saves!