For the third time in six years the Växjö Lakers hoist the Le Mat Trophy as Swedish Champions, and we also take a look into this weeks player transactions.

Coming into game 5 on Monday evening the Växjö Lakers carried the 3-1 series lead into the matchup with a chance to claim the Le Mat trophy on home ice. Despite a relatively slow start to the game Rögle was able to take a 1-0 lead into the 2nd period after a beautiful assist from Éric Gélinas set up Olli Palola for the tap home. The 2nd period proved to be much more lively than the first, it was fast and hard with big hits being exchanged on both sides. The physicality really started after a thunderous hit from Erlend Lesund on the young Jack Drury at center ice. From that point on both sides were going hard into every hit. Pontus Holmberg would finally get his team on the board as his individual effort in tight found its way home to send the game into the second intermission all locked at one goal apiece.

The 3rd period offence started quickly as a breakaway opportunity for the Lakers was buried by Fredrik Karlström to give the Lakers the lead. They wouldn't take their foot off the gas after that goal as Jack Drury extended the lead to 3-1 about 10 minutes later. In an effort to battle back, Rögle pulled Johan Gustafsson with more than five minutes remaining, which resulted in a pair of empty net goals from the Lakers. An additional goal by Pontus Holmberg cemented the win, despite a late goal by Olli Palola, and the Lakers came away with the 6-2 win and the 4-1 series victory.

Pontus Holmberg was awarded the Stefan Liv Memorial Trophy as the playoffs Most Valuable Player. He finished the post season with 7 goals and 7 assists in 14 games played. Holmberg said after the game "I never thought I would be part of this. It's so wonderful. It's hard to believe it's true. It's so much fun that everyone gets to score, that's important. We always felt in control." 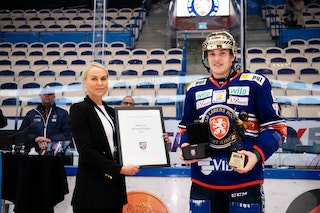 The big news of the week was todays announcement by Dick Axelsson that he would be retiring from hockey. The 191cm/96kg forward started his professional career with Huddinge in Division 1 back in the 05/06 season. He was drafted 62nd overall by the Detroit Red Wings in 2006 and played 17 games with their AHL affiliate, the Grand Rapid Griffins. He had a three season stint in Switzerland with HC Davos, but the majority of his career was spent playing in the SHL. He finishes his SHL career with 434 games played with 121 goals and 176 assists.

After their win this season the Växjö Lakers will be losing a four players. Erik Källgren, Tim Erixon and Marcus Sylvegård will not be returning to defend their title with the Lakers next season, it is unknown where they will end up. Ilari Melart will also be leaving as he has signed with Adler Manheim of the German DEL league.

Rögle has also had some player movement over the last week as Niklas Hansson has signed with EV Zug in the Swiss League, Johan Gustafsson will not be returning and Simon Ryfors has signed with the Tampa Bay Lightning.