William Wallinder, 20, is one of the rising stars of the SHL. Yet he was left out of Swedens WJC squad just a year ago. But the Sollefteå born D-man turned it to his advantage and by the help of Niklas Kronwall he is now following in the footsteps of Moritz Seider.

The Williams. That could (or maybe not) be the name of a indie rock band from Manchester. But, at least in this context, it’s a group of young Swedish hockey players making a name (William, that is) for themselves. First came William Karlsson, then William Nylander, William Lagesson and William Eklund. Now William Wallinder is having a break out season in the SHL.

“I started this season with lots of confidence from the coaches, I felt like they could trust me in whatever situation they put me in”, William says. “Of course it’s easier to play well when you don’t have to work your way in to the roster”.

To understand just how good of a season William Wallinder is having, we’re going to have to dive in to some statistics, but let’s save that for later and get to know the defenseman from Sollefteå first.

What was it like growing up in the small city of Sollefteå?

“As you say, it’s a small place, but I really enjoyed my childhood there. Most of my friends played hockey which also my older brother Pontus did, so I spent a lot of time at the rink and felt right at home there”, William says, adding that he played forward before settling in as an offensive D-man.

What kind of person were you in school?

“Without making that much of an effort I managed school pretty well, but I liked recess more”, William says laughing.

Were you a talent early when it came to hockey?

“Yeah, I think I was pretty par ahead in my development early on, but I suffered from a broken ankle joint when I was 13. That held me back for almost two years, before I managed to push through it.

Was that hard for you mentally?

“Back then it was tough, no question”, William says honestly. “But I knew I was going to get fully recovered, not having any trouble from the injury in the long run. Perhaps it even made me stronger mentally, having battled it out”.

Sollefteå is pinned pretty much right between Sundsvall and Örnsköldsvik, but since it belongs to the province of Ångermanland, hockey players from Sollefteå tend to move to Ö-vik when things get more serious.

“I thought about a few other options at first, but in the end it felt natural to move to MoDo. I knew everyone there and knew that it would be good for me”.

Developing in to a SHL player

Moving from his home town Sollefteå to coastal town Örnsköldsvik, known as the home of hockey talents such as Peter Forsberg and the Sedin twins, worked wonders for William Wallinder. Over the course of one summer – the summer of 2019 – William Wallinder took a huge step, going from a modest role in MoDo J18 to showing off his skills in HockeyAllsvenskan. That kind of development was a surprise, even for himself.

“Yeah, I wasn’t prepared for that at all”, he says smiling. “Actually, I was almost chocked how well things went”.

“Björn Hellkvist and Pär Styf, the coaches, really believed in me and to be honest I think my J20 coach Micke Sundell pushed a lot for them to give me the chance in the men’s team”. 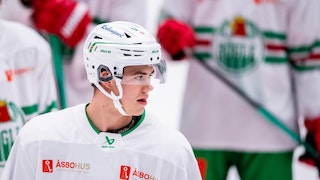 William Wallinder was drafted by the Detroit Red Wings in the second round of the 2020 NHL Draft. Photo: Niclas Jönsson / Bildbyrån

At the same time, the covid virus hit the world, and few things stayed the same. The NHL Draft was one thing that had to be adjusted to the new reality, and unlike he might have dreamt about, William Wallinder could not be in Bell Centre to hear his name being called by an NHL team.

“It was a bummer to miss out on that”, he nods. “But being drafted was an unbelievable experience anyway, and something I will remember for the rest of my life”.

“After the Red Wings had picked me I got a call from Niklas Kronwall and I also got to talk to Steve Yzerman. It was really cool to talk to such a legend”.

After retiring from his own professional career, the triple gold club member Niklas Kronwall has taken on an advisory job with the Red Wings, which means he spends a lot of time working with the club’s prospects.

How much have Niklas Kronwall helped you in your development?

“Quite a lot, I would say. He’s here in Ängelholm pretty often, working with the Red Wings prospects. He’s really helped me with a lot of small details in my game, and he’s very easy to work with”, William says.

Did the Detroit Red Wings have any part in your decision to move to Rögle?

“Well, maybe they did, but I didn’t really talk to anyone about it. I’m sure they talked to my agent and Chris Abbott though, but anyway I’m very pleased with that decision, it has really boosted me”.

After playing a full season of pro hockey in 2020/21, William Wallinder decided to move to Ängelholm and Rögle BK (along with another William, William Strömgren to be precise). He insantly received a lot of trust on the blue line from his Canadian coach Cam Abbott, and scored his first SHL goal on October 21 against Skellefteå.

“I received the puck in the high slot and I’ve been in that position a lot of times before so I just acted on instinct and dangled the defender. I kind of knew exactly where to shoot also, but it was nice to see it hit the net.” 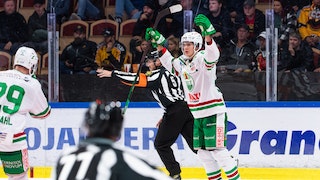 William Wallinder after scoring one of his goals this season. Photo: Simon Eliasson / Bildbyrån

Do you scout goalies before the games?

“No, never”, William replies quickly. “I’m a defenseman so if anything I try to study forwards.”

Which forwards in the SHL are hardest to play against?

If the transition to the SHL went smoothly for William Wallinder, playing with the Juniorkronorna, or rather the lack of playing there, was a bump in his hockey road. Ahead of the World Juniors in 2020 he tested positive for covid and had to turn down participation, a year later he was rather surprisingly left out of the Swedish squad – just to see the tournament being abrupted and postponed to the next summer where he got to represent Sweden and winning a bronze medal.

“It was a bit of a roller coaster ride looking back at it”, he says and laughs. “It sucked testing positive for covid just before the tournament, but at that point I knew I had one more shot at the WJC. When I was left out of the team the year after that, even though I thought I had earned a spot, it was a hard blow for me. I accepted their decision and tried to make the best of it by playing my best at home with Rögle. I think that also worked out pretty well for me, since I got my chance when the tournament was finally carried through this summer”.

Coming off that WJC tournament William Wallinder has had a tremendous start to this SHL season. We mentioned earlier that we would take a look at just how impressive he has been. Weighing in that Rögle, a top tier team for the last couple of seasons, have started a bit slower than most expected, William Wallinder’s showing is even more impressive. He leads his team in ice time by more than two minutes, he’s scored eleven points (four goals and seven assists) which is third best on his team, has shot 42 shots on goal which is seven more than the second best on the team and is tied number one on his team when it comes to points produced on the power play.

“Well, I think my main assets are my skating and skill, I like to be a creative player”, he explains.

After the success of Moritz Seider, it’s not unlikely the Detroit Red Wings will want William Wallinder to take that same leap as he did, from Rögle to Motown.

“I haven’t thought about it that much lately”, he says. “It’s something I will have to decide after the season, but right now I’m just trying to work on my two way game, trying to be a guy the coaches can rely on in all aspects of the game”. If he keeps this up the indie rock ba… ehrm the Swedish hockey players in NHL named William will have a new member. And it looks like it will happen rather sooner than later.