In his first real season in the SHL, Pontus Andreasson has been flying almost from the get-go. After a few seasons in the Frölunda organization, he's made it to the SHL via third tier HockeyEttan and HockeyAllsvenskan.

Luleå is having yet another good regular season. Throughout the years, the organization has had to change both integral and complementary parts from time to time. And they've done so by finding players pretty much everywhere; from the nearby teams in the lower divisions to the NHL organization. In hockey terms, 23 year old Pontus Andreasson was right around the corner, having spent his two last seasons in HockeyAllsvenskan with Umeå based Björklöven, some 265 kilometers south of Luleå. There, he put up 52 points in 103 regular season games – adding another eleven in 16 qualification games for promotion last spring. Although Björklöven failed to gain promotion to the SHL, Andreasson did not.

"It’s been a while now, but there was some other team interested in me but Luleå showed the most interest. It felt like a natural progression and in speaking with Thomas Berglund (coach), it really felt like they were interested in me as the player I am. It was really easy to make the decision," he explains.

Coming through the Frölunda ranks a few years back, Andreasson did play one SHL game with the club. But this being his first real season in the league, he is still a rookie - and adapting to the new environment hasn't been much of an issue.

"I was really excited when I found out Luleå were interested in me. They’ve been a powerhouse in the league for quite some time and it felt like a good fit for me to join the club. When adapting, a lot has to do with patience, and I’ve had that. And knowing I was joining a really good team sure helped." 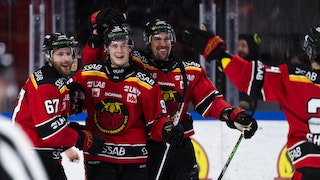 Andreasson says he didn't know anyone on the team when he first joined. And although it can be a bit nervous coming in to a new dressing room, those nerves were soon put at ease and Andreasson says it's been a perfect match right from the start. Since the beginning of the 2017/2018 campaign, Luleå have had Thomas Berglund behind the bench. An outspoken, honest man who spent 16,5 seasons with the team as a player back in the days. And Andreasson like the style.

"He’s a great coach. He is honest, he pushes you and sometimes when I’m not working hard enough he’ll let me know. He really cares about the team and the organization. When you do something he’s not satisfied with, he’ll let you know, for sure."

At the time of the interview, Luleå are second in the league, behind rivals Skellefteå. Andreasson himself is on a three game point streak (2-3--5) and is second on the team in scoring, behind Linus Omark.

Speaking of Omark; Together with the SHL superstar and the dynamic, irrational Juhani Tyrväinen, Andreasson has formed a lethal weapon for Luleå. The three haven't been playing a whole lot together. But ever since Berglund put them on the same line, sparks have been flying everywhere, with Omark also being on a three game point streak (2-6--8) and Tyrväinen being above a point per game in the past three games (1-3--4).

"It’s felt really great playing together from the get-go. We haven’t played that many games together, but we’ve got a good chemistry. We’ve watched a lot of video. I don’t know really, but we’ve got something and it’s been a good feeling from the start, playing with them."

With Omark doing Omark things and Tyrväinen quite literally being a battering ram while scoring, you seem to slot in somewhere inbetween to balance the line out.

"Yeah, it’s been working really well so far. Both Tyrväinen and Omark are great players. For me, I need to try to play my best and contribute." 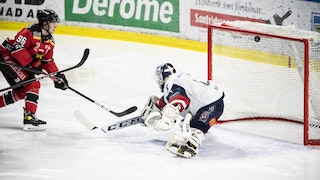 With 21 points, nine being goals, in 36 games, Andreasson is also second in scoring among the league rookies. When being asked about adapting to the league, Andreasson says:

"It’s been pretty easy getting into our system and the way we play. But you can tell the league is next level compared to HockeyAllsvenskan. It’s harder getting to the scoring areas, creating chances and to score, obviously. But at the same time you get to play with better players. Players able to help out to get you the chances anyway. I don’t know, it’s a tough question. But obviously you notice differences."

Andreasson says he started playing hockey at raound the age of five.

"I’m born and raised in a smaller town and hockey was the biggest sport among my friends. So it came naturally for me to kind of tag along. My dad has been playing some hockey as well. I fell for the sport right away and it’s been my favorite sport from day one. I’ve played other sports as well, like soccer and floorball and table tennis. But hockey was the sport I really took to heart."

Quite a few players tells the story of playing indoors, much to the distress of their parents, did you do the same thing?

"Haha, yeah. I played a lot of ball hockey indoors. There were a few broken vases and stuff," he laughs.

Practicing on the ice, working on his game, has always been Andreasson´´'s way of life. Working outside at a young age wasn't exactly high on the list. But when joining the Frölunda U20 team, he realized that to make it, you need everything.

"I didn’t have the same energy for the physical training like for the on-ice stuff. I’ve always wanted to be on the ice, playing, practicing or playing on open rinks after school. In recent years, I’ve learnt that the physical aspect of the training is really important as well," he says, continuing:

"When I joined the Frölunda U20, I sort of flicked a switch. I didn’t play a whole lot from the start there. So I had to build some muscle through hours at the gym. I wanted to play so I really had to put the work in."

He did. And after leaving Frölunda he worked his way through third tier HockeyEttan with Hanhals IF for a season and a half, before moving to Björklöven for another two seasons. And while the journey to the SHL might have been longer than anticipated by some, it has given Andreasson some insights.

"First and foremost, I’ve always kind of been able to play my game. Had I been promoted to the Frölunda first team at a young age, maybe I’d have to change my game to grind out two minutes a game to start. This way, I’ve been able to keep my foundation as a player and kind of hone my game and become the player I am today."

And it's been worth it. There's a warmth in his voice when he speaks of Luleå Hockey and although he has another year on his deal after this, Andreasson can see himself staying with the club a while.

"We, me and my girlfriend, like it up here, a lot. I’m comfortable with the team and enjoying my time. She’s getting along really well with the other player girlfriends. I’ve got another year on my deal with Luleå to go, and we’ll see after that. But like the way things are now, I’d love to stay for a longer period of time. But we’ll see," he says, laughing.

If he keeps a pace like this, it's not hard to think he'll be around for a while. The path here was not uncommon. And while it wasn't straight, it shaped Pontus Andreasson to the player he is today. Now, it's all about taking another step.

"I want to establish myself as a player in the SHL. We’ll see where it leads," he says.