With the league on an international break, we don't have a featured team for this weeks article. We will, however, take a look at individual player news and you can check out the top goals and saves from around the league!

It was reported last week that the young William Eklund might be rejoining Djurgården for the rest of the season. This week that has been confirmed. Eklund played nine games with the San Jose Sharks, tallying four assists. Eklund also scored 23 points in 40 games played last season and was named SHL rookie of the year.

– Williams' return feels almost like a new acquisition. Of course, we have not stopped hoping that he would return, but we did not plan for that with his strong start to the season in San Jose, says the strategic sports manager Joakim Eriksson.

More good news for Djurgården as they have inked new deals with both Linus Arnesson and Liam Öhgren.

This is Arnessons first season back in Djurgården since the 2014/15 season. However, previous to that, he was part of the club in HockeyAllsvenskan and came up through their junior program. He was also selected 60th overall in 2013 by the Boston Bruins and spent two full seasons with their AHL affiliate.

– Linus is passionate about the team and the defence. It feels great to have Linus with us in our journey towards sporting success, says Djurgården's strategic sports manager Joakim Eriksson.

Arnesson has also spent time over the past four seasons with Örebro and Färjestad. The contract is valid through the 2023/24 season. 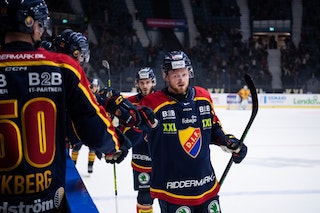 The young Liam Öhgren and Djurgården have agreed to a one season rookie contract. The 17 year old made his SHL debut this year and has played in 14 games so far this season, scoring a goal and an assist. Öhgren is born and raised in Stockholm and has been a part of the Djurgården junior organization since 2018.

– Liam is another product of Stockholm hockey and our fantastic talent development. Despite his young age, he already has the physique of a man, which has helped him play in the SHL team in a very good way during the start of the season, says Joakim Eriksson.

Öhgren is eligible for this summers NHL entry draft and is projected to go late in the first round or early in the second.

Despite their success so far this season, Frölunda may have a few rough weeks ahead of them. They currently have a number of players out with injuries, including top forward Max Friberg who suffered a gruesome thigh laceration before the international break.

In order to fill the gaps in their roster, Frölunda has borrowed the young Jacob Olofsson from Timrå for two weeks.

– We have some tough weeks ahead of us and need to do this to tackle the situation we are in. We are grateful to Timrå that we get this opportunity, says Frölunda's sports manager Fredrik Sjöström.

Olofsson was not the only player to be lent out by Timrå this week. Viktor Liljegren has also been loaned to HockeyAllsvenskan club Västervik until December 18th. The 27 year old made his SHL debut this season with Timrå, playing in 10 games. He played last season with Västervik and had previously played two seasons with Karlskrona.

– Viktor needs playing time and in Västervik he can get it. He has been there before and is familiar with the club. A loan until December 18 is a good solution, says sports director Kent Norberg.

Long time Örebro defenceman Gustav Backström will be adding at least two more seasons to his tenure in Örebro as he has a signed a deal valid through the 2023/24 season. The 26 year old made his SHL debut with Örebro back in 2013 and has been a mainstay on their blueline since the 2016/17 season.

– We are very happy that Gustav will stay with us until 2024. A guy from the region who is now in his ninth season at the club. Gustav stands for professionalism both on and off the ice. We think that he has taken great strides in his game and also developed a lot as a person and as a leader. We see Gustav as an important cog in Örebro Hockey and together we will continue to develop further, says Örebro's sports manager Niklas Johansson.

Backström has played all 269 of his SHL games with Örbero, tallying 7 goals and 29 assists in that time.

Linköping made some moves this week to try and improve their situation, signing forward Vilmos Gallo and loaning Jimmy Anderssson.

– I'm super happy. It feels like I'm coming home again. LHC and Linköping mean a lot to me and I am very excited to be playing in Saab Arena again, says Vilmos Gallo.

Gallo started the season with Luleå scoring 2 goals and 5 assists in 16 games played. He spent the last two seasons in Finland playing with KooKoo.

Linköping also announced this week that they will lend forward Jimmy Andersson to Vita Hästen in Hockey Allsvenskan. The loan is valid until further notice.

– Jimmy needs more ice time than we can offer right now. Together, we have come to the conclusion that this is the best solution right now, says LHC's GM Niklas Persson.

SHL has seen a strong increase in exposure internationally. In addition to Sweden, SHL is now available via TV and streaming platforms in a total of 166 different countries.

– It is extremely satisfying to see such an increased internationally interest in SHL and I’m delighted that we are now available in so many international territories, says Jenny Silfverstrand, CEO of SHL.

Read more about this and how you can follow SHL.