Luleå has captured the SHL's Seriesegrarpris as the top regular season team. Having already eclipsed their previous best points total and with two games remaining in the regular season, it has been a historic year for the most Northern team in the league.

Coming into the week this week, Luleå sat comfortably in 1st with an 11 point lead over second placed Skellefteå. However, with five games remaining in the regular season they still had not guaranteed themselves a top place finish.

Their first game of the week gave them a chance to secure 1st in the regular season, a regulation win for Luleå, couple with a regulation Loss for Skellefteå would put them 14 points ahead with just four games remaining. It was an absolutely dominant performance against Rögle that saw Luleå allow just 12 shots on net throughout the entire game. 8 in the 1st, 1 in the 2nd and 3 in the 3rd. Adding 24 of their own, including three goals, was more than enough for Luleå to come away with the 3-0 shutout victory and capture their first Seriesegrarpris since 2011/12 and just their third since 1990.

Their second game of the week was not as successful, but having already secured top spot, any additional points were just for moral. Luleå travelled to Stockholm where they faced off against a Djurgården team who was looking to extend their home win streak to 15 straight. Luleå was also looking to extend their win streak to 8. The game was back and forth, evenly matched throughout all of regulation with both teams finding the back of then net in the 2nd and 3rd. The game would head to overtime all tied at 2 where Linus Hultström would play overtime hero in the very first minute of the extra frame and continue the home winning streak.

Their third and final game of the week was a chance to make club history for Luleå. The single point in the loss against Djurgården gave them 101 on the season, just one shy of their club record set back in 2012/13. The game also just happens to be our...

With club history on the line, Luleå welcomed Örebro to Coop Norbotten Arena for the fourth and final matchup of the season between these two teams. The game started with a presentation of the regular season championship trophy presented to Erik Gustafsson in front of a packed arena. 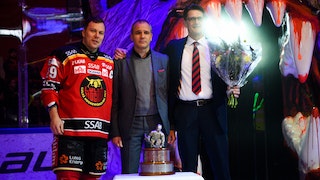 Coming into this one, Örebro had had some success against Luleå this season, having secured victories in two of their first three matchups, but Luleå was hoping to tie things up to finish the season series.

The first period was fairly quiet, with both teams exchanging a few shots, but it was the young Nils Lundqvist who would break the scoreless deadlock. Luleå was awarded a powerplay and Lundqvist fired home his 9th of the season and his junior leading 29th point of the year. Neither team was able to make much more happen in the opening frame as the game would head to the 2nd 1-0 in favour of Luleå.

The 2nd period was much more lively on the shot clock as Luleå registered 13 shots and Örebro followed suit with 10 of their own. Örebro would be the first to strike in the frame as the point shot from Mathias Bromé would be stopped, but Ryan Stoa was righ their to poke it home to tie the game at 1 goal apiece. Despite good chances and plenty of shots throughout the remainder of the frame, both goaltenders stood tall and kept the tie intact until the buzzer sounded. The game would head to the final frame of regulation all tied up.

Both teams came out hard in the third and Örebro was hoping to spoil the celebration in Luleå as they struck quickly in the final frame of regulation. A mishandled shot by Joel Lassinantti found its way right to Jordan Boucher who snapped it home with less then 5 minutes elapsed in the frame. Luleå would get payback however, as Jesper Sellgrens shot just snuck through under the arm of Dominik Furch and trickled across the line to tie the game at 2. The game would require overtime.

It wouldn't take long in the extra frame to find a game winner as Luleå put together a beautiful passing play with just over 2 minutes elapsed. The play would be finished off by Jonas Berglund and Luleå came away with the 2 point victory. With the win Luleå now sit at 103 points, their best ever finish in the regular season. They will look to add to that this week with matchups against HV71 and Skellefteå.

Although Luleå has now clinched top spot, the remaining top six positions are still to be decided. With two games remaining in the regular season, Skellefteå, Färjestad and Rögle sit 2nd, 3rd and 4th respectively, but all have 89 points. HV71 sits 5th with 86 points and Djurgården sit on the bubble spot in 6th with 84 points. Frölunda sits 7th overall with 80 points and will be facing Djurgården in the final game of the regular season. Örebro sits 8th overall with 79 points, Malmö in 9th with 77 and the Lakers sit in the 10th and final playoff spot with 68 points. Both Brynäs and Linköping will miss the playoffs for the second year in a row and Leksand and Oskarshamn will be playing to remain in the SHL in this years relegation tournament.