With the playoffs looming, there were lots of points up for grabs with four game days in just five days this past week.

There was no change in the top four in the standings this week as Luleå, Färjestad, Frölunda and Djurgården continue to sit 1st, 2nd, 3rd and 4th overall. However, none of them were able to make significant movement at the top of the standings as they all grabbed just one victory. Our top mover this week, however, had three games and were able to take advantage of their game in hand.

Malmö certainly had their hands full with a home and home series against the top scoring Djurgården, but a solid effort at home on Tuesday landed them a 3-1 victory and 3 unanswered goals in Stockholm on Thursday propelled them past Djurgården 3-2. They would follow that up with dominant performance at home against Mora on Saturday afternoon as they managed a big 4 goal third period to secure their 5-1 victory. Starting the week with 51 points, 9th overall and at risk of dropping out of a playoff spot, Malmö could not have picked a better time to get hot as they come out of the week with a full 9 points and now find themselves 5th overall and nipping at the heals of the top four. In fact, they are now currently tied with Djurgården at 60 points a piece. This weeks success by Malmö was in no small part to a full team effort that saw 5 separate skaters score 3 points and both Cristopher Nihlstorp and Oscar Alsenfelt put up great performances between the pipes.

Our game of the week on the English world feed this week comes courtesy Linköping and Frölunda back on Thursday evening. Coming in to the game the teams had split the season series at one game a piece, with the home team emerging victorious in both contests. Frölunda looked to change that trend as they came out hard and fast in the 1st in Saab Arena. Creating numerous chances early on they were rewarded with just under 4 minutes elapsed in the frame as Sebastian Stålberg ripped a shot five hole off the draw and gave the Indians the early 1-0 lead. Despite Frölundas dominance in the 1st, Linköping were successful on their first penalty kill of the game. Just as it expired Captain Eddie Larsson stepped out of the box, intercepted an outlet pass and sent a back hander off the stick of Jonathan Sigalet that rippled the mesh. The game would head to the first intermission locked at 1.

The 2nd would be a fairly evenly matched frame with both teams exchanging shots and goals. Jacob Moverare would restore the lead with a wrister from the line that found its way through. Nick Sörensen would return the favor late in the frame and the 2nd would finish the same way as the first, all tied up.

The first ten minutes of the 3rd would prove even as both teams exchanged chances, and both goalies would hold strong. The game winning goal would come in the second half of the frame with about five and half minutes to play. Joel Mustonen would collect at the blue line and let a weak shot go that was intercepted by Ponthus Westerholm and a nice drag move around Jacob Johansson freed up the far side of the net for him to bury the backhander and give Frölunda the 3-2 lead. Despite a solid effort in the final 5 minutes, Linköping was unable to tie things up and Frölunda came away with the 3 point regulation victory.

With 3 games coming up this week, Linköping has a chance to turn things around and get back on track. 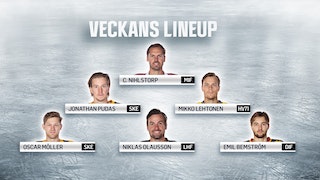 With his first start of the New Year, Nihlstorp did not dissapoint in his performace against Djurgården. Making 45 saves in Stockholm, he was one of the major factors in Malmös 3-2 regulation victory over Djurgården and grabs his first top line honours of the season.

With the ability to create rushes up the ice, solid defensive play in his own end and the ability to contribute on offence, Lehtonen has been a great pick up for HV71 this season. He earns his first top line nomination this week.

Möller was an obvious choice for this weeks top line. Although he was held pointless against Luleå, he proved invaluable against Örebro on Saturday. Scoring two goals, including the game winner with just 0.3 seconds remaining in the game, Möller earns his first top line of the week honours.

Our only returning player to the top line this week is the Captain for Luleå. In their victory over Rögle on Saturday, Olausson lead by example having a hand in all three goals. With one goal and two assists, Olausson earns his second top line of the week nomination.

The young 19 year old has proved to be a valuable asset all season long for Djurgården. He continued to impress this weekend with a goal and an assist in their big win over Frölunda. For that reason Bemstrom claims our final spot on this weeks top line.

Check out this weeks top goals and saves here.