With their last loss coming back on January 31st, Luleå completes their perfect month. They have now put together 9 wins in a row and show no signs of slowing down as they try to claim the title of regular season champions.

Entering this week Luleå and Färjestad were tied at 82 points a piece. But with 3 wins, 8 points and a Färjestad loss, Luleå now sits alone at the top of the leaderboard with 90 points. Frölunda, Djurgården and Växjö continue to bounce around in the 3rd, 4th and 5th spots and Malmö worked their way in to the top 6 this week. The bottom half of the playoff race is going to come right down to the wire as 6 teams are all capable of claiming one of those final four spots for themselves. Örebro continued their success this week as they have now won 7 of their last 9 and put themselves within striking distance of the top 10. With 2 wins and 6 points this week they now sit just 3 points back of both Brynäs and Linköping and could find themselves in a playoff spot by the end of the week.

The bottom half of the playoff race continues to be very tight. Our top mover this week was able to jump from 9th to 6th with just 6 points this week. Malmö didn't start the week off on the right foot as they faced off against a red hot Frölunda team in Scandinavium. Although they were able to open the scoring short handed in the first period and managed to keep the game close right up until the end, the Indians would prove to much for the Redhawks and they fell 4-2. However they wouldn't let that loss discourage them as they put together a solid performance at home against HV71. Backed by a 37 save performance from Oscar Alsenfelt, they held on to come away with the 4-3 victory. Their third and final game of the week was arguably their best performance.

Coming in to Saab Arena on Saturday afternoon against a struggling Linköping team deseperate for points, they went down 2-0 in the first period after Derek Roy and Lukas Bengtsson were able to ripple the mesh. Undeterred, they came out hard in the 2nd and Frederik Storm was able to cut the lead in half early in the frame. The 3rd period would prove to be their best as a pair of goals from Pontus Netterberg and Max Görtz put them up 3-2 and they would hold on to come away with the comeback victory. They now sit 6th overall, just a singe point ahead of Skellefteå.

Our game of the week on the world feed was an outcome probably not a lot of people were expecting. Friday night kicked off game 1 of the home and home series between Mora and Färjestad in Jalas Arena. Mora was certainly the underdog coming in to this one as Farjestad had put together an 8 game win streak. Mora caught a bit of a lucky break early in the first frame as a routine wrist shot from Michael Keränen at the top of the circle fooled Markus Svensson and found the back of the net. We wouldn't have any more offense until half way through the 3rd period but the two goaltenders would put on a fantastic display.

Färjestad would pepper Janne Juvonen in the 1st with 16 shots, but Juvonen made several highlight reel saves and kept the one goal lead intact. The 2nd would prove busy for both goaltenders as a total of 23 shots were kept out of the net and despite his earlier blunder, Markus Svensson was solid between the pipes. Both goaltenders continued to turn away shots in the 3rd and Juvonens great performance would be rewarded with an insurance goal from Spencer Abbott. He was able to collect the puck after Andrew Rowe lost control and a tricky backhander beat Svensson five hole in close. Matej Stransky would seal the deal with a late empty netter and Mora would hold on for the 3-0 shutout victory.

Janne Juvonen was certainly the best player on the ice for either team and came away with a 40 save shutout performance. This was also just the 3rd time Färjestad had been shutout this season and the first since October 4th. 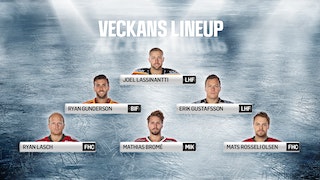 There's no doubt that Lassinantti has been one of the top goaltenders this season and he continued to prove that this week. Giving up just one goal in his two wins, turning aside 41 shots and posting a .972 SV%, he was an easy choice this week for his 4th top line of the week honours.

Our second player also makes his fourth appearence on the top line of the week. Despite the fact that Brynäs lost all 3 games this week, Gunderson contributed on 4 of their 6 goals this week with 1 goal and 3 assists.

The Captain lead by example this week as he was crucial in all 3 of Luleå's wins. He was able to score the OT winner against Rögle with a blast from the top of the circle, he posted over 27 minutes of ice time against Djurgården and added an assist against Timrå. The all around good play from Gustafsson was more than enoughto grab him his 3rd top line of the week honours.

The American continued to impress this week as he aims for the regular season scoring title. With 6 assists and a goal in the three games this week he now sits at the top of the points race with 44 points in 42 games. Lasch grabs his 3rdd top line of the week nomination.

With a goal and 3 assists Bromé played a crucial role in the big 6-1 victory against Brynäs back on Tuesday night. Adding an additional goal against Färjestad on Saturday evening he finished the week with 5 points, enough to grab him his first top line of the week nomination.

Olsen makes his first appearence on our top line of the week with a great performance in his last 3 games. Contributing 3 goals and 2 assists this week he played a crucial role in Frölundas victories.

Check out this weeks top goals and saves!