Having spent his entire hockey career in North America Jason Garrison jumped at the chance to experience European Hockey for the first time. Although he wasn't exactly sure what to expect, the decision was an easy one.

With 555 NHL games under his belt Garrison is 3rd overall when it comes to NHL experience among SHL players. The only two players with more experience in North Americas top league are Linköpings Derek Roy (738 GP) and the Växjö Lakers newly acquired Kris Versteeg (643 GP). Garrisons time in the NHL was spent with 5 different teams, The Florida Panthers, The Vancouver Canucks, The Tampa Bay Lightning, The Vegas Golden Knights and finally, starting this season with the Edmonton Oilers.

Signing a PTO (professional tryout) with Edmonton in the off season, Garrisons future in the NHL was uncertain. One thing that was certain however, was his passion for the game and his desire to continue his professional career. So when the opportunity to play in the SHL came about, he jumped at the chance.

– I wanted to continue playing, I've played with a bunch of guys from Sweden and they had told me a bunch about it... the whole process of coming over here happened really really quickly. I don't think I really had a chance to digest it all. I literally got the call one night and woke up to an offer... For me it was just wanting to continue to play. I knew the league, the country was amazing and it was going to be a different experience.

With so much experience in the top league in the world Garrison would be a valuable asset and a great addition to any team in the league. Although he hadn't specified any team in particular here in the SHL he knew he wanted to play for a team that was in the hunt for a playoff spot. A few teams had shown interest in him, however one team were very happy to make a quick offer and Garrison was soon on a flight to Stockholm.

– Djurgårdens interest was first and they offered right away, it was a very quick process... I had told [my agent] that I wanted to be with a team that was in the mix, didn't have to be first place, but someone that was in the hunt, had a chance to win... It happened very quickly. The original conversation happened at night, then in the morning [Djurgården] had offered and I said: "okay sounds good".

With 39 players of North American descent, they make up just over 10 percent of the the skaters in the SHL. However, with the addition of NHL vets such as Garrison, Versteeg and Roy he believes the leagues popularity with North American players and NHL vets is growing.

– I think there's a lot of guys that came here while the lockout was going on. When things like that happen the hockey world is so small, guys talk to eachother, you hear such great things about it during those times. So when opportunities like this come up you already have a positive experience with it. So they're will probably continue to be imports coming over, because they do such a good job here.

For those who may be unaware, the biggest difference between the NHL and the SHL is the size of the rink. The NHL plays on a surface 85 feet wide (26 meters) and 200 feet long (61 meters) whereas here in the SHL the rink is 15 feet (4.5 meters) wider. It may not seem like much but it certainly has a noticeable effect on the game, especially when it comes to North American skaters who have to adapt to the new size.

– Just being on a big ice surface is a different game in itself, a lot more skating involved...whenever I'm going to do something, in North America it's just a couple strides, but here it's almost double that, I had to get my body adjusted. It's such a wide rink that you also have to adapt your peripheral vision to the rink being so wide. 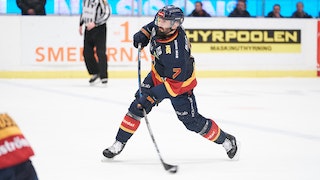 Another big difference between European and North American hockey is not something to do with the game itself, but rather the atmosphere within the arenas. Unlike the NHL, here in the SHL the fans have team chants, team songs, wave team flags and banners and altogether can get a bit raucous in the arenas from time to time. Although fans in NHL arenas do get loud, it's usually only for big plays. Here in the SHL North American skaters get to experience a whole new type of fan interaction.

– It's so different, you're not used to it. Usually [in the NHL] it's hard to hear the crowds unless there's a big hit or a goal, but here it's the full game. You can tune it out for the most part, but more often than not it's much more than North America... but it's a great atmosphere and it's fun to be a part of.

Although hockey takes up most of his time, Garrison has had a chance to experience life in Sweden away from the rink and has so far enjoyed his time here.

– Day to day it's great. Stockholm in a lot of ways reminds me of Vancouver, it's a big city but is still walkable, the weather is very much like Vancouver... so it's familiar which made it easier for me to adjust. I've been able to find a lot of good restaurants, good lunch spots. The coffee is amazing, I'm drinking way more coffee than I ever have. It's just fun to be somehwere different, learning about the city, how to get around. Lots of fun.

With just 9 games remaining in the regular season Djurgården currently sits 3rd overall in the standings and are poised to make the playoffs. Although his future beyond that is uncertain Garrison is very thankful for his time so far here in Sweden.

– This is such a great city, great team, everything about it is awesome. I'm very fortunate I was able to land here.