With 5 post season games days already in the bag these playoffs have already seen 4 overtime games. At this point, with the tight play and exciting action, the quarterfinal final rounds are anyone's to win.

The week kicked off with both Rögle and Örebro battling for their playoff lives as they both lost game 1. Although Rögle got off to a promising start in game 2, HV71 would prove to be to much for them and they fell 4-3 in overtime as HV71 punched their ticket to the qurterfinal round. Örebro were also unable to force a game 3 against Växjö, falling 4-2 and dashing their hopes of moving on to the next round. Despite being swept in round 1 both Örebro and Rögle should consider their seasons a success. Under rookie head coach Cam Abott, Rögle made their 1st SHL post season appearence since 1994 and just their 2nd SHL playoff appearence in team history. Örebro should also hold their heads high as their playoff appearence was one of the more unlikely scenarios to happen this season. With 14 points seperating them from 10th spot at the start of February, they managed to put together an incredible run in the final stretch to secure their post season birth. With the Lakers being the highest seed to come out of round 1, they would face Luleå and HV71 would take on regular season winners Färjestad in the quarterfinal round.

Quarterfinals kicked off Friday evening with HV71 and the Lakers getting right back to work after just 3 days off. Another tight game featuring HV71 didn't yield any goals until the last half of the 3rd period as Färjestad was able to break the deadlock to go up 1-0. However, with the net empty, Captain Martin Thörnberg was able to ripple the mesh in the final minute to force overtime. In the extra frame Robin Figren was able to fire one home with less than 3 minutes remaining in the the 1st OT period. There was a bit of controversy surrounding this goal as minor contact with the glove of Adam Werner drew a review, but the goal would ultimately stand and HV71 would come away with the 1-0 series lead. The Växjö/Luleå game was also a tight one right up until the very end. The game looked as if it was going to also need overtime, but Einar Emanuelsson had other plans as he was able to break the 1-1 tie with less than 90 seconds remaining in regulation. Luleå would add an empty netter to win 3-1 and go up 1 game to none in the series.

Saturday afternoon kicked off the quarterfinals between Frölunda/Malmö and Djurgården/Skellefteå. Malmö had their hands full with the Indians who were able to put 4 pucks in the net in the first frame and come away with the 4-0 victory inside Scandinavium. The other game proved to be a bit tighter as Skellefteå and Djurgården exchanged chances in the first half of the game, but no one was able to break the deadlock. It wasn't until almost the 12 minute mark of the 2nd frame that saw the first goal of the game as Robin Alvarez was able to redirect the pass from Oscar Möller past Adam Reideborn to put them up by one. Skellefteå would follow that up in the final minute of the frame with an absolutely stunning goal. Emil Djuse sent a pass from his own end boards up to the far blue line where Bud Holloway was able to knock it down, slap the rolling puck top corner from a sharp angle and put his team up by 2 heading in to the final frame. Skellefteå would hold on and Mantas Armalis would come away with the 31 save shutout to win game 1.

Our game of the week on the world feed came Sunday afternoon in Växjö as the Lakers looked to tie up the series against Luleå. Coming in to a loud and raucous Vida arena, Luleå​ was able to quiet the crowd almost immediately. Robin Kovacs used his speed to break in to the offensive zone and buried the back hander past Viktor Fasth with just 50 seconds elapsed in the frame. The Lakers would catch a bit of a lucky break later in the frame as Luleå took back to back penalties, giving Växjö a 5 on 3 opportunity, which they didn't waste. A clean face off win from Roman Horák found its way right to Linus Fröberg who took half a second to line up the shot before wiring the wrister past Joel Lassinantti to even the game at 1.

Just like the 1st, the 2nd started with a goal in the first minute of play, this time coming from the hometown team. Captain Liam Reddox collected in his own end, carried through the neutral zone and ripped a slapshot that rung both posts before finding the back of the net to put the Lakers on top. Chances for both teams would continue throughout the frame but the next goal would come with less than 5 minutes remaining in the 2nd. Robin Kovacs was able to pot his second of the game that beat Fasth up high to send it all tied at 2 in to the 2nd intermission.

The 3rd period would prove to be a wild one as both teams would score a pair of goals. After each team was able to ripple the mesh in the first five minutes of the frame, Dominik Bokk would give his team hope of tying up the series. Joonas Jalvanti would turn it over to Brendan Shinnimin whose initial shot was saved, but Bokk at the side of the net was able to shovel it home to give them the 4-3 lead with just over 3 minutes left in the frame. Joel Lassinantti would be pulled shortly after the go ahead goal and some good pressure in the offensive zone created chances for Luleå. Emil Larsson was finally able to overcome the Lakers defense as his shot from the high slot rippled the mesh to tie things and 4 and force the overtime frame.

The Lakers came out hard and fast in the extra frame and generated quality scoring opportunities very early in extra time. Despite there efforts and 5 shots on target in the first 4 minutes, Luleå would break the dealock. Niklas Olausson was able to send it past Fasth after the centering pass from Kovacs found him on the far side of the net. Luleå needed just one shot in overtime to win and they now head back to Coop Norbotten Arena with a 2-0 series lead.

Top Line of the Regular Season 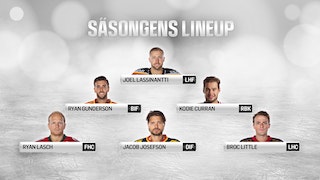 No surprise here as Lassinantti not only lead all goaltenders with with 4 top line of the week appearences this season, but he also lead the league in goals against average (1.68) and save percentage (.931). He also turned aside 945 shots and posted 5 shutouts in 42 games played this season. Joel Lassinantti grabs a well deserved spot on the top line of the season.

Although the season for Brynäs ended without a playoff appearence the American should be happy with his performance this season. At 33 years old Gunderson put forth one of his best career seasons, scoring 8 goals and adding 30 assists. He also lead the league when it came to average time on ice by almost a full minute. His performance this season earned him 5 top line honours and a spot in the top line of the season.

The only other player this season to earn 5 top line appearences, the SHL rookie made an immediate impact for Rögle. After proving to be one of the top offensive defenseman in the Norwegian league he continued that trend this season with 12 goals and 25 assists and played a crucial role in securing the teams first playoff birth in 25 years. The Canadian finished 3rd among defenseman in total points and was an obvious choice for this seasons top line.

One of the players that usually finds himself near or at the top of the points leaders seemingly every season, the American continued that trend this year. Although he struggled mid season, the new year brought about an offensive explosion for Lasch who finished with 50 points in 46 games and earned his 2nd career point title. He also earns his spot among this seasons top line forwards.

The Captain lead all forwards this season with 4 top line of the week appearences. Although the early to mid season was plagued by injuries, Josefson bounced back to help his team secure a fourth place finish in the regular season. Adding 35 points in 40 games played, Josefson earns his spot in this seasons top line.

Although LHC was unable to secure a playoff spot, the return of Little to their line up was a big offensive boost this season. The American scored 17 goals and added an additional 12 assists. With a pair of goals in the 2nd to last game of the season, including the OT winner, Little also became just the 2nd North American born player to score 100 goals in the SHL. He is a well deserved final entry for this seasons top line.