Coming into their matchup against Timrå and Thursday night Linköping had not looked good. They boasted a record of 2-1-1-7 and sat 13th in the standings with just 9 points on the season. They were looking for a spark to turn things around and come away with a victory. That spark turned out to be Robert Lantosi, who came over from Rögle just a few games prior to Thursday nights action.

Linköping was able to take the lead more than 14 minutes into the second period, after neither team was able to ripple the mesh in the first. Alexander Johansson was the one to find the back of the net and gave Linköping the 1-0 lead heading into the final frame of regulation. The third period saw Lantosi score his second in a Linköping uniform to give them the insurance goal, unfortunately it would not be enough to hold on for the regulation win. A pair of goals in just 37 seconds for Timrå late in third tied the score and forced the game into overtime. Despite a number of chances for Timrå in the OT frame, neither team was able to find the game winner. The shootout would yield the game winner from Lantosi and he would secure the victory and a much needed extra point for Linköping.

With momentum on their side after the victory on Thursday, Linköping headed into Saturdays contest against Brynäs looking to build on their previous win. This game was extra important as Linköping sat just two points back of Brynäs and were looking to leap frog past them in the standings.

Linköpings leading scorer and top point getter, Markus Ljungh, would add to his season total with the games opening goal just over seven minutes into the first frame. Neither team mustered many more chances in the opening twenty minutes as Linköping registered just four shots on net and Brynäs just five.

Despite the lack of shots for Brynäs in the first, it was a much different story in the second. The team from Gävle absolutely hammered Marcus Högberg between the pipes, registering sixteen shots on target. Linköping, on the other hand, managed just six of their own and were lucky to make it out of the frame without giving up the equalizer, much to the credit of Högberg.

The third period saw a momentum shift almost immediately as LHC veteran Broc Little found the back of the net just 28 seconds into the frame to give Linköping the 2-0 lead. In stark contrast to their shot total in the second period, Brynäs managed just a single shot on target in the final frame of regulation, which was not able to beat Högberg. Max Lindroth would seal the deal with an empty net goal and Högberg would register his first shutout of the season and his first SHL shutout since 2016.

– Great to be able to win the match today at home. It's unbelievable, you get goosebumps almost all the time. It's incredibly good pressure and incredibly fun to play in front of this audience. Hope it holds up. Winning at home means a lot, says Högberg 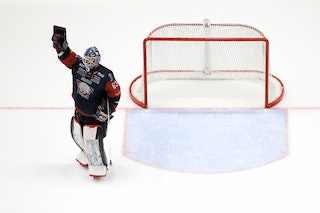 With Brynäs struggling they have brought in help from North America, signing Dmytro Timashov to a two year contract. The 25 year old swede, who was born in Ukraine, has spent the last 7 seasons in North America. After two seasons with the Québec Ramparts and the Shawinigan Cataracts in the QMJHL he was drafted 125th overall by the Maple Leafs. He spent the last five season playing mostly in the AHL with the Marlies and Bridgeport Sound Tigers. Although he did appear in 45 NHL games with Toronto, Detroit and the Islanders.

– In "Dima" we see a hungry forward who is still relatively young. He is in the middle of his career and comes to us because he wants to take the next step. He has always been a great talent and as recently as the 2019/20 season, he did an entire NHL season, says sports director Johan Alcén

This won't be his first time in the SHL, however, as he had a brief appearence with MODO in 2013.

John Nyberg has made a lateral move in the league as he left Brynäs and joined Linköping the day before their game on Saturday, registering an assist against his former team.

– John is a big and strong two-way back with good skating with functional technology. A team player who in the long run will be able to help us in all parts of the game. I look forward to working with him again. As a person, he is a good guy who will fit in well with our group, says Linköping's coach Klas Östman

Before signing with Brynäs last season, the 25 year old played in the AHL with the Stars affiliate teams.

Oscar Nilsson has signed a contract extension and will be staying in Skellefteå for the forseeable future as he has inked a deal that will see him remain in Skellefteå through 2025.

– It feels great to finish with Oskar. He has done very well for us since he came here, so it will be fun to continue for another three years. I think he represents our way of playing in a good way. He is a player who helps us both on and off the ice and makes his teammates better, says Skellefteå's GM Erik Forssell

Nilsson has scored six points in 12 games so far this season and is second only to Jonathan Pudas when it comes to ice time on the team.

Hampus Larsson has, unfortunately, been forced to retire due to a neck injury he sustained last season.

– It has been a long rehabilitation period to be able to continue playing ice hockey. But the longer the time has passed and the more visits and doctors I have talked to, the decision has come closer to quitting than continuing, given the injury I suffered. I have always tried to be positive and felt that I want to play hockey, but in the end thoughts and facts come into play and you realize that it is time to do something else in life, says Larsson to Linköping's website.

Instead of playing hockey, Hampus Larsson will become the new assistant coach for the LHC's J18 team and will be an instructor at the hockey high school.