Coming into the week Leksand was rolling on a four game win streak and were looking to continue the momentum on Thursday evening. They were coming up against a Brynäs team who they had beaten all four times last season and have beaten in six out of their eight previous meetings. Leksand has also managed to grab a single point against Brynäs in all eight of those matches, as both of the victories for Brynäs came in overtime.

This game was a tough one for Brynäs as the struggling team from Gävle managed to score just a single goal, which came in the first frame, tying the game at one goal a piece. Unfortunately for them, Leksand was able to regain the lead before the end of the opening twenty minutes and would not look back. Leksand also heavily outshot Brynäs in the opening frame 16-9.

The second frame saw more offence from Leksand as Isak Rosén, Martin Karlsson and Carter Ashton found the back of the net to push the score to 5-1. Even goaltender Kasimir Kaskisuo jumped in on the action registering a secondary assist on Karlssons goal. Despite the lopsided score, Brynäs was still able to manage a few good chances and registered 11 shots on target in the second frame. Unfortunately for them they just could not find a way past Kaskisuo.

Coming into the game, the four game win streak was not the only active streak for Leksand. Max Veronneau carried a six game scoring streak into the game. Veronneau had also registered five points in his previous two games. The third period would see him extend that scoring streak with the only tally of the frame to bring the score to 6-1 and extend his streak. The win also extended the Leksand win streak and, unfortunately, extended the losing streak by Brynäs to five in a row. 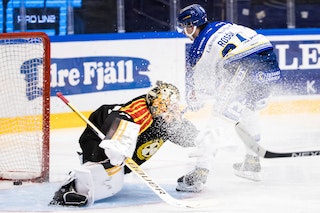 Leksand came into Saturday against an Örebro team that had won their previous two games and had won three of their last four. Unlike the offensive performance we saw against Brynäs, this game would turn out to be a goaltender duel as both Kasimir Kaskisuo and Jhonas Enroth put forth great performances between the pipes.

The first period saw Örebro come out hard and fast as they were looking to quiet the packed arena in Leksand. Registering 14 shots on net and only allowing 6, Örebro were certainly the dominant team in the first twenty minutes, but Kaskisuo stood tall and turned away all the shots he faced.

The second period was a reversal from the first as Leksand, with 18 shots on net, heavily outshot their opponent. The main difference from the first was that Leksand was able to capitalize on their chances. Patrik Norén was able to take the feed at the side of then net and rip it home for the opening goal of the game. Despite the onslaught of shots from Leksand, that would be the only goal of the period.

The pressure and shots would continue for Leksand in the third frame as they absolutely dominated on the shot clock in the final twenty minutes, outshooting Örebro 14-2. Despite the huge advantage, Jhonas Enroth continued to impress between the pipes. Unfortunately for him he could only do so much by himself and Norén, once again, rippled the mesh to make it a 2-0 game. Leksand would hold on for the victory and, in doing so, extended their win streak to six games. Kaskisuo also registered his first SHL shutout. 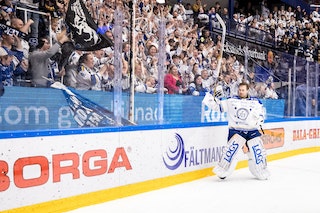 Despite not scoring in the game, Max Veronneau did get an assist on the final goal of the game to extend his point streak. With his assist he now sits at 15 points on the season, just three back of his season total from last year. Leksand will look to keep their streak alive with games against Luleå and Växjö this week.

The defending champion Växjö Lakers have strengthened their roster this week with NHL veteran Tobias Rieder. The 28 year old German has played 478 games in the NHL with the Arizona Coyotes, Los Angeles Kings, Edmonton Oilers, Calgary Flames and Buffalo Sabres. He has scored 64 goals and added 81 assists in his time in the NHL. He has also represented Germany in five World Cups, winning the silver medal in 2017.

– Toby is a player who will fit perfectly into how we play. He works hard at the same time as he has a very good level of skill, says Växjö's sports manager Henrik Evertsson.

This week was surprisingly busy when it comes to player movement. However, perhaps the biggest news of the week is the return of Fredrik Händemark to Malmö. The former Redhawks captain was released by SKA Moscow this week and announced his return to his former club. After starting last season in Malmö he moved to North America for the start of the NHL season in January. He played 8 games with the San José Sharks and 14 with their AHL affiliate.

In his 355 SHL games with Malmö and Leksand he has scored 53 goals and added 99 assists over nine seasons, the majority of which has been spent with Malmö.

– We are of course very happy that Fredrik is coming back to us. He was one of the league's best players when he was last here and we know what we get in him. He is also sets goals and is a leader in the group who will strengthen the squad both on and off the ice, says Malmö Redhawks sports manager Patrik Sylvegård. 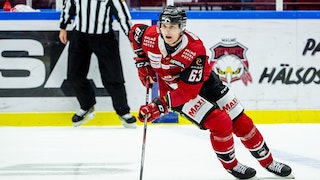 Tobias Ekberg made a lateral move as he goes from Djurgården to Leksand. Ekberg will be rejoining Leksand as he was part of their junior program for four seasons. Ekberg has also previous played with the Malmö Redhawks.

– In Tobias we get a defenseman with good mobility and skating. He will fit well into our way of playing, and above all help us on our back end. It feels good that we are broadening our defence, which has been hit hard by injuries, says Leksand's GM Thomas Johansson.

The contract extends through the 2022/23 Season.

Robert Lantosi has also moved from one SHL club to another as he goes from Rögle to Linköping. The 26 year old from Slovakia has previous experience in Sweden playing in both HockeyEttan and HockeyAllsvenskan. He appeared in six games with Rögle to start the season.

– It will be so fun. I am happy to be here and I hope I can do a lot for the team, says Lantosi.

Örebro has signed a pair of their young players to long term extensions as Elias Ekström and Oliver Eklund inked deals this week.

20 year old Ekström has registered one goal and four assists in ten games this season and has been awarded with a contract that is valid through 2025.

– We are very happy to sign a longer agreement with Elias. A guy from the region who has made a great journey in with our team. Elias is a very smart player and has an extremely good eye for the game. Elias has started the season strong and we see him as an important player over a long time to come. It will be fun to follow Elias' continued progress in the Örebro jersey, says Örebro's sports director Niklas Johansson.

Eklind has also been awarded with a long term extension which will see him stay with Örebro until at least 2024.

– It feels great that we manage to extend the contract with Oliver. He has made an impressive journey since he came here, which we have seen here during the start of the season. We believe very much in Oliver and see great potential in his game, says Niklas Johansson.

Skellefteå has extended the contract of Måns Forsfjäll. The 19 year old mad his SHL debut last season and has appeared in all ten of Skellefteås games this year. The contract is valid until 2024.

Linköpings goalkeeper Niklas Lundström, who has not appeared in a game this season, has announced he will be moving to the Austrian league to play with Grz99ers. He joins former team mate Andrew Gordon in Austrias top league.

Oskarshamns Oliver Larsen will be heading across the baltic as he announced this week he will be joining Jukurit in Liiga.