Just two game days on tap this past week in the SHL, but with all teams in action, it proved to be a busy week in the standings.

The race for the top has been tight all season long and continues to be a close battle between the top 11 teams. Luleå sits atop the standings with 58 points and nipping at their heals is Frölunda with 57. However, just seven points separate 1st and 7th at the moment, so a team on a hot streak could move up the standings rapidly.

Our top climber this week was Djurgården, who came in to last weeks action 9th overall and at risk of falling out of a playoff spot, but with two straight wins they propelled themselves in to the top six. With the addition of NHL veteran Jason Garrison to their back end, expect Djurgården to make a push for top spot as we get closer to the playoffs.

A couple of hot teams were put on ice this week as Linköping carried a 4 game win streak in to Thursdays action, but failed to grab a single point, losing both games in regulation and dropping 3 spots in to 7th. Malmö also found themselves on the wrong end of the score sheet in both games, falling to 9th overall and now sit just three points ahead of Skellefteå in 11th.

Game of the week on the English language world feed came courtesy HV71 and Färjestad. The big news coming in to the game was the long awaited return of HV71 captain Martin Thornberg, who has missed the whole season due to a lower body injury. Although he didnt have a huge impact in the game, just his presence in Kinnarps Arena was a boost for the team and the fans.

The two rivals put together yet another exciting game that came right down to the wire. A penalty shot was awarded to HV71 in the final frame and Oscar Sundh made no mistake, beating Adam Werner short side, putting HV71 up 3 to 1. However, the two goal lead was short lived as Oskar Steen would answer back just over a minute later. Despite a frantic effort with the net empty, Färjestad was not able to find an equalizer, and HV71 grabbed their 5th win in 6 games, finishing the week in 5th spot with 52 points.

SHL's Top Line of the Week 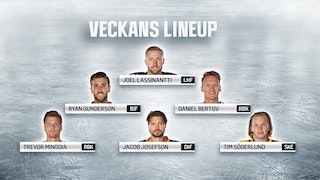 With back to back wins for Luleå, Lassinantti posted a .944 SV% and allowed just 3 goals in his two wins against Örebro this week. Enough to earn him a spot on this weeks top line.

With a goal and an assist in the 2-1 victory against Frölunda and his presence on the ice against Brynäs, the American comes in as one of the top defencmen for this weeks top line.

With the second most time on ice for Rögle this week, finishing +3 and assisting in a big 6-4 victory against Malmö, Bertov secures his spot in this weeks top line.

Despite struggling lately on the point sheet, Josefson broke his point drought against Linköping on Saturday, as the Captain scored once and added 2 assists in their 6-3 victory over Linköping, securing his spot on this weeks top line.

Finishing the week +4 and scoring 1 goal and 2 assists, the 20 year old Söderlund secures his spot as the final forward on this weeks top line.

Check out this weeks top goals and saves here.