One season in Denmark became two seasons and taking a rather different route to pro hockey, he is making his name in the SHL with Oskarshamn. Meet Toronto born forward Cameron Brace.

He's born and raised in the Greater Toronto Area. But coming over from Canada to play hockey, Cameron Brace made his name in Denmark for two seasons, putting up 110 points in 78 regular season games with the Herning Blue Fox. After that, he had a few options and in the end he landed in Oskarshamn, a decision that turned out well.

"It’s been really easy transitioning here. There’s a couple of guys… Philip Samuelsson and Fredrik Olofsson, they’re both Swedes but they’re pretty much like North Americans as well. They’re kind of dual, they speak perfect English and obviously Swedish. They’re very welcoming and they can kind of translate to us if there’s something we’re missing. And having the Americans and other Canadians here has made it really easy for me to transition into the Swedish lifestyle," he explains over the phone.

In the wake of the Covid-19 chaos that erupted in the spring of 2020, the then bottom team Oskarshamn avoided relegation and stayed in the league as all Swedish leagues were closed for promotion and relegation. And the Oskarshamn leadership have made the most of it.

"I think a lot of players and the coaching staff wants to prove that we’re here for a reason. Everyone kind of has something to prove, playing with a chip on their shoulder, showing what you’ve got," Brace says, continuing:

"I think that’s the best way to play, when you’re not too complacent. Every night you want to prove that “We’re here, we belong here.” All the players feel the same way and I think that’s the major key to our early success and for us to come together as a unit."

A few years back the Vegas Golden Knights entered the NHL with an "a bunch of misfits" aura to prove everybody wrong. Without any other resemblance, is that in any way like what you have in Oskarshamn?

""Maybe not exactly the same way. But yeah, I agree. Like you said, they were kind of given a second chance in the league and everyone they’ve brought in have done a really good job. And I think Filander and Fröberg have brought in character guys that are good away from the rink. I think that’ just makes being at the rink and playing together that much easier." 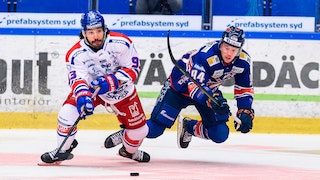 Brace has adapted to the Swedish hockey. And he's enjoying it. Photo Credits: Jonas Ljungdahl (Bildbbyrån)

Fröberg is Thomas Fröberg, the general manager who signed Brace to the team. Filander is Martin Filander, the head coach. And the Canadian forward has nothing but praise for his coach and the staff.

"I think he’s probably been the most forthcoming and honest coach I’ve played for, at least in the recent years. He’s kind of changing into that new era of coaching. That goes for all our coaching staff but talking about Filander specifically, he makes it more of a camaraderie thing. He talks with you, he sees you." Brace says, continuing:

"You feel involved. In the decision making, he listens. And when he makes a line change he’ll come to you and explain to you like “Hey, this is what I’m thinking...I think this will be good...” kind of thing. Normally you might not get that from coaches or GM’s. They make a change and then tell you to go out there and play!" Brace laughs. "It’s been really, really refreshing. You don’t tiptoe around the rink. You know because he’s very outgoing. It’s been really nice playing for him."

Brace has adapted well to the SHL, notching seven goals and 13 assist in 30 games. What does he think of the league so far?

"I get asked this a lot and it’s a good question. I honestly think it’s been the best league and the hardest league I’ve played in so far," he says calmly.

But it seems to suit you.

"Definitely. I say that with a grain of salt. I enjoy it so much. It’s very suited towards my game, it’s a little bit more faster, skilled game. But at the same time systems are very prevalent. Comparing it to Denmark… I don’t think teams relied on systems. If you go out there you just try to score more goals than the other team..."

Cameron Brace grew up in the Greater Toronto Area and with that, he grew up with hockey everywhere. But unlike many of his peers, Brace went the school route to hockey.

"Growing up where hockey is so prevalent in the kids upbringing and there’s so many people who play hockey but the talent level is very high and everyone´s main goal is to get to the NHL. They maybe try to play in the OHL or maybe CHL and maybe go from there. I think for me, the opportunity to play pro was there but at the same time I kind of wanted… You get money to play to go to school. You get a school package when you play in the OHL," he explains. 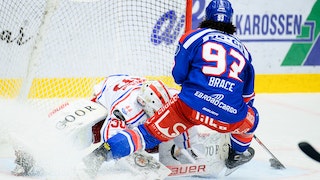 And while the rules and stipulations have changed now, Brace had to make a rather quick decision. Back then, if you played more than three months pro, you forfeited the money. And with no AHL deal in sight, the East Coast would have been his best bet.

"Talking with my parents, they really wanted me to go the school route and that was sort of my decision and when it came to choosing school I just wanted to choose a school with the best hockey program so I could go there and maybe focus a bit more on hockey than school…!" He laughs.

He studied sports management and once his playing career is over, Cameron Brace hopes to make use of that.

"My studies were more on the managers perspective and the recreational side of sports. So, maybe like community centers and youth programs. For me, I’ve always been around sports. It’s been my whole life, and maybe afterwards, if I can do something in that world that would be really fulfilling."

Did you play any other sports growing up?

"I played baseball for most of my childhood as well. I know it’s not too popular in Europe. So yeah, I played baseball in the summers and hockey as a winter sport. A lot of kids will play lacrosse or baseball as a summer sport growing up. Some kids play soccer. "

So with Toronto having the Leafs, obviously, and the Raptors in the NBA and the Blue Jays in the MLB, it’s almost like they’re an extensions of the US in Canada in terms of sports.

How would you describe yourself as a player?

"I would say, I think my main assets would be my speed and my offensive awareness and probably my shot. I try to use those to my best abilities. I’m a fast up and down winger and I try to use my skill in the offensive zone," he says.

Our talk is nearing the end but there's one final question to be asked.

"No, not really. I sometimes follow maybe like a routine. But if I don’t do it I won’t dwell on it. Sometimes I follow routines, for the most part I’ll ask my girlfriend to make the same meal the day before," he laughs.