Coming into Thursday evenings contest against Linköping, Leksand was on a four game losing streak and looking to turn things around. They were, however, coming up against an LHC team that were on a four game win streak and were playing the best hockey we've seen from them all season, the game did not dissapoint.

Linköping got off to a dream start in front of the hometown crowd as Christoffer Ehn was able to send one home after a beautiful effort from Broc Little set him up just 19 seconds into the frame. The lead was short live however as Max Veronneau would tie it up just over 90 seconds later. Before even hitting the four minute mark of the first frame, Ben Maxwell would ring one of the far post and in for his first SHL goal to restore the lead for Linköping. Broc Little would then have a prime opportunity to extend the lead to two as he received the puck at the side of the net, but the out of position Kasimir Kaskisuo made a great save with his paddle, keeping it a one goal game. The scoring in the first was not yet finished as Leksand would ripple the mesh two more times in quick succession, late in the frame, to carry the 3-2 lead into the first intermission.

The second frame would not see a stop to the action as both teams kept pushing and playing a physical game. Linköping would be the only team to score in the frame though as Vilmos Gallo and Chritsoffer Ehn both found the back of the net to restore the lead. With the two goals Ehn registered his second of the game and Gallo added to his point total as he had an assist on Maxwells goal in the first.

The third period continued the high paced action as both goaltenders continued to be put to the test and both made numerous impressive saves. It was Max Veronneau, with his second of the game, who was first able to find the back of the net in the frame with just over five minutes elapsed. Not to be outdone, Vilmos Gallo potted his second of the game about seven minutes later to restore the lead for Linköping, unfortunately for them, they would not hold on for the win. Martin Karlsson responded just over a minute later to tie the game at five goals a piece. That would be the last of the scoring in regulation as the game would need an overtime frame.

The overtime frame, despite a couple of good opportunities for both teams, would not see a deciding goal scored. The shootout was no dissapointment either as Kasimir Kaskisuo made another incredible paddle save against Henrik Törnqvist to deny to go ahead goal. Max Veronneau then stepped up and was able to score the only goal of the shootout to give his team the win and claim the extra point. 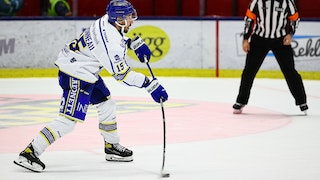 Saturdays game against Rögle would be a bit tamer than the previous matchup, but Leksand put forth a good performance none the less. This game was also important in regards to the standings, as Leksand sat nine points back of Rögle coming in to the game.

The first and second periods did not see much action as far as scoring is concerned. Justin Kloos would be the only player to score in the opening 40 minutes and he did so late in the second frame to give Leksand the 1-0 lead heading into the final frame of regulation.

The third period would be a bit of a different story though. It did not take long for Leksand to jump out to the two goal lead as Calle Själin found the back of the net just over two and a half minutes into the frame. The lead would then be extended just 30 seconds later and Emil Heineman would ripple the mesh to put Leksand up by three. Rögle would get on back later in the frame, but that would be all the offense they could muster. The nail in the coffin was hammered home by Max Veronneau who restore the three goal lead and Leksand would cruise to the 4-1 victory.

With the win Leksand now sit six points back of Rögle and will look to leap frog over Skellefteå and into third this week, as they trail Skellefteå by just a single point.

The top story of the week off the ice this week is the return of Éric Gélinas to Rögle.

– I am very excited to be able to welcome Éric home to Ängelholm and Rögle. He is a top player and a very good guy for our group. He will strengthen our back line-up, says Rögle's sports director Chris Abbott.

Gélinas stint in the SHL began back in 2019 after coming over from the KHL. Since then he has played 90 games, scoring 14 goals and adding 42 assists with Rögle. This season he was hoping to crack the roster with the Carolina Hurricanes, but was instead sent down to their AHL affiliate.

Luleås assistant coach Henrik Stridh has been given a contract extension. This extension comes on the heels of the extension that was given to head coach Thomas Berglund.

– Just like I said when we extended with Bulan last week, we are very satisfied with the work that Henrik and our leaders do in the daily operations. Therefore, it feels fantastic that we will be able to continue with continuity within our entire strong leadership team for the coming seasons, says Luleå's GM Stefan "Skuggan" Nilsson

The contract will see Stridh stay with Luleå until at least the end of the 2025 season.

No surprise here as forward Jonathan Johnson has been offered a contract extension with Skellefteå. In just his second full SHL season, Johnson has impressed with 20 points (4 + 16) in his 22 games played.

– Jonathan is a smart and skilled player that it will be fun to continue working with. A player who makes his surroundings better and has taken big steps in the meantime here. We recruited him as a top player in the HockeyAllsvenskan and he is well on his way to becoming a top player in the SHL as well, says Skellefteå's GM Erik Forssell.

The contract extends until the end of the 2023/24 season. 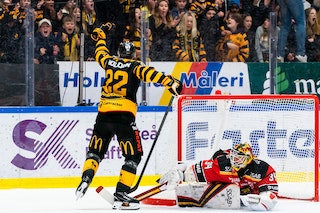 The young Olli Nikupeteri has signed a contract with Luleå that will see him remain with the team until the end of the 2023/24 season. The 19 year old Finn is in his first SHL season and has played in 16 games, scoring one goal.

– It feels great that we have contracted Olli. He is an exciting player with a high level of skill and great development potential. He also works hard and it will be very fun to follow his further development with us, says Ulf Engman, vice GM.