He is from a family of hockey and he has been pretty much raised within the Färjestad walls. Tthis season he has moved out of any possible shadow to become one of the most interesting offensive defensemen currently in the SHL. Meet Albert Johansson.

There are a few teams with a special aura and Färjestad BK has that kind of aura. There's a familiarity to the team and the organization, and despite the nine Swedish championships and the stature that comes with it, the small, genuine feeling is there.

"I've been here all my life, so I don't know what it is like to come here from another team. But I get the feeling that the players who come here feel very welcome and well received." defenseman Albert Johansson says. "I think that comes down to everyone working in the organization and with and around the team. There's a harmony here that makes everyone feel welcome. It is like you create your own little family."

He adds: "There are high expectations in Färjestad and those who come here know that. But you can create harmony to reach your goals, and that's something Färjestad are very good at."

Despite the harmony in the organization, Färjestad opened their season poorly, losing four out of their five first games. However, after the Karjala Tournament break, something has changed:

"We've been playing well over the past few games, but there are still games where we are not up to standard. Since the break, we haven't changed a lot. All we've done is to clarify to everyone understand what they are to do. And when everyone understands, some errors are eliminated automatically. And as a result, many guys are playing better."

On paper, Albert Johansson plays his third SHL season, but to be fair, that first few strides on an SHL rink lasted five seconds. They came in the 2018-19 season opener against Skellefteå. The real debut came October 3rd 2019 against Djurgården - and Johansson notched an assist right away, as he did in the very next game as well. And he did play most of last season in the SHL. In 42 games, he scored twice and added eleven helpers. How was the transition from junior hockey to playing with men?

"The thing you notice right away is the speed. As a d-man you quickly notice that the forwards you're facing are way more skillful. You have to think one step ahead all the time, because when they get the puck, they almost instantly know what to do." Johansson says.

And this season, speed has indeed been key. The breakouts are faster, and transition play is important to not get bogged down when you reclaim possession.

"Most teams want to breakout fast to get the puck deep. I think that's what most games this season have been like. Almost nobody takes the puck back to calm things down. Instead, you break out fast to put pressure on your opponent." Johansson says. "Most teams are very good at closing down the middle and to kind of steer the play to the boards. So if you don't break out fast, the opponents will be there to slow things down." 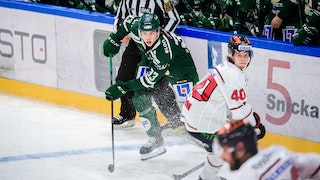 "The difference was massive. It didn't feel like the last game of the regular season, it was more like an exhibition game. This will be something to think back on one day, playing in empty arenas. With no fans, no songs in the stands. It's weird." Johansson says. And this season, with games being postponed, and teams forced to "breaks" as the pandemic cause problems, Johansson thinks there's one thing teams need to be excelling in: Special teams.

Albert Johansson isn't the first in the family playing in the SHL. His father, Roger Johansson, played 401 regular season games and 65 playoff games over 12 SHL seasons in a career that also took him to the NHL, where he played for the Calgary Flames and the Chicago Blackhawks. In Sweden, he won three championships with Färjestad, one of two clubs he represented (the other being Leksand). But that doesn't really enter young Albert Johansson´s mind, apart from the ocassional reminder.

"Nah, I haven't thought about it a whole lot to be honest. I've been playing here in Färjestad since I started with hockey. Sure, I've heard 'Oh, he's the son of Ragge', he says using his father´s nickname, "but I haven't put too much focus on such things. I'm me and I have my own name and that's what I want to build. The fact that he's my dad and that he's played a number of seasons with the club and that he's a pretty big name.... Sure, I hear that now and then."

How come you ended up as a d-man? Your brothers both play forwards.

"Well... I don't know, really. I switched positions on a regular basis between forward and D when I was younger. But it came to a point, while I was playing U16 hockey I think. It kind of happened organically. I felt...It was more fun playing there and looking at players like Erik Karlsson, a very offensive minded D-man, I felt that was fitting to me. So I became a defensman." he says as if it was the most natural thing in the world.

And it does look natural. No matter who he plays with - during the season he's been playing with Vojtech Mozik, Jonathon Blum and Sebastian Erixon - he always seem to know when to push forward, when to make the other team scramble. When to wreack havoc.

"It is part of my style of play to find spaces and to jump in on the attack. When you get the puck and you see the other team being out of sync - maybe they've done a line change or so - that kind of presents an opportunity" he says with the hint of a laugh. "I guess that's it. I trust my instinct. But I do want to be an attacking D-man. I know how hard it is to face opponents where the D joins the rush and how difficult it is to defend when they come in as a second, or third, wave of attack." he says.

He continues: "We kind of help eachother out. If my partner goes forward on one shift, I try to cover for him. Then, maybe in the next shift, I go forward."

With three goals and four assists, including some nifty primary assists, Johansson has already exceeded his goal total from last season (2) and he is on his way to beat his point total from last year as well (13). And he is somewhat satisified with his play so far:

"I think it's gone pretty well. I've taken some strides from last season and that was my goal entering this season" he says. And the numbers show that coach Johan Pennerborn has confidence in the 19-year-old, who is now averaging 15:59 minutes of ice time per game, compared to 12:56 minutes last season. 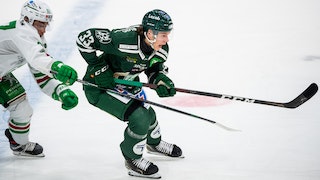 Albert Johansson is one of quite a few Swedes drafted by the Detroit Red Wings over the last few years. And while the NHL might be looming on the horizon, Johansson sits firm in Karlstad for the time being.

"I don't think about it that much. Sure, I keep in touch with them but my focus is on Färjestad. This is where I play and I want to do my best for the team. Whatever happens in a year, in two years, I don't know. I try to live my life here and now." he says.

Our talk is nearing the end but there's one more question to be asked. With all the ice time and exposure comes the media.

What's that like, having to talk to all the media?

"I don't mind it. I guess that's part of hockey to do an interview here and there."

Favorite Movie:"Oh, I'm no movie guy. But if I had to choose, I'd say the Beck movies. I like crime movies."

TV Show: "I don't have a favorite, really. The last one I watched was 'Top Dog'. It was really good.'

Music Genre: "I listen to everything, except maybe heavy metal."

NHL Team: "I'd be stupid if I said something other than the Detroit Red Wings, right? Hahaha!"