After a rough streak and at risk of falling further behind the top six, Djugården bounced back this week and outscored their opponents 7-2 on their way to a full six points

Coming in to the week, Djurgården had lost six of their last seven and were at risk of falling further behind the top six if they weren't able to turn things around.

Their first matchup of the week came against Leksand back on Thursday night. The second matchup of the season between these two teams would prove to be a similar outcome to the first. Unable to score against the Stockholm team in their first matchup, Leksand dropped that game 4-0. Unfortunately for them, they would once again fail to find the back of the net. Despite being outshot in two of the three periods, Djurgården managed to score in the first and the third and got a great performance between the pipes from Niklas Svedberg and came away with the 2-0 shutout victory. 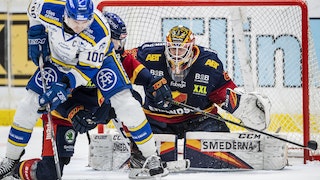 Coming up against a bit of a tougher opponent on Saturday evening, Djurgården was looking to extend their winning streak to three as they visited Örebro. They got the start they were hoping for as they scored four in the first two frames and carried a confident 4-1 lead in to the third. Örebro came out hard and fast in the third and held Djurgården to just one shot on net all frame. Unfortunately for Örebro that shot found the back of the empty net and Örebros effort in the third was not enough to mount a comeback. With the 5-2 win Djurgården now carries confidence and a three game win streak in to this weeks action as they face off against the Frölunda Indians on Thursday evening.

Our game of the week came back on Saturday afternoon as Leksand played host to Rögle. Coming in to the contest, Leksand had suffered five straight losses and had been outscored 22-2 in that span, so they were desperate to turn things around.

The first period was fairly evenly matched as Rögles first goal of the game was waived off due to goaltender interference. The game looked as if it was going to be locked at a scoreleless tie at the end of 20 minutes, but Anton Bengtsson redirected a shot that rippled the mesh with 19 seconds remaining in the period. Rögle would head to the first intermission on top 1-0.

The second was much of the same as the teams exchanged chances and Leksand was able to tie things up on the powerplay after a perfectly placed wrist shot from Daniel Gunnarsson found the back of the net. Not to be outdone, Rögle was able to regain the lead just 21 seconds later as Daniel Zaar broke into the offensive zone and ripped a wrist shot past Axel Brage. Rögle had a number of chances to increase the lead to two, including a shot off the cross bar and a wide open missed net, but the game would head to the third 2-1 in favour of Rögle. 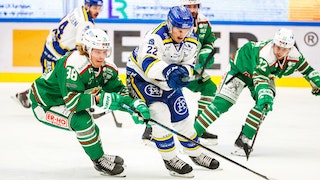 Leksand looked like a team desperate for a win in the third as they came out firing on all cylinders. They got the chance they needed as a penalty shot opportunity was buried by Marek Hrivik and just 63 seconds later Jonas Ahnelöv finished off a beautiful give-and-go opportunity with Mattias Ritola to give Leksand their first lead of the game. Paired with the two tallies, Leksand held Rögle to just a single shot in the frame and held on for the 3-2 victory and grabbed a very important three points.

Leksand will look to continue their success this week with matchups against Oskarshamn and Skellefteå.

Luleå moves in to top spot with an impressive performace this week, knocking Frölunda down to second. Färjestad has moved up to third and knocked Örebro into fourth and HV71 and Rögle remain fifth and sixth. The only other change in the standings is Leksand leap-frogging over Oskarshamn into thirteenth overall.

Check out this weeks top goals and saves.