Three game days in a row provided plenty of action for SHL fans this weekend. Thursday kicked things off with 5 games, Friday boasted just 1 game and all teams were in action on Saturday.

Luleå continues to sit atop the standings and became the first team to break the 60 point mark this season with their shutout victory over HV71 on Thursday night. But we have a tie when it comes to the top performing team of the week.

Both Linköping and Djurgården improved in the standings, moving up two spots. Linköpings recent woes looked like they were bound to continue after going down 3-0 in the first half of the first period against Örebro on Thursday night. However, they fought hard and were able to battle their way to overtime where a nifty little move from Broc Little secured their two points. They followed that up with a 3-1 victory over Rögle on Saturday to propel themselves in to fifth overall with 56 points. Djurgården continues to impress as they posted back to back wins in their home and home series against Brynäs. They now sit fourth overall with 57 points.

Djurgården also grabs game of the week honours on the english world feed. The first leg of the home and home against Brynäs kicked off Friday night in Gävlerinken arena in Gävle Sweden, as NHL veteran Jason Garrison would have a big impact in his first SHL game. The first few minutes gave the impression that Brynäs might have a long night ahead of them as Djurgården heavily outshot the home team in the first ten minutes, and were rewarded as Jonathan Davidsson took the nice feed from Axel Jonsson-Fjällby and made it 1-0. Djurgården followed that up with a couple more quality scoring opportunities, but Joacim Eriksson proved tough to beat. Despite Djurgårdens dominance, Brynäs was able to regain some momentum and tie things up after a hard shot from Nicklas Danielsson at the line found its way top corner against Adam Reideborn. The game would head to the first intermission locked at 1.

Joacim Eriksson continued to impress in the 2nd period, facing 14 shots, making numerous highlight reel saves and keeping his team in it. However, he was unable to remain perfect in the 2nd as Emil Bemström would walk off the corner boards and send it to Jason Garrison in the slot for the first of his SHL career.

Despite a solid effort in the third that saw them pepper Reideborn with 12 shots in the frame, Brynäs was unable to tie things up and fell 2-1. Joacim Eriksson faced 35 shots in the game and was, in my opinion, the standout player on the ice for either team.

Djurgården has another home and home series next week, as they take on Malmö on Tuesday and Thursday night. 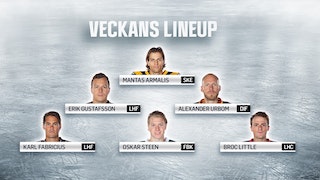 Top line of the week

One of the best players on the ice this week for Skellefteå, Armalis posted a .982 SV%,making 56 saves on 57 shots faced, including a 36 save shutout against Växjö on Thursday night. He was the easy choice for our top line goaltender.

Our first of two Luleå players in this weeks lineup, Gustafsson lead the team in time on ice and scored 1 goal and 2 assists in this weekends action, helping his team grab 4 of a possible six points. Gustafssons play was enough to land him on the weekly top line for the first time this season.

Not only did he contribute on defence, holding Brynäs to just one goal in Djurgårdens back to back victories, he also added 1 assist and earned his first weekly top line honours this season.

A solid effort from Färjestad this weekend was helped by the all around good play from Oskar Steen. Scoring twice and adding 2 assists, he also registered 4 hits in their 2 victories this weekend. Steen finds himself on the weekly top line for the first time this season.

Our second Luleå player this week is also a first timer on the weekly top line this season. The veteran Fabricius is having one of hi best seasons offensively, helped by this weeks performance as he lead the league this week with 3 goals and 1 assist.

The only returning player to the top line this week is Broc Little for Linköping. He was crucial in Linköpings come from behind victory against Örebro, setting up the game tying goal, and scoring the OT winner. He also added a goal and an assist in their victory over Rögle. He was an easy pick for this weeks top line up.

Check out this weeks top saves and best goals!