Discussing hockey, family, life in Sweden, and what it's going to take to improve upon last years success, Cam Abbott is excited to be back behind the bench for his 2nd full season with Rögle.

Having finished in the bottom 4 spots the previous three seasons and having avoided relegation in 2017, the first full season behind the bench for Cam Abbot brought along with it some nerves. However, having taken over the job the previous year, he wasn't without experience and he had a familiar face in the GM's box to help tackle the burden of turning the team around. The Canadian did feel the pressure to perform well as the new bench boss in his first full season and is proud of how things turned out.

– We had about 30 games the previous year to try and make some improvement. Chris (Abbott) and I at the same time took on this challenge, going in to that first full year, a lot of excitement and a lot of naivety perhaps too, but I'm still proud of the approach we had. Lot of high expectations going in to last year. Season didn't start the way we would have wanted, we worked through that and we're pretty proud of getting in to the playoffs. But we've got an awful long ways to go and are excited about this season. 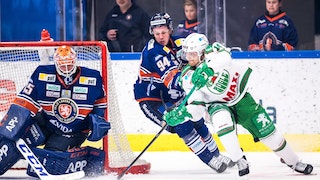 Finishing 9th overall in the regular season standings and grabbing just the second post season berth in team history, last year is easily considered a success for the rookie coach. However, now with a full season under his belt and having made some key roster acquisitions late last season and in the off season, Cam is hoping that this years team will not only recreate the success of last year, but far surpass it.

– We need to execute, I think we've got a stronger team, a more complete team than we did at this time last year. We're much more prepared, so now it's just making sure the guys have a positive energy and are excited to play each night, compete for eachother to win more hockey games than we did last year. We want to be the top of this league and give ourselves a chance to play in the playoffs and as we've seen, anything can happen there.

With Cam behind the bench, his twin brother Chris as the GM and Cory Murphy as one of the assistant coaches, they have a combined 537 games in the SHL as players. Not only are they experienced in this league as players, they bring something else to the table that no other coaching or management staff in the league have... They're Canadian. All three played 4 seasons in the NCAA and Cory Murphy has 91 NHL games under his belt. Having grown up playing the North American style of hockey and having plenty of experience in the SHL, Cam believes this gives them a unique perspective on the game compared to other bench staff in the league.

– I think with Chris and Cory and Jany (Larsson), they've all won SHL championships as players, I'm in good company with them there. I think it's a good combination, we understand the small parts of the game playing over here as maybe some guys jumping in from North America wouldn't. All three of us and Janny as a fourth, have done the majority of our professional hockey overseas so we're pretty comfortable with how the game is played and what it takes to win in the SHL.

Despite a decent contingent of North American talent from year to year, it seems difficult for the league to keep a lot of their North American skaters in the SHL. A large number of Canadian and American players seem to move around the continent rather than stay in one place. In fact, since 2017 the league has seen their North American talent go from 61 players to just 30 this season. However, when it comes to Cam and Chris Abbott, that was not the case. After starting their European careers with one season in Norway, they spent the rest of their playing time in Europe here in Sweden.

– We had a terrific season here playing in 08/09 and then I had six great years in Luleå, Chris a further two in HV71. It's been an amazing country to live in and league to play in. I met my wife here, both Chris and I are raising our families here. A lot of it is home to us. As far as coaching, I've enjoyed coaching the junior level and this has been a great challenge so far coaching at this level.

The North American contingent of players is at its lowest point this season since 2011/2012. With a seemingly mass exodus of North American players over the past two seasons in particular, Cam believes the league certainly has the ability to attract more Canadians and Americans to the league. However the main obstacle in the way, according to Cam, is the home grown talent right here in Sweden. 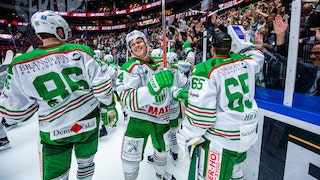 – The Swedish Hockey League is a very challenging league to come in to and have success as a North American player. You have to respect how good players are here, the Swedish guys and other imports. It's a very tough league to find success in. So there's definitely opportunities for North American guys, but at the same time there's an awful lot of good young Swedish players that deserve these jobs, but I think there's a good balance here right now.

At just 35 years old, Cam is the youngest coach in the league. With a young family, a Swedish wife and a life built here in Sweden, he is hoping that a long career behind the bench in the SHL is in the cards. However, just like any professional player or coach, it's impossible to predict what the future may hold. So for now he is just enjoying life in the moment and taking things day by day.

– I certainly enjoy every day right now, it's not a job for me it's a passion and it's a lot of fun. I tend to take things with my wife and family on a year to year basis, not to much further out than that. We've got a young family, we love being here and I love my job right now so I certainly hope it can keep going in this way and we can find even more success. 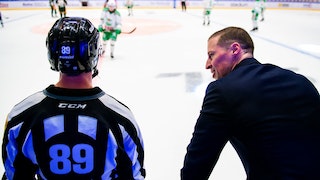 As a Canadian living and working in Sweden it's near impossible, especially as a coach or a player, to get back home to visit friends and family during the season. However, Cam was able to take his family back home during the off season for a bit of rest, relaxation and some time away from the game.

– Off season was great, was able to get back to Canada to see some family. We've got three young kids so we flew back to Canada for four and a half weeks. Able to spend some time with family and get away from hockey for a little bit was nice. Get out on the water and do some fishing, played a bit of golf. We had a great time this summer.

Favourite TV Show : Don't watch much TV, but I'd have to say NHL on the Fly

Movie: What ever is on really

Dream Car: Not much of a car guy, but give me a nice Silverado or GMC Denali and I'll be fine.

So far Rögle have had a decent start to the season, opening things up with 6 of a possible 9 points in their first three games. They continue their 2019/20 campaign on Saturday as they visit Linköping