With an incredible run over the past month, the Linköping Hockey Club has set their sights on a post season berth and a very important win this week has given them a shot. On the other hand, we now know one of the two teams who will be playing in the relegation series.

Just over a month ago, LHC was looking like they were going to be facing relegation as one of the bottom two teams in the league. However a five game win streak has lifted them out of the bottom two and given them a shot at claiming a spot in the playoffs for the first time in two years. This past week featured one of the most important games of the season for Linköping as they faced off against one of the teams they were chasing, Djurgården.

Coming into the game LHC had not beaten Djurgården since October 15th and had suffered a pair of big losses at the hands of the team from Stockholm. After a goalless first period the teams exchanged quick goals in the first half of the second frame as Patrik Lundh and Rhett Rakhshani scored for their respective teams less than 90 seconds apart. Jaako Rissanen would break the deadlock to give Linköping the one goal lead heading into the third frame. Less than a minute and a half into the third, Rissanen was able to beat Mantas Armalis once again with a sharp angle shot and increase the lead to two. A final offensive push from Djurgården netted them another goal but they could not complete the comeback and Linköping came away with a huge three point win to narrow the gap in the standings.

Djurgårdens second game of the week and final game of the season came on Saturday afternoon against Färjestad. A win would force Linköping to win both of their remaining games in regulation in order to pass Djurgården in the standings. Unfortunately for Djurgården, they were unable to muster a win and will now have to wait and see whether or not they will make the post season. 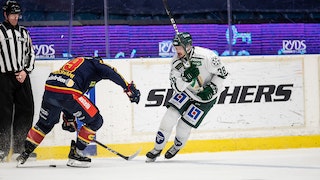 Another team on the brink of the playoffs is the Malmö Redhawks. Coming into the week the team had seen their best run of the season, with seven straight wins. However, the streak was put on hold due to a COVID outbreak but they were back on the ice this week trying to capitalize on the games in hand they had against both Linköping and Djurgården. Unfortunately for the Redhawks they managed just a single point in their four games this week and now have just one game in hand against Linköping.

This week also decided the fate of HV71, who are now gauranteed to be playing in the relegation series. Unfortunately for the long time SHL team they were outscored 16-2 in their three games this week and could be facing relegation to Hockey Allsvenskan for the first time since 1985.

At the top of the standings, Rögle has played their final game of the regular season, closing out the year with a big 4-1 win over the Växjö Lakers, the team currently in second place. This has been a historic year for Rögle as they hope to claim the clubs first ever regular season title. However, they will just have to sit and see whether or not the Lakers are able to reel them in. With the win on Saturday Rögle will finish the season with 98 points, but the Lakers still have four games to play and sit just five points back of the league leaders. If Rögle finishes at the top of the standings this year, it will be just the second time in the past decade that no team was able to crack the 100 point mark on the season.

The last race with playoff implications in the standings is the race for a top six finish. Luleås pair of wins this week has propelled them past the idle Frölunda Indians and into the 6th and final quarterfinal spot in the standings. With just two games remaining for the Indians, and trailing significantly in the +/- category, Frölunda would need 5 out of a possible 6 points in their remaining two games to avoid finishing outside the top six for the second year in a row. 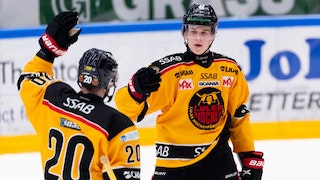