From Canada to Denmark, Norway and now Sweden, Kody Currans hockey journey has taken him all over the world. But he has found success here in Sweden and is hoping to help Rögle win their first ever SHL championship.

With the season entering the home stretch towards the playoffs, Rögle looks poised to improve upon their success of last season. Having finished 9th overall in the regular season, they were able to squeeze into the playoffs for just the second time in club history. Building upon that success this year, they have spent the majority of the season in the top 6, something Curran credits to the teams desire to be the best.

– When you have a core group of guys in this organization that have not had the greatest of success over the years, the struggles we went through last year, we got a taste of what it was like to be in the playoffs. When you bring back a big core group of guys that really want to see this organization have success it kind of lights a fire under your butt to make sure you accomplish those things that you set out to do. We want to be remembered, for the rest of our lives, as the group that could get something really special done.

It's no secret that the success of Rögle has come with the Abbott brothers. In their second full season as head coach and GM they have done nothing but improve the team and brought hope back to the fans of Ängelholm. Their blend of experience with both Canadian and Swedish hockey, Curran says, gives the team a bit of an advantage.

– The great thing about Canadian and Swedish hockey is they're probably the two best styles of hockey. For the most part Canadian and Swedish hockey are very successful and we've got a great mixture of both. The Abbots have played over here and have had success playing under some great Swedish coaches, so they've taken what they like from the Swedish style game and they've also implemented that fast style of Canadian play as well, so I think we have the best of both worlds when it comes to that.

Not only does Rögle benefit from the knowledge and style of coaches with experience in multiple styles of hockey, they are also one of the more diverse teams in the league. With three Canadians, Two Norwegians, a Dane a German and a Czech goaltender, there are lots of personalities and diferent styles of hockey present in both the locker room and on the ice.

– We have a great dressing room with a lot of different personalities, alot of guys with different ideas. I think we have a lot of great hockey minds, we've got guys who have won championships, our coaches have done great things in the game. So it definitely brings some different outlooks on things and throughout the year its been good. 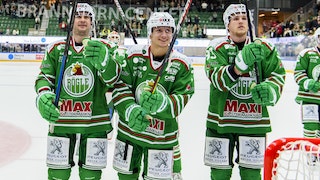 Currently toeing the line of making the top six or falling in to the bottom four playoff spots is certainly on the minds of the Rögle roster. There's one team in particular that Curran thinks are going to be their biggest threat heading into the final stretch before the playoffs.

– For right now, it's the teams that aren't a huge threat to us in the standings that are giving us trouble, the teams that haven't done so well that we've taken a bit to lightly. That's the beautiful thing about this league though, there's so much depth that any team can win on any given night. There's actually not much difference between team one and team fourteen. But as far as threats, I think we can be our own worst enemy to be honest. We need to try and stay humbled and continue to get better through the final stretch. That's what you need to be successful.

Making the playoffs last year was a huge accomplishment for a team that hadn't experienced playoff hockey since the mid nineties. Unfortunately for them they were swept in the best of three series to start the post season and their playoffs were over almost as soon as they started. This season they are looking to improve upon their post season performance from last year and, hopefully, make a deep run.

– I think we've proven to the league, the country and ourselves that we are capable of not only winning playoff games but capable of playing into early May. In order for that to happen, we have to stay healthy. Playoff hockey you have to be playing your best hockey moving into the playoffs, so after this international break obviously we want to be all on the same page, play consistent hockey and really dial things in as far as what we want to accomplish moving forward.

With experience in the ECHL, the AHL, the Danish League, the Norwegian League and now the SHL, Curran has plenty of experience with multiple leagues aorund the world. But here in sweden, he says, is the best hockey he has ever been apart of.

– The American League is the league that would be the closest comparably, the SHL is still better beacuse of the depth and how hard guys work and the amount of skill that's over here. The Danish and Norwegian leagues are good but, no disrespect, you can't really compare them to this league. It's a faster league with more depth, more skill and the conditioning levels are higher. So the American league would be very close, but there's such different styles and the ice size is different, so it's hard to compare. The top end skill in both leagues is close, just because the top guys in the AHL are the high draft picks, so it's very close when it comes to skill. 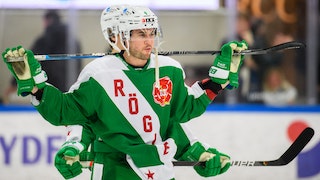 Despite being in just his second season in the league, Curran has quickly taken a liking to the SHL.

– I love this league, to be honest, I love how every team is good. There are teams that aren't having success but I don't think their record does them justice, it doesn't reflect how good they truly are. I love the fact that there's great players on every team and any team can win on any given night. The other thing I love is how defensive this league is, when you look at the point scorers every year, there's rarely players over a point per game. That just goes to show how hard it is to score in this league and I think it gives guys that are a bit more offensive an idea of just how defensive this league is. I love how defensive it is.

Regardless off where he seems to find himself playing, success follows Curran. Back in junior hockey in Canada he won a Championship with the Spruce Grove Saints, he was a two time all-star with the University of Calgary. In Denmark he put up the most goals (10) and points (33) by a defenseman, was named an all-star and won the Championship with Esbjerg Energy. In Norway he put up the leagues best +/- (+51) was named player of the year, playoff MVP and all-star and won the championship with Storhamar. And in his first year in the SHL he scored the most goals (12) by a defenseman. This year he has put up 31 points in 33 games, leads his team in the point category as well as all defenseman and is on pace to eclipse last years total of 37 points. Curran credits this consistent success to a few things.

– Honestly I've had great teammates and have been lucky enough to be on great teams, and that helps with personal success. But for me, I'm 30 now, and something I was taught at a very young age was just always learn. Whether you're getting advice from someone who is 40, or someone you're watching, always try and learn from guys. Never be too naive, I've always been a student of the game, I just try and learn from everybody, because the second you stop growing as a player there's someone behind you that's gunna catch you because you're complacent. I'm just trying to learn every year and learn from every player I see. 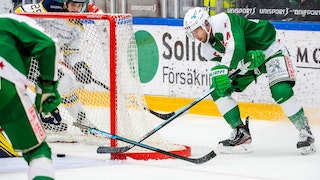 With the success he has found here in the SHL, Curran has quickly become a fan favorite in Ängelholm and many are hoping he'll be on the blue line for years to come. However, right now the future of his hockey career is hard to predict, but one thing is for certain, having success with Rögle this year is first and foremost on his mind.

– As a Canadian and as any hockey player wants, you always want to play in the best league possible. You know, every kids dream is to play in the NHL, so if that's an opportunity for me to explore, I don't think any kid or man in the world would say no to an opportunity like that. Obviously I can't talk about the future or what might be going on with me, but the NHL is something every kid wants to explore, wants to try and if you get that opportunity you gotta make the most out of it. My future right now though, honestly, is I wanna win the last game of the year and go down as one of the only players ever to play in Rögle and win a championship.

Away from the rink, life in Ängelholm has treated Curran and his young family well.

– Living here has been incredible. I've got my daughter and my wife here and it's been absolutely fantastic. The poeple here have been so welcoming and so nice and you get noticed around the city but they give you your space. And our fans are just the best in the league so its been an amazing experience so far.

Home life for a professional hockey player can be hard to balance with such a packed schedule, but Curran takes time to be with his young family and every once and a while gets a bit of time to himself to play video games.

– My wife and me spend alot of time with our daughter, she's 8 months now, so we've got our hands full with that, but it's so rewarding for us learning how to be new parents. We love to go out and go for fika as well. Every once and a while I'll jump on and play some Fortnite with some guys from the team, we actually have a dad crew we call it. Me, Teddy Brithén and Dennis Everberg all have young kids about the same age and they all go down at the same time, so we'll jump on and play some nights. Spending some valuable time with family is important. You gotta get away from the game for a bit, sometimes it can really drag you down and it can run a high emotion on you, so it's good to get away and spend time with family. 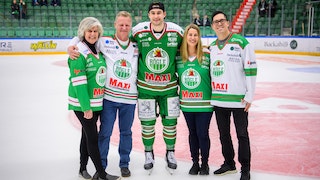