Despite 3 games days this week, the standings saw very little change over the past 7 days. A number of teams dropped and just one team made significant gains.

3 game days and a total of 20 games provided plenty of action this week in the SHL, however, with all that action the standings look relatively similar to this time last week. Luleå and Färjestad reamin 1st and 2nd overall respectively, Frölunda and Djurgården sit 4th and 5th and Skellefteå moves in to the top 6 with 61 points. Our top mover this week, however, takes over sole possesion of 3rd with a trio of regulation wins.

HV71 kicked off the week with a bang on Tuesday evening as they handed Timrå one of their worst losses of the season, coming away with a big 7-1 victory at Kinnarps Arena. They then hit the road for a showdown in Mora where a goal in every frame was enough to propel them to a 3-2 victory. Their toughest challenge would come at home on Saturday evening with the Frölunda Indians in town, but 3 goals in less than 90 seconds in the 1st period would pave the way for their 5-3 victory and secure their final 3 points of the week. Anton Bengtsson lead the way for HV71, scoring 3 goals and adding 2 assists in their 3 games this week. With their stellar performance, HV71 now sits 3rd in the standings with 67 points overall, just 2 back of the league leaders.

Our game of the week on the English world feed comes from Vida Arena in Växjö Sweden as the Lakers welcomed Linköping back on Tuesday night. Neither team had been performing as well as they would've hoped heading into the matchup. With the Lakers having lost 4 in a row and Linköping losing 3 of their last 5, both teams were looking to turn things around.

It didn't take long for the home town team to start things off as Roman Horák was able to beat Jonas Gustavsson short side with just 30 seconds elapsed in the first frame. Julius Junttila would follow that up about 5 minutes later with a one timer off a beautiful cross ice feed from Daniel Brodin to put them up by a pair. It looked at that point as if the Lakers might run away with it, but some solid play from Gustavsson between the pipes allowed Linköping to compose themselves and regain some momentum. Things started to turn in favor of Linköping with less then 5 minutes remaining in the 1st. The Lakers would take a pair of penalties in the final five minutes and Linköping exploded on the man advantage, peppering Viktor Fasth with 11 shots on goal in the two powerplay opportunities. Fasth was making saves left and right and looked all but unbeatable. Linköping would finally be rewarded with just over a minute remaining in the frame as Nick Sörensen fired a wrist shot that found its way through to pull them back within 1.

After the 1st saw Linköping put 19 shots on net, things evened out in the 2nd with both teams exchanging chances and both goaltenders standing tall. Despite a few powerplay opportunities in the frame, neither team was able to find the back of the net.

The 3rd period was all Linköping as they came out looking to tie things up. Viktor Fasth continued to play well between the pipes and looked as if he going to be the deciding factor in the game as the Lakers failed to put a single shot on target all period. With not much to do, Gustavsson was pulled with about two and a half minutes to play. The extra skater on the ice proved to be the difference for Linköping as Joe Whitney rippled the mesh and sent the game to overtime.

Linköping wouldn't wait long to complete the comeback as Nick Sörensen moved in to the offensive zone with speed, pulled it around Fasth and found the back of the net with just 20 seconds elapsed in the extra frame. It was Sörensen's second OT winner against the Lakers this season. 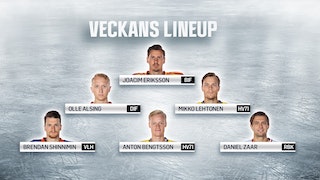 Joacim Eriksson saw action in all 3 games played last week. After replacing David Rautio on Tuesday night, Eriksson allowed just 5 goals in 8 periods played, won both of his starts and posted a .943 SV%, earning him his first top line nomination of the season.

Alsing was the top scoring defenseman this week with 1 goal and 4 assists in 3 games played. His solid play was a big factor in the victories over Färjestad and Timrå and he was also +5 on the week. Those numbers made him an obvious choice for his first top line of the week honours.

Lehtonen makes an appearence on the top line for a second week in a row due to outstanding play this week. With and average time on ice of 21:25 and coming out +5, he was a big contributor to all 3 of HV71's victories over the past 7 days.

Coming into Saturdays game against Rögle, the Lakers had posted 6 straight losses. But thanks to a 4 point game by Shinnimin, including a hat trick and an assist on the game winning goal, the Lakers were able to snap the losing streak. His 4 point performance earns Shinnimin his first top line nomination.

Grabbing all 9 points this week, it's no surprise another HV71 skater makes an appearence on this weeks top line. Leading all skaters with 3 goals and 2 assists this week, including the game winner against Frölunda, Bengtsson easily earns his second top line nomination this season.

With a goal and 4 assists this week and being a crucial factor in their victory over Skelleftea and Vaxjo, Daniel Zaar was an obvious choice this week for his first top line nomination of the season.

Check out this weeks top goals and saves.

Looking ahead to this week, there will be no SHL games as the league goes on break. However, the Frölunda Indians will be competing for the CHL Championship on Tuesday as they face off against Red Bull: Munich in Scandinavium.